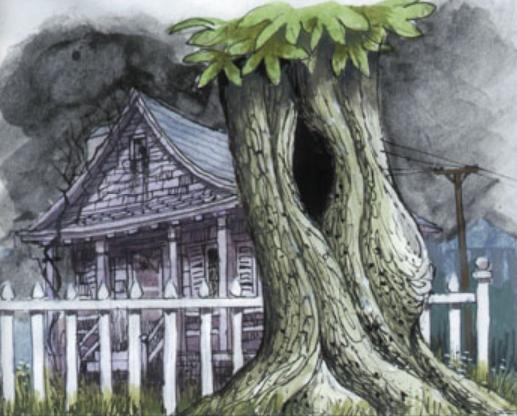 Illustration of the tree in front of Boo Radley’s place in “To Kill a Mockingbird.”

Chain letters have never meant much to me. But at the core of the chain letter concept is something I do consider exciting–to receive a letter unexpectedly, for no compelling reason, and then to send something similar on to another person, so that they too may experience the same gratification.  Thanks in part to a friend of my son’s, whom I shall call Gavin, I once conceived and attempted to implement a more rustic, local, and personal form of “chain letter.”  If it had been successful, I hoped that my innovative form of communication would embody the drama of the chain letter—coming across an unexpected communication–without the accompanying threats of ruination, dismemberment, or death.

Instead of glancing at their cellphones or GameBoys while walking around the streets, everyone would be furtively eyeing the trees, searching for evidence of that crevice or fissure that might hold a secret treasure.

Gavin’s mom dropped him off at our house several mornings a week before breakfast so that she could head off on her long commute to a teaching job in another town. Gavin and Jacob were in the same grade—second grade when this arrangement began and third grade when the “chain letter” concept emerged. I was the one who typically prepared breakfast for Jacob, and we assured Gavin’s mom that it was no more difficult to feed two boys than one.  Gavin would sit quietly, playing with his GameBoy or otherwise fiddling around for a half hour or more until I woke up Jacob and he got dressed and came downstairs for breakfast.

One day, Gavin told us that he had borrowed a ballpoint pen from one of his buddies. For some reason, his buddy wanted him to return it to him by leaving it in the rather prominent knothole of a tree that was located on the walking route from our house to the elementary school. I never verified if the return of the pen took place the way Gavin described the plan—Gavin did occasionally make assertions that pushed the lines of credibility. For instance, I had bought some hot sauce that was so off-the-charts that Jacob and I found our faces flushed and eyes watering after tasting just a tiny bit. Gavin said he would be glad to take it off our hands, and when he returned the next week, he said he liked the flavor just fine and had already used up most of it on his sandwiches at home.

Whether Gavin’s friend truly picked up the borrowed pen from a knothole in a tree or not, I thought it was an intriguing notion, and so did Jacob. It occurred to us that if you could leave a ballpoint pen in a knothole, you could also leave a note. Why not try it? It also reminded me of how the kids in “To Kill a Mockingbird” used to exchange messages or gifts with the character named Boo Radley.

This was in November and we had a lot of extra candy from trick-or-treating that Jacob was never going to eat. So why not sweeten the communication by including a mini-Twix bar or a Hershey’s kiss? 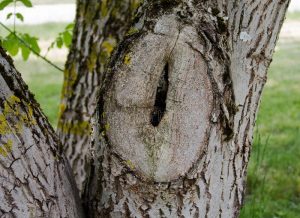 Jacob and I composed a few brief notes, with messages such as: “Hello from a neighbor.  We hope your day is going well. Enjoy this candy. When you get a chance, place your own note back in the knothole soon!  No candy necessary.” After we agreed on the wording, I typed them out and printed them and we folded them up and taped them to the wrapped candy. We started with four notes, with slight variations in wording from one to another.

The fun part was checking the trees in the neighborhood for good knotholes. The ideal knothole would be big enough to place the note without it blowing away but not so deep or dark as to make it completely invisible. We wanted passing pedestrians, especially kids, to notice that there was a piece of paper visible in the tree’s trunk.

We had no trouble finding four different trees in which to place our notes, scattered among the few blocks near our house. Since we lived near the public school, there would be plenty of child and family foot traffic passing by our selected delivery locations.

The next day we went out after school and checked each of our delivery spots. Every note (and candy) had been taken! That was a good sign. All we had to do was check for notes in those same places in the days ahead. Meanwhile, we would place more notes.

We placed additional notes in the same trees and in different trees, but we did not find any notes placed by anyone else. We speculated that parents might be suspicious of notes containing candy, given all the warnings about poisoned Halloween candy, so we placed some notes without any candy. We continued for a couple of weeks. All of our notes disappeared quickly, but we never found notes from anyone else. 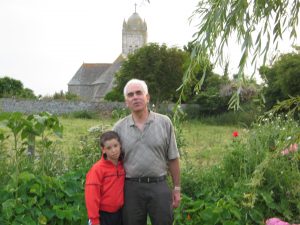 Jacob and I are close in this photo to the age we were during the events described in this story. However, these trees (and the structure behind us) are not in our neighborhood. Not even in our country.

Were we too late? Were there other kids (or adults) in the neighborhood that were finding the notes that others placed before we got there?  This seemed unlikely—but we’ll never know for sure.

My fantasy had been that once a few people began receiving the notes, and reciprocating with their own communication, there would be a slow-building but eventual exponential increase in the total volume of mail circulating around through the secret network of knotholes. I thought if people didn’t cotton to the candy idea, then maybe they might include instead something that wasn’t edible, such as small toys or trinkets wrapped inside their notes, or even a dime or a quarter. I fantasized. I thought. I hoped. But all in vain.

By the end of the month, Jacob and I abandoned our efforts. He never got the thrill of finding a letter hidden in a tree. But thinking back, perhaps he got something else from the experience. In the very first Dr. Suess book, And to Think that I Saw it On Mulberry Street, the protagonist re-imagines his own predictable and quiet neighborhood as one suddenly filled with excitement, as elephants, camels, clowns, musicians and a police escort appear.  In a similar fashion, I hope Jacob was able to imagine our own small-town, unruffled neighborhood as one where, instead of glancing at their cellphones or GameBoys while walking around the streets, everyone would be furtively eyeing the trees, searching for evidence of that crevice or fissure that might hold a secret treasure.

10 Responses to A more rustic form of “chain letter”

Chain of Fools
by Suzy

Not Part of the Chain Gang
by Laurie Levy