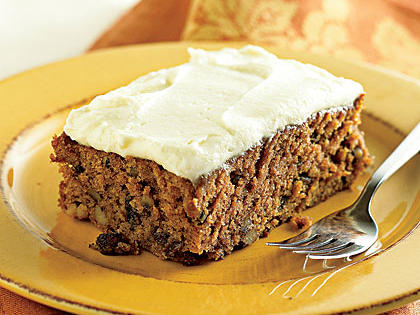 OK, I am copping out this week.  I have barely cooked since law school — and, even then, I took a lot of my meals at the counter of Tom’s Restaurant on Broadway and 113th Street in NY, which was used for the exterior shots of “Monk’s,” the hang-out often seen in “Seinfeld.”  And I only have a few of my mother’s recipes after she died.  Worse yet, the few I recovered, though I always thought were terrific, seem not to have been embraced by my current kith and kin.  To be fair, neither “prunes and chestnuts” nor “kidney beans in red wine sauce” may sound very appetizing to an uninitiated outsider.  But, trust me, the mere thought of them gets me salivating like a Pavlovian dog.

Ironically, applesauce cake is sort of the "Holy Roman Empire" of cakes.  At least my mother's recipe contained virtually no applesauce, and you certainly couldn't taste it.

Anyhow, as a result, I felt I and my Retro readers would be best served (play on words semi-intended) simply by re-cycling my applesauce cake story from a couple of years ago.  My wife has even promised me one for my birthday in a couple of months.  These days, that and the election in November are the two things I most look forward to, at least with any certainty as to their dates.

My mother was a late bloomer as a cook, having had a fairly privileged childhood with cooks in attendance.  But she learned (and loved) to cook herself when she lived with my grandmother in a New York apartment with a typical New York — which is to say microscopic — kitchen while my father was off in China winning WW II.  For all of her delicious, and carefully cataloged, recipes, without doubt my favorite one of hers was for something called applesauce cake (hereinafter, “AC”).

I do not know AC’s “origin story” in family cooking lore.  My mother had the recipe written down on a large index card, but it may have come from a cook book.  I never recall having chosen it, but it somehow became the sine qua non of both my brother’s and my birthday parties.  Thus, to this day, I have a nearly Pavlovian reaction to AC: it brings to mind not just a yummy cake, but pony rides, magicians and the fact that the town always seemed to tar the road in front of our house the day of my birthday party.  (The smell of tar, accordingly, triggers almost the same reaction in me.)

Ironically, AC is sort of the “Holy Roman Empire” of cakes.  At least my mother’s recipe contained virtually no applesauce, and you certainly couldn’t taste it.  In fact, the cake itself was not all that different in ingredients from the dreaded Christmas fruit cake, although much moister. The real lure for me, I eventually realized, was not the cake itself, but the frosting, which was a rich, maple sugar/caramel/cream cheese concoction.  You could have probably spread that frosting on a piece of shirt cardboard and I would have been just as happy to consume it.

I only learned recently that, while my brother also loved the cake, he loved the cake itself and didn’t care much for the frosting.  He mentioned this in passing when my wife discovered the recipe among my mother’s old recipes and suggested that she could make it for my upcoming birthday, which my brother was going to attend.  In her Solomonic brilliance, she made the cake and covered only half of it with frosting. My brother and I were both in bliss while we pondered the Jack Sprat/wife nature of our love affair with  AC.

p.s.  The only image I could find of AC suggested a sheet cake.  However, for whatever reason, my mother always baked it in a Bundt cake pan (i.e., circular with a hole in the middle).  A little tough for inserting candles and writing birthday messages on, but so be it.  A worthy trade-off.