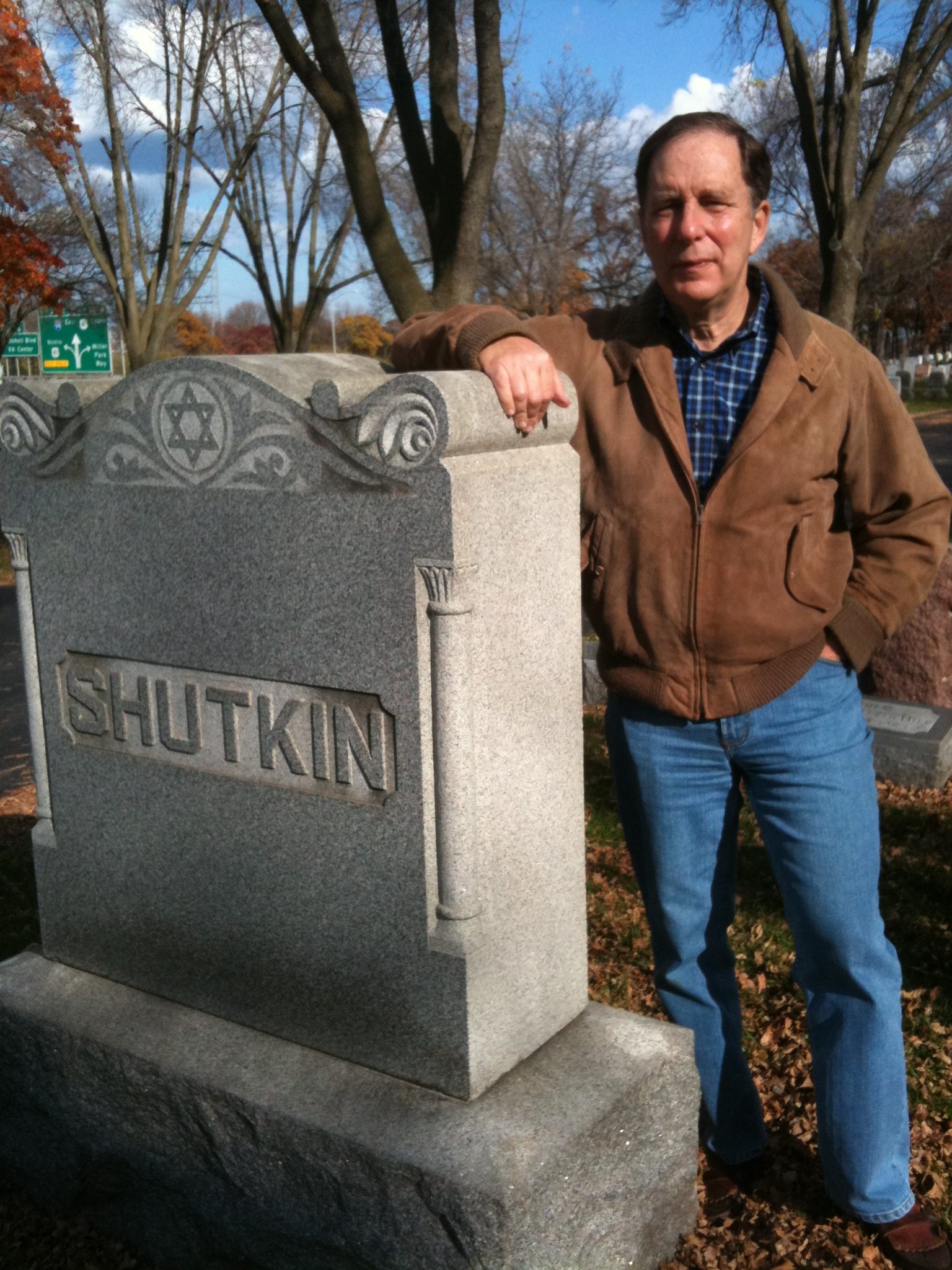 Let me preface my story with a disclaimer.  When I was in high school, a bunch of us were discussing the Holocaust.  At one point, one of my classmates (like me, an affluent and entitled Jew) took a deep sigh and exclaimed, “Yes, we certainly have suffered!”  I kept my mouth shut at the time, but considered the statement to be offensive — indeed,  the height of narcissistic self-victimization.   As I Iater said to my girlfriend (another affluent, entitled Jew), “God knows six million Jews — and many more — have truly suffered, but she [classmate] sure isn’t one of them.”  So please understand that I would never try to suggest that my incredibly fortunate life in any way resembles what Ukranian refugees are now going through.  But, that said, I cannot deny feeling some hereditary connection to their situation.  Here’s why.

I had always vaguely understood that my paternal grandfather, Arthur Shutkin, and his many siblings had emigrated from Ukraine, but I was never entirely sure, and other family members had suggested the possibility that the family was instead from Minsk (in Belarus).  I never really thought about it; I just knew that we were “Russian Jews” on that side of the family and “German Jews” (actually Austrian) on my mother’s side.  However, three years ago, my cousin, who has far more interest in family genealogy than I do, decided he wanted to do some more digging into the life of our common grandfather Arthur. (My middle name is, not coincidentally, Arthur.)  The specific reason for this was that my cousin had  heard stories years ago from his mother (my father’s sister) that, after her mother/our grandmother had died at an early age, Arthur had had a brief second marriage that was later annulled and that there was a bit of scandal attached to it.

So my cousin, a theoretical physicist (are there any other kinds?), went on a research mission into the archives of the Milwaukee  Historical Society — Milwaukee being where Arthur had lived and my cousin grew up.  And he struck gold — no doubt because Arthur was a fairly high-profile lawyer and politician in Milwaukee. He was an Alderman for many years and once ran for Mayor of Milwaukee (and lost in a landslide).  As a result, Arthur’s name was frequently in the local newspapers and, in particular, my cousin found a number of semi-lurid articles about Arthur’s second marriage.

Per the articles (which my cousin shared and I’ve read, but the links to which have now expired), soon after my grandmother died in 1926, Arthur went off to rest — and, presumably, to deal with his grief —   in the Los Angeles area, staying with some relatives who lived there.  While there, he met a beautiful younger woman who claimed she was from Chicago and was vacationing with her “brother.”  She and Arthur had a whirlwind romance, and, several weeks later,  Arthur brought her back with him to Milwaukee (along with her “brother”) and they were immediately married.  But fairly soon after that, Arthur came to his senses and hired a detective who discovered that Arthur’s new wife was not what she apppeared to be and her “brother” wasn’t actually her brother.  In fact, the two were a couple of grifters from Kansas City who had previously preyed on other unsuspecting, lonely men of means. So Arthur then quickly moved forward to annul the marriage.

This is all by way of backstory, as interesting as it may be.  More to the point of this prompt, my cousin was also able to locate in the Historical Society archives the transcript of the deposition that Arthur gave in 1927 in his annulment case.  (Again, I’ve read it, but it is no longer available.)  At the very beginning of the deposition, Arthur’s lawyer asked him the usual background biographical  questions.  And, voila, there were Arthur’s own sworn words that he was born in “Kviv” in 1881.*  He then stated that he lived in Kviv until his family “emigrated” to Milwaukee in 1905.  Hmmmm…

1905 was a very interesting year in Russia and the surrounding “Russified” states, such as Ukraine and Belarus.  As in there was a revolution that year. And Russia, even before Stalin, was a pretty rough place to be a Jew, to put it mildly.  As the linked Wikipedia article notes:

For generations, Russian Jews had been considered a special problem.[10] Jews constituted only about 4% of the population, but were concentrated in the western borderlands.[13] Like other minorities in Russia, the Jews lived “miserable and circumscribed lives, forbidden to settle or acquire land outside the cities and towns, legally limited in attendance at secondary school and higher schools, virtually barred from legal professions, denied the right to vote for municipal councilors, and excluded from services in the Navy or the Guards.”

It does not take much imagination to conclude that Arthur and his many siblings came to Milwaukee in 1905 to escape their “miserable and circumscribed lives.”  Does that make them “refugees” or were they just “emigres,” along with millions of other Europeans of many nationalities, ethnicities and religions in the 19th and early 20th centuries?  To some extent, that is more a semantic question than a political one, given the many forces that compelled Europeans to come to  America at that time. But the Wikipedia article also notes that “some nationalists undertook anti-Jewish pogroms, possibly with [Tsarist] governement aid, and in total over 3,000 Jews were killed.”

In any event, in reading of the daily horrors in Ukraine, and especially of the tragedy of the millions of refugees from Kviv and throughout Ukraine, I could not help thinking to my own grandfather and what he and his siblings must have endured and, ultimately, survived in departing from that country.  And, while I wish again to stress that their suffering in no way translates into my suffering (I have led an entirely cosseted life), I cannot help but feel particularly connected and empathetic to the Ukraine tragedy because of my own family history.

* I was amused at the time that the transcript used what we then considered to be the archaic spelling of “Kiev;” though, with current events, we now realize it is actually still the preferred spelling.

As I’ve previously bewailed, I am the “anti-Betsy” of Retro in having such a pathetic collection of family and ancestral photos.  Indeed, I don’t have any photos at all of Arthur.  So here’s the best I can do:

When my genealogy-minded cousin visited us in Milwaukee about ten years ago, he had a good idea of the cemetery where members of our family had been buried.  So we drove there — it was in the shadows of the Milwaukee Brewers’ stadium, Miller Field, which I thought was pretty cool  — and quickly found a plot, marked by a large gravestone with “Shutkin” on it and smaller stones marking where Arthur, his “real” wife Susie, and my cousin’s parents were buried.  Also cool, though also a little creepy seeing a gravestone with one’s own surname on it.  Anyhow, I posed in front of the gravestone and that is my featured image.

As to Arthur himself, I did come across a photo of him when I was young and was going through a box of old photos my father had in his study. When I first saw it, I though it was my father wearing an all white wig and wire-rimmed glasses; they looked that similar.  So here’s a photo of my father as an older man, and if you can imagine him with all white hair and those glasses, this is exactly what Arthur looked like: 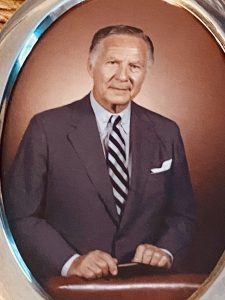 Finally, a couple of years ago I got a message from out of the blue in my LinkedIn account.  It was from a gentleman in suburban Milwaukee named Brian who was reaching out to see if I was related to Arthur Shutkin.  (Sometimes it helps to have a fairly rare last name.)  Brian said that he was cleaning out their house in preparation for a move and had uncovered a huge old safe they had not known was there with the name “Arthur Shutkin” inscribed on it.  Brian knew nothing about the history of it or how it had ended up in their house. It was unlocked and empty, so no chance of riches or family secrets within it. But, before disposing of it, he thought he’d check to see if there were any Shutkins still around and whether they would like to have this family relic.  Here’s a picture of it: 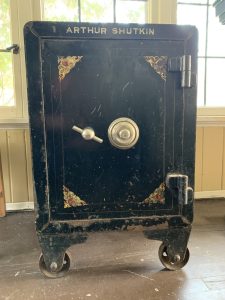 I told Brian that Arthur had been my grandfather, but that I also knew nothing about the safe or its provenance — nor did my brother, cousin or any of the other relatives I then reached out to.  We assume Arthur probably kept it in his law office.  In any event, as curious as a find as it was, none of us had any interest in actually owning the safe, to say nothing of dealing with the cost and logistics of moving it.  (My older daughter was briefly intrigued, but then starting thinking about the risk of it crashing through the floor of her upper floor apartment.)  So, in the end, I thanked Brian for his efforts, but we all took a pass on what is presumably the last vestige of Arthur’s legacy.