Bethany and Beyond by John Shutkin
50
(71 Stories)

Prompted By My Hometown
13 comments.

I think I pretty well covered my hometown of Bethany (Connecticut) in this story from last year.  Plus, Bethany is also touched upon to some degree in my “Dugan’s Man” and “Mrs. Spykman” stories since then. As Bethany is a pretty small town — still just a bit over 5,000 folks — and I haven’t lived there since graduating from law school in 1974, I don’t really have a whole lot more to say about it.  So I will just re-run this story this week.

How small?  Well, 2,000 residents at that time - - and, arguably, even more cows and horses.  That said, it was not quite like that proverbial town that was so small that the "Now entering ____" and "Now leaving ___" signs were painted on the opposite sides of the same sign.

That said, this week’s prompt has made me think more about Bethany and made me want to, literally, re-visit it.  Of course, given our collective COVID19 isolation, visiting any place now would feel pretty great (except maybe Brazil or Mar-a-Lago).  But I think I will wait until the public health situation is a lot better, even though a trip from Massachusetts to Connecticut no longer requires a two-week self-quarantine on return.  Plus, as I live about 150 miles away (a 2+ hour car ride), the bathroom logistics need to be considered.  Particularly for men of a certain age…..

I grew up in the very small town of Bethany, Connecticut, about five miles north of New Haven.  How small?  Well, 2,000 residents at that time – – and, arguably, even more cows and horses.  That said, it was not quite like that proverbial town that was so small that the “Now entering ____” and “Now leaving ___” signs were painted on the opposite sides of the same sign.  In fact, in pure area, Bethany is larger than New Haven. It even had 3-acre zoning when I was growing up — not for estates with pools and tennis courts, but because it was mainly still farmland then.  In many ways, it was a bucolic paradise to grow up in. 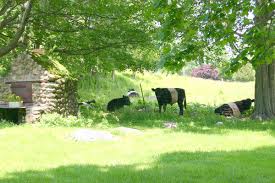 But, in terms of shopping, Bethany was not just small, it was virtually non-existent.  We had two “general stores” with gas pumps.  They had cutesy names like “Pleasant Valley”  and “Countryside,” but they were always just Ivar’s and LaCroixs to the locals, in honor of the folks who owned them.  And they were hardly “general” in their merchandise.  Sure, plenty of gum, candy and ice cream for us kids, but very little by way of grocery staples.  You had to drive to the shopping center in the next town, on the border of New Haven, for that.  There was also one ice cream stand, a Dairy Queen/Carvel knock-off, which later built a pool and a couple of tennis courts and converted itself into a “club” (but still open to the public).  And, not surprisingly, in the summer a few vegetable and fruit stands opened on the Bethany farms; best corn in the world.

And though the “Now entering” and “Now leaving” signs were several miles apart, Bethany had but one traffic light. And it wasn’t really that; it was just a one-light, blinking yellow signal on the crest of the main road to encourage people to slow down as they passed our town churches — Episcopal and Congregational, of course — and Town Hall. (I was able to find a current photo of the Congregational Church, which I annex — and am happy to see it displaying a Pride flag.)

(As an aside, a few drive-throughs in the past decades, as well as some quick googling, indicate that Bethany has now boomed to over 5,000 residents, and now has — I dare not say “boasts” —  a couple of pizzerias, a diner and slightly larger grocery options. But the Mall of America it still ain’t.)

After permanently leaving Bethany when I graduated from law school, I lived for most of my life in its exact shopping opposite: New York City.  In New York, of course, there are so many shopping options that anything more than two blocks away is considered another neighborhood.  And in that two block area, there are always the five New York shopping essentials: a grocery store, a pharmacy, a cleaners and at least one decent pizza and Chinese.

I now live in Bedford, Massachusetts, nestled between Lexington and Concord.  Its population is 13,000 and it shares many of Bethany’s charms, right down to annual town meetings, folks who have lived there for years and know everything about the town. and a small 4th of July parade.  But it also has real live shopping within its four corners, including, besides some good local shops and restaurants — and for better and worse —  a Stop and Shop, a Whole Foods, a CVS, a Starbuck’s, a T.J. Maxx and, this being New England, the ubiquitous Dunkin Donuts.  And, most importantly, an Ace Hardware.  Indeed, when old, old friends of mine ask me about living in Bedford, I smile and say it’s like “Bethany with benefits.”

13 Responses to Bethany and Beyond