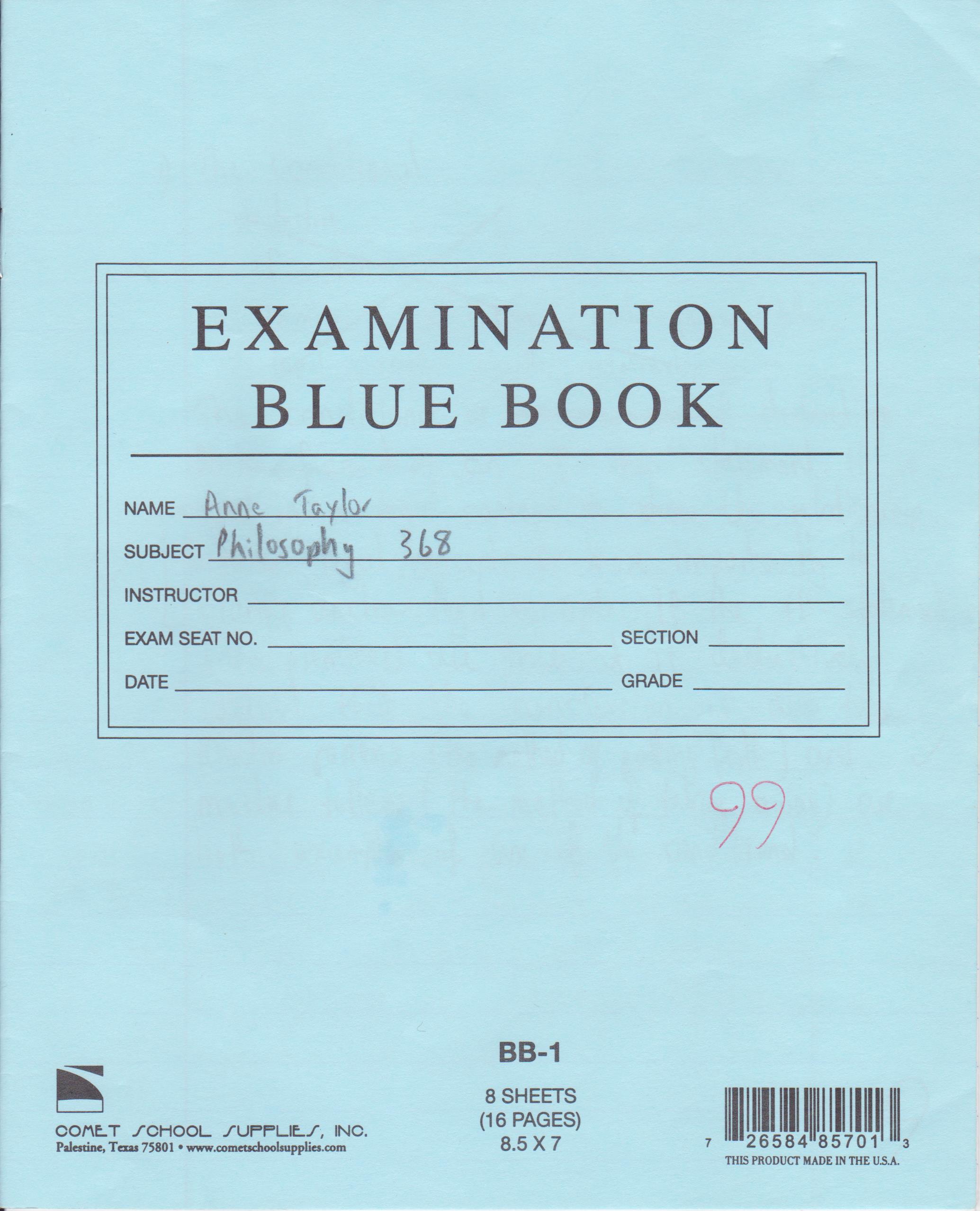 I assume we college graduates of a certain age all have a Pavlovian, and not entirely happy,  reaction to any references to blue books.  Here is my one semi-amusing blue book story.

" [T]he final grades [were to be] based solely on the grades of the papers, but...any student opting for this waiver nonetheless had to show up for the final exam, sign his/her name in a blue book and remain in the exam room for at least half of its 3-hour duration before being allowed to be dismissed.  [The section leader] was apologetic; many of us were apoplectic...

Spring semester of my freshman year, I took Hum 5, a typical lower level gen-ed course on philosophy; you know, all the Great Minds in easily digestible pieces.  The professor who dispensed the wisdom in large lectures was Rogers Albritton, known himself for being a Great Mind, but also for publishing very little; thus he had the sobriquet “Allbutwritten” in academic circles.

I remember even more particularly our section leader, a graduate student named Betty Katz.  She had a huge, flaming red “Isro” (our term for Jewish Afros) and was the archetypal brilliant but absent-minded scholar who could barely get a sentence out before another great idea came into her head and interrupted any coherent flow of her (many) thoughts.

At one point during the semester, Betty announced that, because there were two fairly lengthy papers required for the course, if we felt comfortable with the grades we received on them, we could accept their average as the course grade in lieu of taking the final exam.  That was really good news for me, as I had aced both of the papers and was just fine with my grade.

The bad news came just before the end of the semester, when Betty sheepishly announced that she had failed to timely submit the final exam waiver arrangement to the Powers That Be in the Harvard academic bureaucracy (the “PTB”).  And the PTB were as arbitrary and capricious as those sort of unbridled bureaucracies are.  In their infinite wisdom, they decreed that the waivers would be granted, and the final grades based solely on the grades of the papers, but that any student opting for this waiver nonetheless had to show up for the final exam, sign his/her name in a blue book and remain in the exam room for at least half of its 3-hour duration before being allowed to be dismissed.  Betty was apologetic; many of us were apoplectic, but the PTB had spoken.

But wait; it gets worse, at least for me.  When the final exam schedule came out, I had all but one of my exams clustered at the very beginning of the two-week exam schedule.  However, the Hum 5 exam, pursuant to some corollary of Murphy’s Law, was scheduled for the last afternoon of the exam period.  In short (or long), I had ten days of down time to kill before I had to simply write my name in the damn Hum 5 blue book.

But the Gods were not entirely frowning on me.  It turned out that the Red Sox, fresh off their “Impossible Dream” season, were in an extended home stay during that period, so I figured that I could just go to the Sox games most days and happily kill the time.  (In those days, Sox tickets were very cheap and always available.)  However, I soon found that getting company for the games was a bit problematic.  As soon as my pals finished their exams, they took off for their homes or summer jobs.  And most of my pals who had exams near the end of the period, unlike me, had to actually study for them, so were not too inclined to kill an afternoon at Fenway.  So I went to a lot of games solo, which was sort of fun, but also sort of sad.

Finally, the day came for the Hum 5 exam.  I was all packed and ready to drive home immediately afterwards and went into the exam room and was presented with my blue book.  To her credit, Betty also showed up and explained the situation to the exam proctors, lest they wonder what the reason was for the semi-exodus at the 1 1/2 hour mark.  Still, being neurotic about such things — I still am — besides putting my name in the blue book, I also wrote a fairly lengthy explanation in it as to the situation with the waiver and that I was opting for the waiver based on the advice provided by the PTB. I was also tempted to write something pretty snarky about the PTB and the stupidity of the whole exercise, but, showing greater restraint than I did about several years later when I had my Army physical (the subject of a previous story of mine), I restrained myself.

As I recall, we were at least allowed to bring something to read into the exam room so long as it didn’t relate to the course material.  I was on a Thomas Hardy binge then, so I probably followed the sad fate of Tess or Jude for most of the time.  We were told when the 1 1/2 hour time was up — as if we hadn’t been checking our watches every five minutes — and bravely handed in our blue books, as Betty smiled reassuringly at us.   I was not so sanguine, but, when I got my grades some time that summer, in turns out that the waiver arrangement had been honored.

Still, I never looked at a blue book quite the same, and always felt happier as I was filling page upon page of it with whatever I had to say.