In the true spirit of Ebeneezer Scrooge, I could not come up with much of a story for this week’s prompt. You know, the usual Jewish ambivalence towards Christmas and a slight regret that Festivus is not more of a real thing — because, boy, do I have grievances to air.

"My mother always stressed to my brother and me the importance of cards for "connection" -- staying close to other people in one's life, both near and far."

But then our fearless Retro leader (a/k/a Suzy) suggested I could just send a copy of my holiday card, as it was pretty cute.  So that is my featured image. For those who do not know, this is a photo of a sculpture in the Boston Public Gardens inspired by Robert McCloskey’s famous Boston-centric children’s book “Make Way for Ducklings.”  Frankly, as a kid, I much preferred the stories and illustrations in McCloskey’s Homer Price books (anyone else remember/love them?), but “Ducklings” was by far his most iconic work.

Here is the inside of the card, continuing the book title’s theme and throwing in a bit of Bostonian patois:

And, lest I be accused of being too much of a Scrooge, I should note that all proceeds from the card sales — and I ordered and sent out a couple hundred cards — go to the Dana-Farber Cancer Institute (again, known in Boston parlance simply as the Jimmy Fund).

Actually, as I considered things further, holiday cards are the one tradition of the season that I have always enjoyed — both giving and receiving.  And, as I further considered things, this was yet another something that I really owe to my mother.  (I hope I’m not getting too Oedipal here).

As may be remembered, I posted a couple of holiday cards from my earlier days in response to the baby prompt recently. Here is one of those adorable cards: 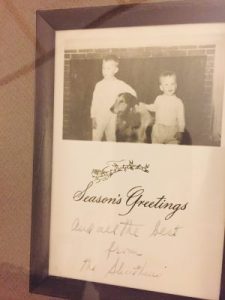 My mother always stressed to my brother and me the importance of cards for “connection” — staying close to other people in one’s life, both near and far.  So, besides spending a fair amount of time near year-end writing checks to what she considered to be worthy causes, she also sent out scores of cards. And always – -so far as I can tell — with personal messages on them as well. And she received tons of cards in return — enough to cover the mantelpiece, all the book shelves and virtually all the empty spaces on the piano and tables in our living room.

I adopted this practice, as was my wont, once I graduated from law school and decided I was officially a grownup.  As my former wife held several lofty professional positions, we sent out an enormous number of “institutional”  cards — God forbid a member of the Barnard faculty did not receive a card from the President — but these were always handled by her office and required nothing of me other than signing off on them (i.e., “Yeah; looks fine.”). But I always handled virtually all of the personal cards, other than those my wife sent to her immediate family and closest friends.  And, as did my mother, almost always with a personal note written in.

After our divorce, I continued with the practice myself, though trying hard not to presumptuously send a card to anyone whom my former wife might consider to be only “her” friend — typically, other prominent people.  This worked out well as I was trying hard not to burn any bridges, either with her or anyone else. And, as one can imagine, I particularly wanted to keep up connections with my own friends at this time.

And, as I think of it, may I please offer this story as my collective holiday card — and personal note, of course — to all my Retro friends.