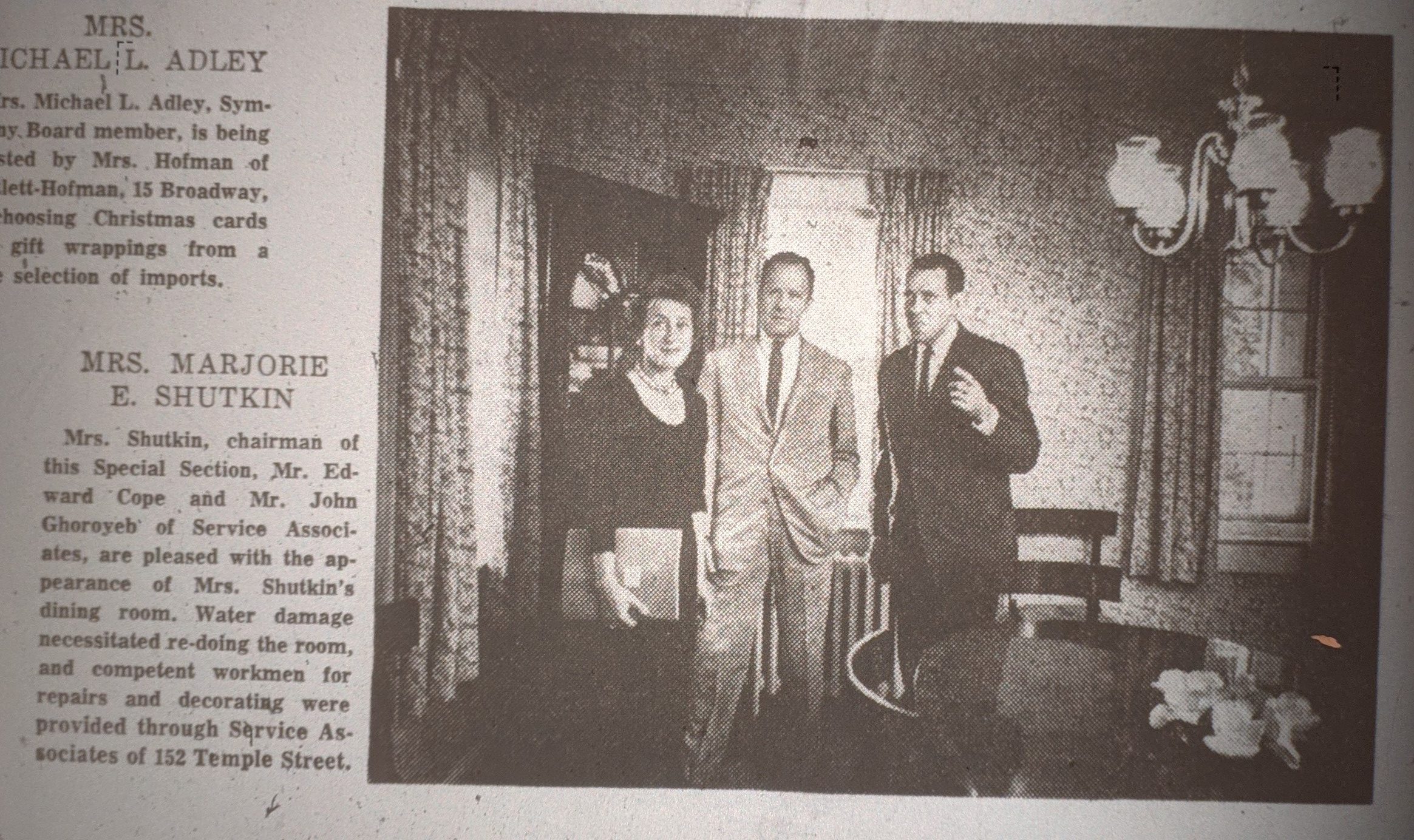 As should be clear to anyone who has read a number of my other Retro stories, my mother was very liberal.  And by “liberal,” I mean not just in the current American political sense we usually associate the term with — pro-choice, anti-war, societal safety nets, etc.  She was also liberal in the more philosophical, John Stuart Mills-ian “On Liberty” sense — i.e., individuals should be free to do whatever they want to do so long as they do not interfere with the rights of others.  Or, as it has often been put, “The rights of your fist end at the tip of my nose.”

With this as background, it might come as a surprise that there was one part of my upbringing as to which my mother was NOT liberal about; indeed, she was downright authoritarian.  And that was her requirement — with a few reasonable exceptions — that she, my brother and I all had to sit down and have dinner together every night, and in our very formal dining room.*  The breakfast room was strictly for breakfast (with an exception I’ll note below) or lunch.

My mother explained this rule, quite rationally, as am important opportunity both for participating in each other’s lives and for discussing current events and other issues outside of the family.  And I give her credit; it really worked that way.  While I wouldn’t say we exactly sat around the dinner table debating the finer points of Kierkegaard most evenings, the conversations were held on a pretty high level, especially as my brother and I got older and, concomitantly, more worldly.  My brother, in particular, added aptitudes in science and music that neither my mother nor I had. And, as other Retro-ists might have guessed, I’ve always been a “word guy,” and that’s where I could contribute.  In any event, our conversations were at least loftier than just “pass the damn potatoes, will ya” and “tell him to stop bugging me about my pimples.”  My brother and I loved these dinners, inconvenient as they could be sometimes.

That said, as my brother and I came to realize as we got older, my mother’s motivation here likely came not only from lofty ideals of child development, but from her own childhood experiences.  She was brought up in a very affluent family.  And this was in the 1920’s — decades before there were TV’s, let alone TV dinners to accompany them. As a result, until she was sixteen, she and her two younger brothers had to eat dinner early in the “nursery,” rather than later on in the dining room with her parents and any other adults who were there.  As can be imagined, as she got into her teens, she more and more resented this arrangement, especially as her brothers, who apparently spent most of their time figuring out ways to maim or otherwise torture each other, were hardly the most scintillating intellectual company.  So, once she finally graduated to the dining room with the adults, she embraced the opportunity, albeit probably as much to lord it over her bratty kid brothers as for the erudite conversation, and the seed was planted for passing it on.

In fact, I didn’t realize how unusual my mother’s dining room rule was until I noticed how many other families I knew mainly just did “catch as catch can” for their dinner times and locations.  I particularly recall when I was in college and my roomies and other pals would visit at our home and later tell me how much they enjoyed these long, chatty dinners — even beyond my mother’s terrific cooking skills — and how unlike their own families’ meals they were.

And, indeed, in a modified way (mainly on weekends, due to challenging work, travel, and business entertainment schedules), my former wife and I tried to do the same with our own brilliant and always fascinating daughters — at least when they weren’t figuring out ways to maim or otherwise torture each other.  They are both still single, so haven’t had a chance to pass on the tradition, but I need to ask them if their memories of these dinners are as fond as my own.

As enjoyable and enlightening as dinner in the dining room was when I was growing up, I should note two significant exceptions to the rule.  First, it only applied to dinner.  Indeed, when I was growing up, I was so nauseated by my mother smoking cigarettes as I tried to eat my cereal in the morning in the breakfast room, that at some point I just took my cereal — and a book or newspaper — into the dining room and ate in there.  And my mother was fine with that.  She understood and respected my desire to not be around her cigarette smoke, but she was damned if she would deny herself what I understand — and my current wife has confirmed — is the sublime pleasure of leisurely smoking and drinking one’s coffee in the morning.  (For the record, I hate coffee, too.)  I can’t remember what my brother did — my head was too buried in whatever I was reading — but assume he was equally excused from attendance.

Second, dinner of the whole family in the dining room was not always a felicitous affair.  I speak in particular of several Thansgiving dinners where my mother’s brothers (my uncles) would join us.  They were, of course, much more mature than they had been in the nursery growing up, but somehow — and, as I consider it, possibly due in some part to their disinterest in the adult conversations in the dining room even after they were allowed to eat there — their politics had not evolved very much.  I’m not sure if they would be Trumpians today, but they were pretty conservative, especially for educated Jews, and they would get into some fairly loud and ugly arguments with my mother and mock her for being the archtypical “limousine liberal” that, for better or worse, wasn’t too far from the truth.

Political arguments with crazy uncles at Thanksgiving dinners is almost a cliche. But, worse than their choices in politics were my uncles’ choices in wives.  Both seemed to be attracted to increasingly more unhinged women over the years.  Almost all of these women, it ultimately became clear, were very serious alcoholics.  As a result, by the time dinner rolled around, they had frequently been drinking for hours and were quite out of control.  In retrospect, their episodes of screaming at the dinner table, and sometimes having to be physically restrained (if they didn’t simply pass out), was a pretty good object lesson for both my brother and me as to the dangers of excessive drinking, and one which we both have remembered well and taken to heart.

These sad, temporary aunts certainly did little to enhance my memories of family dinners in our dining room.  Nonetheless, take it from this otherwise unreconstructed liberal: such dinners are still a wonderful thing to experience and impose upon one’s kids.

*       I am in awe of Betsy’s treasure trove of pictures from all aspects of her family’s life, and equally humbled by my own failings in this regard.  However, in thinking about some image to illustrate this story, I suddenly remembered the special section of the New Haven Register that my mother was in charge of for the New Haven Symphony;  I wrote about it in this recent story.  And, in particular, I remembered a captioned photo of my mother in our dining room with a couple of the executives of the company that had repaired the ceiling, as well as the matching floral wallpaper and drapes, after some pretty extensive water damage.  So, while I don’t have any photos of us sitting around the dinner table, at least I have this photo, which I’ve used as the featured image. (And my mother would have wanted me to mention that the wallpaper and drapes were from Scalamandre.)

12 Responses to Dining in the Dining Room