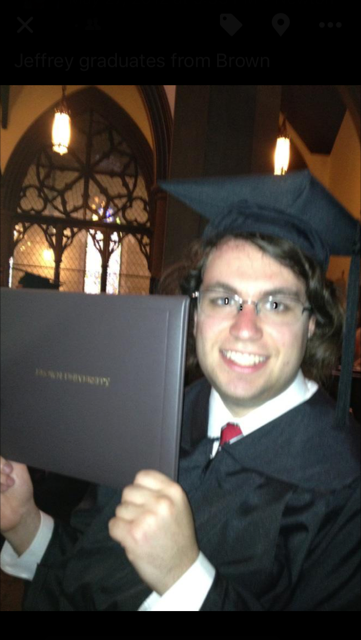 I have two children. David came out ten days late, with a full head of dark hair after a long, difficult labor. Jeffrey burst into the world on his due date in just four hours with blue eyes and blond curls. I used to joke that their personalities were set then and there. David overcame intense shyness to find his place in the world. He went to Stanford, got his PhD from Columbia in computational neuroscience and now works in London for Google DeepMind. Though my younger child’s story also has a good outcome, there were struggles along the way, and always will be.

We could vacuum under David’s crib and he wouldn’t awake from his nap. If I so much as cracked my knuckles while Jeffrey napped, it woke him. Though he smiled easily, it became apparent that he was very sensitive to the world around him and was easily distracted. At a very young age he displayed great gifts in building three dimensional objects and spatial relationships, but playing with others and sharing was not for him. He could throw a tantrum like no other. We called them melt-downs, were very disruptive and could go on forever. We began searching for answers and seeing a therapist when he was four.

The first diagnosis was ADHD and the long experiment with pharmaceuticals began. I think the poor kid tried everything throughout the years. I kept a record of everything as the diagnoses also grew. His teachers put up with him because it was so obvious that he was so bright. When he entered public school, I began volunteering in his classroom several days a week, so I could keep close tabs on him. He had a difficult time making decisions (what topic to write about, what book to read, etc). He was very rigid.

His behavior in second grade grew quite provocative and we requested an evaluation. The school psychologist told me privately before the whole team was assembled that there was nothing wrong with Jeffrey, he was just lazy, and too smart for his own good. I could have bashed her. He had brought the entire class to a standstill for an hour because he couldn’t find his eraser. I later found it when I washed his pants. It was in his pocket. Yet he could figure out n factorial to the 11th place in his head (I confess, I don’t even know what that is). The school principal told me Jeffrey would be OK because I hadn’t given up on him. I was astounded. That thought was beyond me.

We thought he might do better in fourth grade, since he had a male teacher, who used a computer a lot. Jeffrey loved being on computers and was already teaching himself to program. But the curriculum was becoming more language-based, which proved more challenging. He couldn’t infer and again, making choices, even what word to use, would paralyze him. But one topic inspired him. They were studying light refraction and told to pick one of their vocabulary words and write an acrostic poem, that is; the word is spelled going down the left-hand margin. He was nine years old. He chose the word PRISM. This is what he wrote:

Precious and small are the

Shatter it and beware. Do not tamper with the

Magic of a rainbow.

I was blown away. I put it in my Christmas card letter that year. I still carry it in my wallet, all these years later. It became my talisman. I figured any child who could put that together would be alright. We just had to find the right environment to let him flourish. He was diagnosed with Asperger’s syndrome, a high-functioning autism, the next year. This got him on an ed-plan at school and got him an aide, but we found these people, though well-intentioned, were little more than baby-sitters and ill-prepared for the challenges that Jeffrey presented.

We kept tinkering with his medications and seeking to explain the huge temper tantrums. Work being done at Mass General led us to a diagnosis in 7th grade of Child On-set Bipolar Disorder. By this point, he was barely going to school. I couldn’t get him out of bed and he would sit in the special-ed room all day, doing nothing. Though we now dispute that diagnosis (he does suffer from depression, but is not bipolar), our public school system agreed that they could not educate him and paid for him to attend a special education school 18 miles away and he could go on a van they provided.

He attended a quirky small school, which caters to kids like Jeffrey from 8th – 12th grade. They spend all of January putting on a major musical and all the kids have to be in it. They learn to be someone else, explore emotions on-stage, learn to trust others. As a theater major, I get what they were trying to achieve. They also emphasize writing and the kids were given writing homework every weekend. Jeffrey went on two trips to Europe with the school, which numbered 52 students across all the grades. They learned to take public transportation to attend plays in Boston and Cambridge and had to eat at restaurants before the plays, with teachers out of sight, but close enough in the event of an emergency. They learned life skills. The school was weak in science, so we hired outside tutors for that piece of the curriculum, but it was clear to our child that he was in a safe, loving environment.

He got into Brown, early decision, even with his quirky academic record. He had some accommodations (Brown was much better at this than our public school system), graduated with a 3.72 average in 4 1/2 years and went to work for Apple after college, living on his own in California, where he remains. 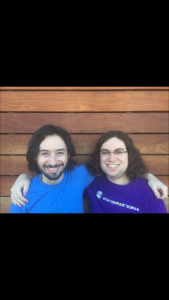 I stated that Jeffrey was a work in progress and so he was. Let me update the story. I wrote a story almost two years ago entitled “Vi-improved”. The link is here: Vi-improved. I explain that Jeffrey, who had left Apple to work for a computer security consulting company called NCC, had gender dysphoria and transitioned to Vicki. Things didn’t work out at NCC for a variety of reasons and she was unemployed for many months. It was a stressful time for her.

In June, 2017, her brother, who works for DeepMind, the leading AI company in the world (but is in London), reached out to people he knew at OpenAI, a small, non-profit company, funded by many tech billionaires in San Francisco. They didn’t have an opening, but did have a problem that they were willing to let Vicki work on. They set it up as a three week project for a nice sum of money. She solved the problem in two days. The company uses gaming software to test their AI problems. Vicki is brilliant at that work. She was hired full-time in August, 2107. She has been in a serious relationship for 2 1/2 years. They moved in together last March. She feels valued at work, though it is a long commute.

Now her partner is in a life crises and she is being very supportive, so life is, once again, a roller coaster. We are as supportive as necessary. We like her partner, are thrilled she has a wonderful job. We just want her to be happy. Stay tuned…the story continues. 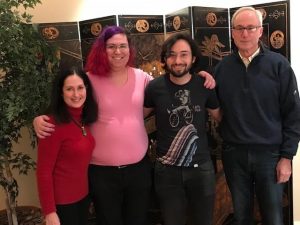 17 Responses to Have (More) Faith