Kids’ Cartoons: The Real Stars of the Shows by John Shutkin
100
(137 Stories) 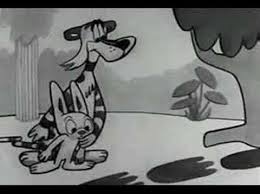 Deep rumination about this week’s prompt — and, yeah, a bit of tactful noodging by the Retro Admin to put my storehouse of childhood trivia knowledge to even greater use — has compelled me to write another story on the kids’ cartoons of our youth.

I don’t think what I have to say here is all that earth-shattering.  Indeed, I can well imagine, were I to turn it into a paper or exam for some undergraduate pop culture course, getting back a professorial comment to the effect of, “Mr. Shutkin, you have an astounding command of the obvious.”*  But here it goes: the “heroes” were the least interesting characters in the cartoon shows. The far more interesting characters were their weird sidekicks and the villains. Let me give some examples.

Typically, the heroes were these bland forces of rectitude. Crusader Rabbit is Exhibit A.  Far more interesting was his goofy, cowardly sidekick, Rags the Tiger (featured image).  And, later, as I noted in my prior story, Crusader and Rags were virtually cloned as Rocky and Bullwinkle:

Indeed, I think it is telling that the re-boot of the latter show was simply called “The Bullwinkle Show;” as the creators had figured out whom everybody really wanted to watch. And in Peabody’s Improbable History (originally a segment on the Rocky and Bullwinkle Show), all pretense of a dog as a kid’s loyal sidekick is abandoned; the dog (Mr. Peabody) is clearly the star of the show and the “pet” kid (Sherman) is just his bland foil. 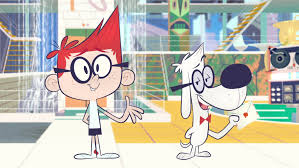 And it is not just the goofy sidekicks who were more interesting; so were the villains. Boris and Natasha are unforgettably delightful bad guys and a whole lot more interesting to watch and listen to than some stupid flying squirrel named Rocky.  Similarly, who is more fun to watch: some insipid bird (Road Runner) who just beep-beeps and runs like crazy or the perpetually scheming Wile E. Coyote, whose nefarious plans always — and literally —  blow up in his face? (Thanks, Acme.)

And much of what is said about Road Runner and Wile E. Coyote could be said about Tweety Bird and Sylvester, respectively (again; nearly clones).

Sticking with the great Warner Brothers cartoon factory, but switching to the contra-positive, the only interesting stars are themselves little stinkers.  I think, of course, of Bugs Bunny and Daffy Duck.

And then we come to the Disney monolith.  Just try naming one interesting thing about Mickey Mouse other than his ears. Gimme crazy, irascible Donald Duck every time if you want me to keep watching. (Honorable mentions go to Uncle Scrooge and Goofy.)

Other examples abound, but I’m trying to fit this whole thing into one blue book, OK?  So, having established, at least to my own satisfaction, that my premise is correct, now let me explain why it is so. And I believe there are two reasons for it.

First, cartoonists have always been a famously subversive lot — and not just those who become political cartoonists or who wrote for Mad Magazine or, later, underground comics (R. Crumb, et al.).  Even at Disney, the straightest of the straight, it turns out that the cartoonists were inserting pornographic images — very briefly — into the cartoons.  So you had a bunch of very talented goofballs caught up in a studio system and not wanting to just churn out squeaky clean Horatio Alger stories.

Second, the point I am making here is not simply limited to cartoons, but, indeed, to all storytelling and acting.  How many actors have made clear that they always prefer to play the villains or the quirky sidekicks to the square-jawed heroes?  (That’s also what tends to win the Oscars.)  And the same is true in the semi-related genre of comic books.  Despite some interesting backstories, Superman and Batman are a yawn.  It’s the villains — the Lex Luthers and the Penguins and the Jokers — who really steal the show.

OK kids, convinced?  Now just gimme an easy A for this dumb course and let me worry about my organic chemistry lab…..

* Fun fact: one of my law school classmates actually received back such a comment from our tax professor.

13 Responses to Kids’ Cartoons: The Real Stars of the Shows

Winky Dink and Me
by Suzy