Prompted By Do You Believe in Magic?
Be the first to comment! 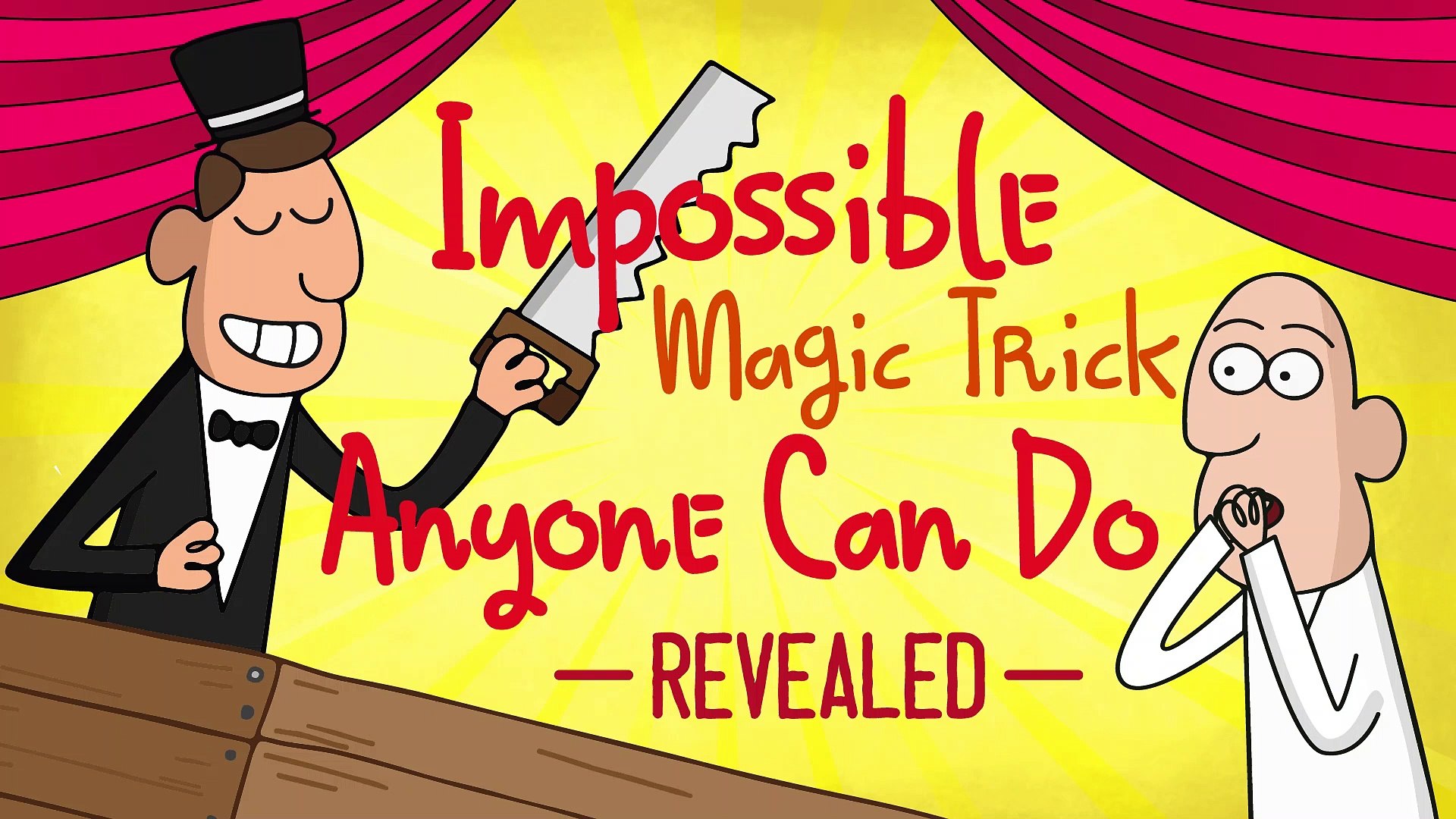 Having always been a fairly hard-headed realist, even as a kid, I never believed in magic.  Nor did my parents, so no one ever tried to convince me that it was “real.”  (I am sure that they would be as miserable as I am in this Trumpian “post-truth” world we are now forced to inhabit.)  Indeed, my main memory of magic as a kid was my parents giving me a set of magic tricks and gadgets for my birthday and my father explaining, in so many words, “That’s why they call them ‘tricks,’ son.”

Though I admit to having been dazzled over the years by such amazing magicians as Penn and Teller and Ricky Jay, I have equally appreciated that, like my father, those particular magicians always made a point of stressing that what they did was absolutely not magic, though often brilliant craftsmanship.  And practice, practice, practice.

So, at first, I was tempted to not write any story on this prompt as a brilliant performative statement (OK, non-statement) that magic was nothing but nonsense.  However, I very quickly realized that doing so would be viewed by others on Retro as me just being a lazy-ass this week.  And rightly so.

So then I thought I would simply dash off one of my quick, semi-witty pieces of RetroFlash doggerel.  But the only word I could think of that rhymes with “magic” was “tragic,” and that doesn’t really fit with my dismissive attitude towards the subject.  Plus, I also realized that, even with my own (near-magical) writing abilities, I probably couldn’t fit all I had to say about the magic set in only — and exactly —  one hundred words.

So let me just briefly, albeit in a few hundred words, share a couple of tricks I’ve remember from that magic set.  Along with how they work — and, again, it ain’t magic.

First of all, there was the coin disappearing box. Rather than trying to explain it, here is a quick demonstration of it working:

The next trick I remember is the magic disappearing box.  The video I found of the trick shows silk scarves and other objects being pulled out of an apparently empty box:

When I did the trick as a kid, I was taught to do the opposite — i.e., close the front of an empty box and then put objects into the top of it in view of of the audience and then open the front of the box and show it was still empty.  However, the trick is still the same. The box has two mirrors in it at right angles placed between the middle of the back wall and the two front corners.  Due to the symmetrical reflections, the mirrors give the impression of an empty cubic space.  However, there are actually two triangular compartments behind the mirrors where objects can be placed or removed from the top without being seen from the front of the box.  Voila!

And now, for my final trick…..  Actually, despite a number of other tricks in the magic set that I remember, let me instead demonstrate a sleight-of-hand trick that I learned from a family friend when I was a kid: how to “take off” my finger.  And, in order to do so, I have asked for the help of my beautiful, able assistant (i.e., my wife) since, as talented as I am, I can’t do the trick and take a picture of it at the same time.

The first part of the trick is to bend the index finger on one hand down while keeping the rest of the fingers on that hand straight: 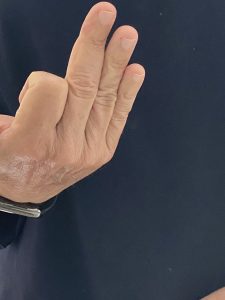 At least for me as a kid, this took a lot of practice; my other fingers wanted to curl.  But, after some practice, I got it right and since then I’ve always been able to do it easily.

Next, bend and place the thumb from your other hand on top of the bent index finger, like so: 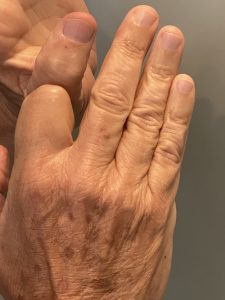 Then place the index finger of your thumb hand across the gap between your other (bent) index finger and your (bent) thumb: 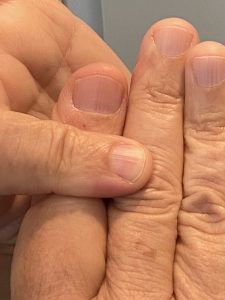 Once you have all this is place, you turn to your audience and present your hand arrangement to them, knuckles forward, and announce, “Watch me take my index finger off.”  Then you slide the bended thumb a bit upward to show the apparent separation in your index finger (actually, the separation of your thumb from the index finger).   Whether this is done quickly or slowly — possibly embellished with appropriate moans to suggest the actual rendering of flesh — is entirely up to the performer and his/her choice of histrionics. Here is what it should look like: 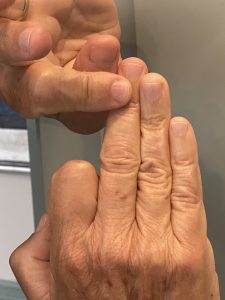 One final observation.  I have learned over the years that the illusion is actually more effective with a child’s hands. It turns out that one’s thumb — to say nothing of other, more publicized body parts — grows somewhat disproportionately at puberty.  So, pre-puberty, the top of the thumb more closely matches the bottom of the index finger.  Who knew?  Anyhow, all the more reason to teach this trick to your grandchildren.

That is my one and only sleight-of-hand magic trick.  But it still dazzles small children and can even be a laff riot at an adult party — not that anyone has gone to one of those in the last two years.

Finally, a spolier alert.  No actual fingers are removed in the performance of this trick.  Magic, shmagic!

The Inexplicable Magic of The Gates
by Dana Susan Lehrman

“Do you believe in fairies?”
by Dana Susan Lehrman

Penn and Teller after “Death”
by Marian

This Magic Moment
by Suzy

Pick a Card
by Laurie Levy