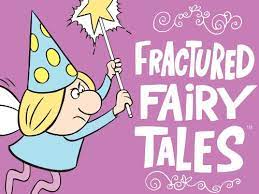 To respond to this prompt, I asked myself what was my favorite book to read as a kid and what was my favorite book to read to my daughters.  And quickly came up with the answer to both.  “And to Think That I Saw It On Mulberry Street” for the former and “The Lion, the Witch and the Wardrobe” for the latter.  No question about either.  But then I also realized that, in different ways, my current perspective of both books has significantly changed.  Let me share my thinking on these books briefly below.

I wrote about “Mulberry Street”  in a RetroFlash just a few months ago, setting forth my current discomfort with it.  Since it’s (obviously) short, here it is again:

When I read as a kid

I loved most Dr. Seuss.

They just set me loose.

And his pictures – oh my!

They so captured his rhymes.

As I met these new creatures

Just so many times.

And my favorite by far

And all that Marco had seen

I would often repeat.

But times they do change

And we must as well.

That which was fine as a kid

May be offensive as hell.

And so in the case

Of the “Chinaman” there,

What was just funny then

And here again is the book’s cover and the offensive image of the “Chinaman” in it: 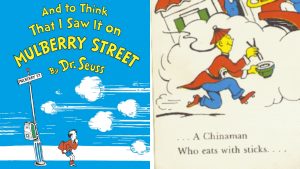 Moreover, it turns out that Dr. Seuss’s anti-Asian racism was not limited to “Mulberry Street.”   And this was so even though he had very enlightened views as to anti-Semitism and other forms of prejudice. This odd conundrum is addressed in this linked article.  So, it is difficult to ascribe his bigotry simply to the widespread anti-Japanese sentiment in the US in the 1940’s and 1950’s; it transcended that.  And yet, Dr. Seuss and his books were still wonderful beacons in so many other ways. So its very tough to reconcile all of these contradictions.

As to “The Lion…,” here is its original cover: 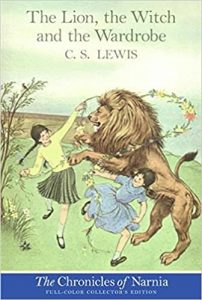 I loved reading this book (and its sequels) to my daughters.  And, though I knew that C.S. Lewis, its author, was a lay Christian theologian, I always blithely assumed  that “The Lion….” was just a cool fairy tale adventure mainly about three young siblings who discovered that the back of a  bedroom wardrobe opened into a mystically kingdom ruled by a benevolent lion named Aslan.  In the course of the story, Aslan is killed, but then comes magically back to life —  which was not something unheard of for heroes in fairy tales.  Thus, the possibility that Aslan might be a symbolic Jesus figure and his story a re-telling of the Resurrection of Christ never occured to me, and I certainly never suggested anything of the sort to my girls.

But about four years ago, I was listening to the comedian Gary Gulman on satellite radio and, in this routine, he pointed out my incredible theological myopia:

The most obvious Christ figure
in the history of literature.

I called it in fifth grade,
and I’m a Jew.

When we got to the part
in The Lion, Witch, Wardrobe

and the kids were weeping.

They were so distraught.

If this goes
where I think it’s going,

he’ll be back on Sunday.”

The light finally went on for slow group moi.  So, the next time I saw my daughters (now in their 30’s), I asked them if they ever knew who Aslan was supposed to be.  To which they replied, in effect, “Well, we figured it out a few years after you read it to us and always wondered why our nominally Jewish/agnostic father chose to read us a Christian allegory and then never even explained it to us.”  I had to admit to them — and not for the first time —  that I had simply been clueless.

But that got me wondering if I would have chosen to read this story to my daughters if I did know its underlying meaning at the time.  And the answer is that I just don’t know.  I am not a Christian and don’t have much patience for “miracles” –what I consider to be the inexplicable magic in any religion — and I view the Resurrection as just such magic. On the other hand, “The Lion….” is still a really good story and I certainly have no problem with a benevolent protagonist like Aslan.  And the fact that he comes back to life and everyone is happy — including my children when I read it to them —  makes it a particularly nice story for young children who can often be so afraid of death.  So, as with “Mulberry Street,”  I just dunno….

In considering this question further when writing this story, I concluded that the best test of both “Mulberry Street” and “The Lion…” was whether I would want  my grandchildren to read or have them read to them.  And, in turn, an important component of this test would be to seek my daughters’ views as well, since we’re obviously talking about their kids here.  But, as much as I was tempted to ask them, I resisted the impulse.  They are both still unmarried and childless.  And I knew with near-absolute certainty that any such question would be viewed by them as simply a pretext by their Jewish motherly father to pry into the very delicate question of whether they ever planned to have children.  (I may be clueless as to New Testament subtexts, but I am not a complete idiot.)  As a result, much as I would have liked to, I’ve not asked my daughters about this.

But I nonetheless do have at least one takeaway from this whole exercise in revisiting early childhood stories. Simply put, and as with so many other things, it’s complicated.  Conversely, I know that there are very few people or things to whom I can give my unconditional love.  Most importantly, my two daughters.  And probably salted caramel ice cream.  As to children’s stories, as per my featured image, I think I’ll just play it safe here and go with the delightfully subversive “Fractured Fairy Tales” turned out by those geniuses who also created “Rocky and Bullwinkle.“

17 Responses to My Favorite Children’s Books — In Retrospect