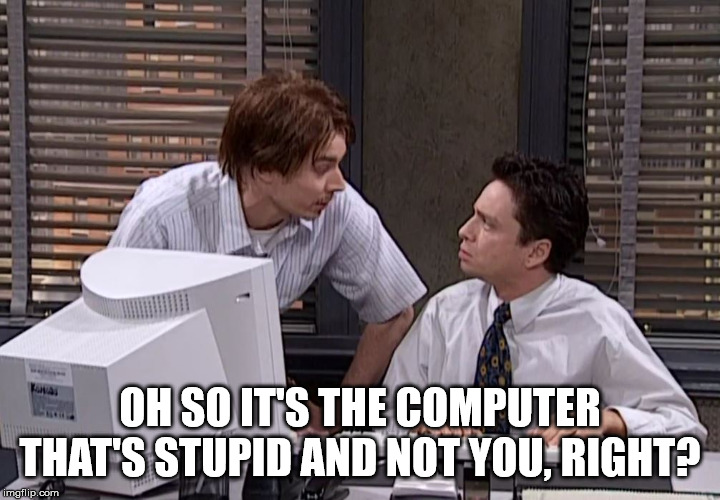 There are two independent threads that intersect for me in response to this prompt. The first thread is my own skill, or lack thereof, as a techie. As I’ve noted in previous stories — not worth linking to — I’ve never learned to properly touch type.  Indeed, the ever-patient Retro administrator can testify to my ongoing proclivity for typos, despite my better efforts otherwise.  But I am not a Luddite. I appreciate and embrace technology and always was quite adept at the STEM skills even though my academic interests lay elsewhere. Plus, I am by nature a problem solver. To put it metaphorically, if things suddenly go black, I want to light a candle — or, more literally, change the batteries or re-set the fuse  — rather than simply curse the darkness.

Two independent threads intersect for me here: my own skill, or lack thereof, as a techie, and Saturday Night Live sketches.

The second thread is Saturday Night Live sketches.  There have been literally thousands of them over the years, and they have ranged in quality from egregious one-offs, which make one wonder what sketches were rejected that week, to hugely popular ones that ended up being spun off into their own movies, albeit of varying success.*  But the ones that most resonated with me, at least professionally, were fairly occasional ones featuring Jimmy Fallon playing Nick Burns, “Your Company’s Computer Guy.”  As the jingle that accompanied these sketches went,  “Nick Burns, the computer guy.  He’ll fix your computer, then he’s going to make fun of you.”

For those unfamiliar with the oeuvre, here’s a representative example:

In brief, Nick Burns is the archetypical computer guy.  He is geeky beyond geeky and yet, in the environment of a large company’s dependent on computers but populated by personnel largely computer-ignorant or, worse yet, hysterically techo-phobic, he is a superhero.  Though not a humble one at all.  He is snarky, officious and occasionally sadistic. He lords his mastery over all those executives who make ten times what he makes and yet can do nothing but pathetically beg for his help and obsequiously thank him for even his most minimal efforts.

Now the thready intersection. One of the best lessons I learned early on in my legal career — a lesson definitely not taught in law school — was to treat the support staff nicely.  You did that for two reasons.  First, and most importantly, you should be a decent human being.  But second, even if you are not a decent human being, from a pragmatic standpoint, these are people whom you will need to help you at some points in your career, and sometimes desperately so.  And woe be to the executive who has treated a techie like a jerk.  Not only won’t the executive get the help he needs, he may well be sabotaged (though often without even realizing it).

In my last position as a general counsel, we had a techie assigned to us senior executives in HQ named Dave.  Dave was a classic Nick Burns, right down to the pocket protector, big collared 70’s shirts and the usually snarky air of superiority.  But when your computer crashed, you had no choice: better call Dave.  Over time, however, and in light of the lesson noted in the previous paragraph, I actually got to be pretty friendly with Dave.  I think he appreciated my pleasant, egalitarian demeanor and realized that at least I was trying to work things out myself and did have some modicum of technical competence.

Dave even confided in me at one point two techie in-jokes about computer problems.  Per Dave, when techies were together, they would speak in terms of such and such a problem being a “PIC/NIC.”  This was a pseudo-technical acronym for “problem in chair, not in computer.”  In other words, the guy they were helping was a moron.  Similarly, they would speak of problems being of the “ID ten T” sort.   Convert the ten into numerals and you will get it.  I liked to think that Dave would not have shared this techie lingo with me if he thought I was like the seated guy in the Nick Burns sketch that is the featured image.

Modern businesses being what they are, the Powers That Be at my firm ultimately decided that we executives didn’t need our own dedicated (at least in one sense of the word) techie, so Dave was laid off.  We were then thrown to the mercy of the off-site IT department that, rather than making house calls, would either try to talk you off the ledge via speaker phone or, in particularly desperate situations, “remote” into your computer and try to fix the problem as you helplessly watched an alien cursor move madly around your screen   — a truly terrifying, 1984-ish experience. Happily, but not surprisingly, Dave had already landed a much better paying job elsewhere even before I was able to drop by his office to offer my condolences and thanks.  But, when I did, he did appreciate the fact that I had done so..

Now that I’m retired, I don’t even have an off-site IT department to call on (other than the Geek Squad at Best Buy).  Fortunately, I have learned that an awful lot of fixes can be found either within my computer’s programs themselves — just look for a “Help” tab —  or by simply googling whatever my question is.  Almost invariably, thousands of other users have had the very same problem.  And often, once the problem is solved, I realize that it was a PIC/NIC.

*On the success side, think of  “The Blues Brothers” and the “Wayne’s World” movies. On the stinker side, think of “Stuart Saves His Family” and “It’s Pat.”  Somewhere in the middle is “Coneheads.”