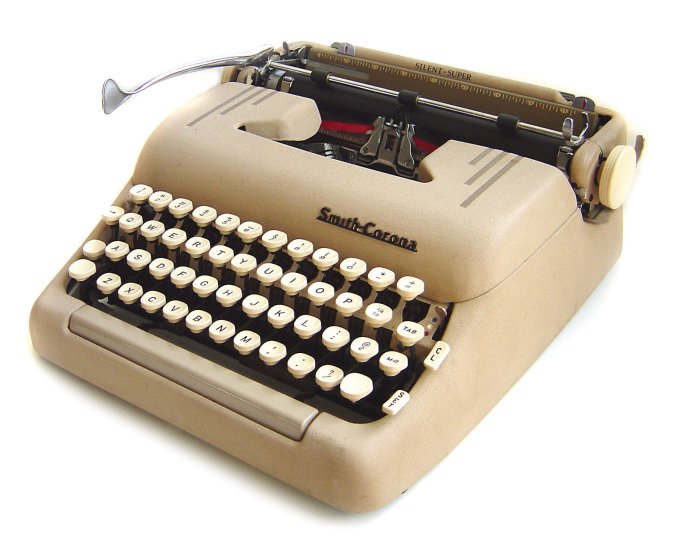 "...if I were still chained to a typewriter, not only would I not be writing this story (duh), I probably wouldn't be writing any damn stories at all."

Typewriters.  OK, so Tom Hanks is so obsessed with typewriters he collects them and writes a book about them.  As a fellow boomer, obviously also steeped in retro stuff (ergo my Retro stories), I, too, am supposed to love them.  I say nay, nay.

As I have indicated previously, I never learned to touch type.  That slows me down a bit, but my hunt-and-peck style is fairly efficient.  Rather, the whole process from end to end used to drive me nuts.  Anyone else have trouble just feeding the sheet in straight?  And then fiddling with it hopelessly to get it straight? Sort of like sawing off the legs of a table to keep it from rocking.  And knowing where to begin and end each page so they are all consistent?  Carbon copies were no walk in the park either, and usually involved smudges and not just post-operative hand wringing, but hand washing.   And, worst of all, corrections.  Erasers, White Out, that white tape-y stuff on a reel that always got tangled.  I swear, the greatest academic moment of my college career was when the Anthropology Department decreed that theses could be submitted on corrasable bond.  And, as a baby lawyer, I recall that decisions about whether or not to make last-minute edits in  briefs — particularly on the early pages, which would have a cascading effect on the rest of the document —  often had a substantive impact.  Try explaining that to a client — or, worse yet, a senior partner — after pulling an all-nighter.

Perhaps most importantly, if I were still chained to a typewriter, not only would I not be writing this story (duh), I probably wouldn’t be writing any damn stories at all.

8 Responses to Not My Type