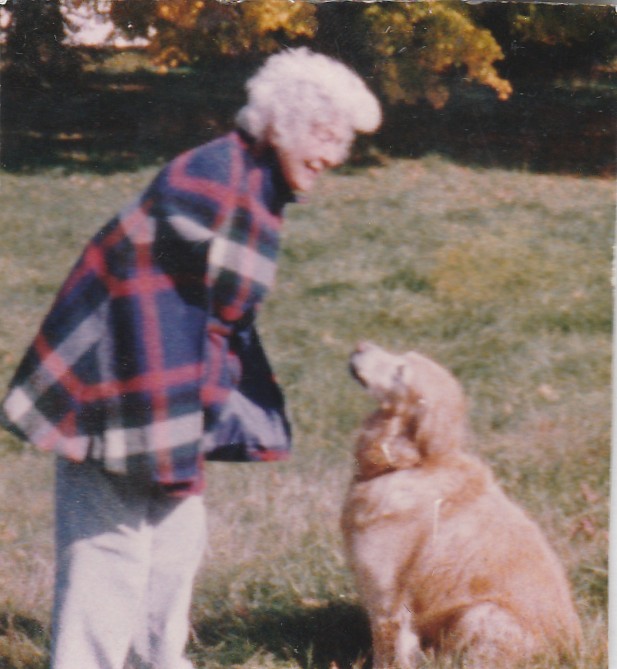 When we are children, our pets are like siblings. When we grow up, they are the children. The love remains the same.

Wouldn't it be nice to hear them again?

I’ve jotted down stories of our family pets—three dogs and two cats from our childhood and adulthood—more for myself than for anyone else. But you are welcome to read on if you wish.

The cats were mine.

Cat #1 was orange and named, predictably, Rusty. She was a perfect little girl for a little girl, gentle and content to hang around the house. Like Mary’s lamb she followed me to the school bus stop every day. One day the bus ran over her. My school’s principal, Mr. Blaney, let me cry it out in his office all morning. It was quite traumatic for a seven-year-old; I’ve had a soft spot in my heart for redheads ever since.

Cat #2 was of another sort entirely. Sleek, black, panther-like, Midnight treated our home like a hostel, eating breakfast and then disappearing outdoors for the entire day and night. At dawn he would reappear at my bedroom window like Dracula, having clawed his way up an enormous tree and leapt, squirrel-like, onto our porch’s flat roof, mewing his order to open up now. A weird (potentially litigious) neighbor who stocked trout in his luxe backyard pool/pond accused Midnight of poaching his fish. Midnight was a wiseguy. We threw ourselves on the mercy of the Court.

One time Midnight was gone for two days. When my toughie returned he was whimpering. A scary infection protruded from his chest, a part of his ear was gone.  What kind of crazy fight night had produced this? You would think he would have learned his lesson, but no. A short time later he didn’t show up at my window. Another day passed, then another. Slowly it dawned on me he wouldn’t be coming home. I have to admit, it had been hard to love a bad boy determined to do it his way.

Oh, the scent of Alpo in the morning! Skippy, Dog #1, was a shepherd collie we got from a neighbor’s litter of puppies. He was my brother’s dog, and as a pup he would walk alongside 11-year-old Jon on his paper route. One dark winter afternoon a car swerved in the snow and hit Skip. My brother gently lifted up his injured dog, finished delivering the newspapers, and carried him home. I swear the two of them looked like the Boys Town logo, He’s not heavy, he’s my brother. Miraculously the little one survived.

When he was bigger Skippy had a second encounter with a speeding car. This time he suffered a fractured leg and internal injuries. Wiser men would have thrown in the towel then, but our kind-hearted parents agreed to let our veterinarian work to save him. By Christmas Skip was hobbling around happily, his hind leg in a full-length cast. Even happier was our vet, who had performed the first splenectomy (removal of the spleen) on a dog. Our own Skippy was immortalized in a veterinary journal.

Skippy was nearing old age when we moved a mile away to another house. We were so engrossed in unpacking boxes we hadn’t noticed he was gone. My brother had a hunch. He drove back to the house we had just vacated. There was his buddy, sitting sentinel near the front door as was his custom. He had been waiting for us to come home.

One rainy night we lost him, age 14, to the third and deadliest car. We “kids” lived far away. Each of us mourned our dog brother in our own way. I salute him here.

Is there anything more delightful than a golden retriever? They take three years or so to calm down, but after that everything they do and are is magical. Dogs #2 and #3 embodied a Golden’s best traits. They were our mother’s “retirement dogs.”

Like Skippy, Polly, Dog # 2, lived long and well. Her time on earth was golden in every way, her bond with our mother (above) exquisite to see. As it turned out, Polly had love enough for all of us.

One night at a family party I excused myself with a migraine and retreated to a room upstairs. I lay down on the bed in the dark, my eyes firmly shut and feeling as if pierced by ice picks.

There came a familiar clicking sound on the wood stairs. Moments later a canine nose nudged open the door, allowing the tiniest sliver of light. Polly came over beside the bed and sat, her muzzle  up close and level with my face. She locked her brown eyes on my blues and held the gaze. I was unnerved but touched, so very touched. I mumbled thank you through my pain. After a while Nurse Polly pulled herself up and rejoined the humans downstairs.

At age 14 the time came for Polly to be put down. The vet kindly came to the house and Polly drifted away in our arms.

Following Polly’s loss our mother’s heart ached for another dog, and so Penny, Golden #2 and Dog #3, came to live with her. A mistake. Penny, though lovely, was much too strong and active for an 80-year-old woman to handle.

And then there was Penny’s curious daily habit. Around age one she began wolfing her breakfast and taking off immediately, disappearing down the hill. This went on for some time.

One day a neighbor from down the street called me and said, “Penny is spending most of the day with the little boy across from us. Would your mother be willing to give her up?” Are you saying that Penny is having an affair? I joked. It was the best thing for everyone. Penny needed a boy, and the boy needed a dog—this dog.

One day on a visit I looked out the kitchen window and saw Penny making her way slowly up the driveway. We hadn’t seen her for at least five years.

There was no bark; I opened the back door and in she came. She walked right past me and proceeded to the bottom of the stairs. After a pause I heard her climbing up to the landing.

There was a warm reunion going on in the room above me, and a short while later the sound of Penny coming back down. She walked past me again to the back door. I opened it for her. She retraced her steps down the driveway, as in a dream.

Our mother passed away a little less than two months later.

They say our pets wait for us in Heaven. I think this must be true. Why else would they, how could they dare to call it Heaven?