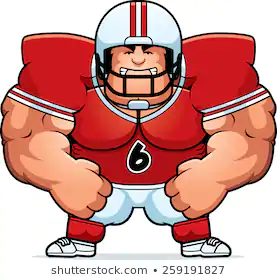 I pretty much knew I wanted to be a lawyer from early on. Jewish kids from professional families were supposed to become professionals themselves, right? And I was enamored with tales of Clarence Darrow and Atticus Finch.  Plus, my father, the doctor, hadn’t done much to make me want to become one myself.  (“Don’t be a doctor, son.”  “Why, Dad?” “Too much paperwork.”)

I knew enough about the process to know that, unlike pre-med, there was really no such thing as "pre-law."  In fact, I was amused that the only guys who seemed to label themselves as being "pre-law" were these huge college football players introducing themselves before games on TV. (See illustration in Featured Image.)  I was pretty sure that these guys were more likely to end up as members of the NFL than the ABA.

So, entering college, I just assumed my next step would be law school and then a law career itself.  Plus I knew enough about the process to know that, unlike pre-med, there was really no such thing as “pre-law.”  In fact, I was amused that the only guys who seemed to label themselves as being “pre-law” were these huge college football players introducing themselves before games on TV. (See illustration in Featured Image.)  I was pretty sure that these guys were more likely to end up as members of the NFL than the ABA.

Therefore, in choosing my major — or “concentration” as we elitists at Harvard called it (I guess they couldn’t come up with a Latin term) — I was pretty much free to do what I wanted to do.  And I knew that even the concentrations that have some relationship to the law, like economics, English or political science (again, we called it “government”), were not particularly important prerequisites; just a good liberal arts education concentration would do.

We were required to first declare our concentration before the end of freshman year — a ridiculously early time, but saved by the ease of switching concentrations later on and the relatively unburdensome course requirements for most concentrations — so I chose Latin.  I had taken a lot of it in high school and had enjoyed the class I was taking my freshman year.  However, while taking the Latin final that spring, one of the other students in the class fell asleep.  As a terrified freshman, I was convinced that, if I tried to wake him, I would be accused of cheating and thrown out of school and my life ruined, so I did nothing.  Fortunately, one of the proctors also saw — or maybe heard — the student and woke him.  But at that moment it dawned on me that, yeah, this was a pretty boring subject.

That summer, I was casually talking to friends about majors/concentrations and one suggested, seemingly out of nowhere, that I choose anthropology.  I thought about it and decided that it sounded just about right for me.  In particular, I had always pictured a spectrum of concentrations ranging from the softest of sciences on one end — psychology, sociology, etc. — to the hardest of sciences on the other — biology, chemistry, etc.  And it seemed to me that anthropology sat somewhere nicely in the middle: neither on the “pure bullshit” nor the “total nerd” end of the spectrum.  Voila!

And, though I never harbored any thoughts of pursuing a career in anthropology (or anything but the law), I found it to be exactly this nice balance and I truly enjoyed it.  I even enjoyed poring through the mammoth ethnographies of exotic and obscure (to me, anyway) cultures. Amusingly, years after I graduated, a friend asked me if I knew the “trick” about reading these  ethnographies.  I was clueless.  He explained that, as mammoth as they were, they were almost always structured so that the first sentence in every paragraph was the conclusion (e.g., “The Tikopea are a highly patriarchal society, and women with economic wherewithal are frequently accused of witchcraft in an effort to marginalize their power.”) and the rest of the paragraph is simply the empirical data supporting that conclusion.  As such, you really only had to read that first sentence to understand the book.  Amazed, I pulled down a few of my ethnographies and leafed through them.  Sure enough, unconscious as I was of this “trick,” in almost all instances the only sentence I had highlighted in a paragraph was the first.  I then thought of all the extra hours I could have spent with sex, drugs and rock and roll in college had I only known the “trick” at the time.  Ah, well….

In any event, I have happily — or mostly happily — had a legal career for many years.  In fact, as I write this, I  am off to my 45th law school reunion in a couple of days. And no regrets about either concentrating in anthropology or not pursuing a career in it.  Ironically, however, my former wife, though she also started her career as a lawyer (we met in law school), eventually became — and still is — the President of the American Museum of Natural History.  As a result, I was often included in gatherings with the many anthropologists at the Museum and thoroughly enjoyed that immersion.  A happy reminder of a happy major.

Becoming a Journalist — Lightning Rod or Seismograph?
by Edward Guthmann
My Career Matched My Major
by joelowry