Prompted By The Crush
23 comments. When I think of crushes, and their implicit unattainability, I always think of the adage about dogs who chase cars. But what would they do if they ever caught a car?  Well, though the metaphor may be less than exact, I caught the proverbial car.

When I think of crushes, and their implicit unattainability, I always think of the adage about dogs who chase cars. But what would they do if they ever caught a car?

In junior high school, I had a mad crush on a classmate — a girl I will call Kathie.  She was petite and cute and funny and, of course, unattainable.  I mean, we knew each other and were friends — she even took tennis lessons from my mother — but, as they say, just friends.

Of course, I did all the stupid things a junior high school kid would do in pursuit of the unattainable.  I memorized Kathie’s course schedule and knew when we were likely to pass each other between classes, so I could nonchalantly utter a cool “Hi yuh, Kath” in the hall.  And I made her a Valentine card by hand — a drawing of her home (I had been there once for a pool party) with a line of guys outside the front door and the caption: “I would have delivered this in person… but I hate waiting in long lines.”  Cooly self-deprecating, right?  And somehow I lost/threw the card out before sending it and had to stay up half the next night re-drawing it.

All for naught, of course.  I mean, Kathie liked me, but she was dating older boys at prep school already. And, once we were in high school, she was dating Yalies (including her future first husband). I didn’t moon, and had a normal high school social life and a girlfriend or two of my own, but Kathie still took my breath away every time I saw her or chatted with her.  (I annex as the feature image a photo of Kathie in high school.  I wasn’t crazy, was I?)

Kathie wrote a very sweet note next to her picture in my yearbook, saying “You must be about the most outstanding boy in our class,” but, far more importantly, also saying her main memory of me was giving her the Valentine card I had made in eighth grade.  (Melt!)

And my crush was hardly a secret.  One of my best buddies, Artie, an editor of the yearbook, made sure to post a photo of us and a few of our guy pals doing an impromptu can-can right next to Kathie’s yearbook photo; see below.  (I’m second from the left; that’s Artie’s nice note to the right.) 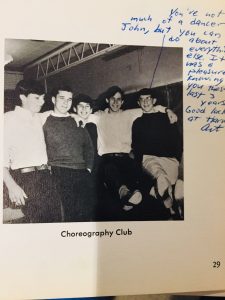 Fast forward twenty five years to — duh — our 25th class reunion. Kathie is there, still wonderful and beautiful and now unmarried, but I am very much married.  We do have a nice chat (under my wife’s watchful eye) and discover that we are now both lawyers, but that’s all there is to it.

Fast forward again about nine more years.  From out of the blue, Kathie contacts me, albeit strictly on the up-and-up.  She is practicing law in Connecticut but looking to switch firms and, knowing I’m a lawyer, is networking to see if I know of any good legal headhunters. Bad news/good news ensues. My efforts to help Kathie professionally go nowhere, as I am only plugged into New York corporate law firm headhunters, which are useless for a family lawyer in Connecticut. But my marriage has by then fallen apart and — mirabile dictu — Kathie suddenly notices me in a whole new light.  Details can be spared here, but the bottom line is that the dog has finally caught the car.

Kathie and I were married in 2004.  In my wedding toast, I noted that one of the best things about marrying someone who knew you in junior high school is that you don’t have to worry about your old pals telling your wife what a jerk you were at that age; she already knows. And Kathie loves to tell the Valentine card story — though she admitted to me that, when her mother came across it many years later going through her stuff, she told her,after a little hesitation, to throw it out.  She also tells me that she was mortified when I once asked her if I could carry her books in junior high.  I don’t remember that specifically, but it sounds like just the the sort of stupid thing I would have done.

Anyhow, so much for the unattainability of crushes.  And please feel free to fill in the obvious “old dog/new tricks” references.

23 Responses to The Dog Who Caught the Car