Prompted By Life Before Computers
16 comments. 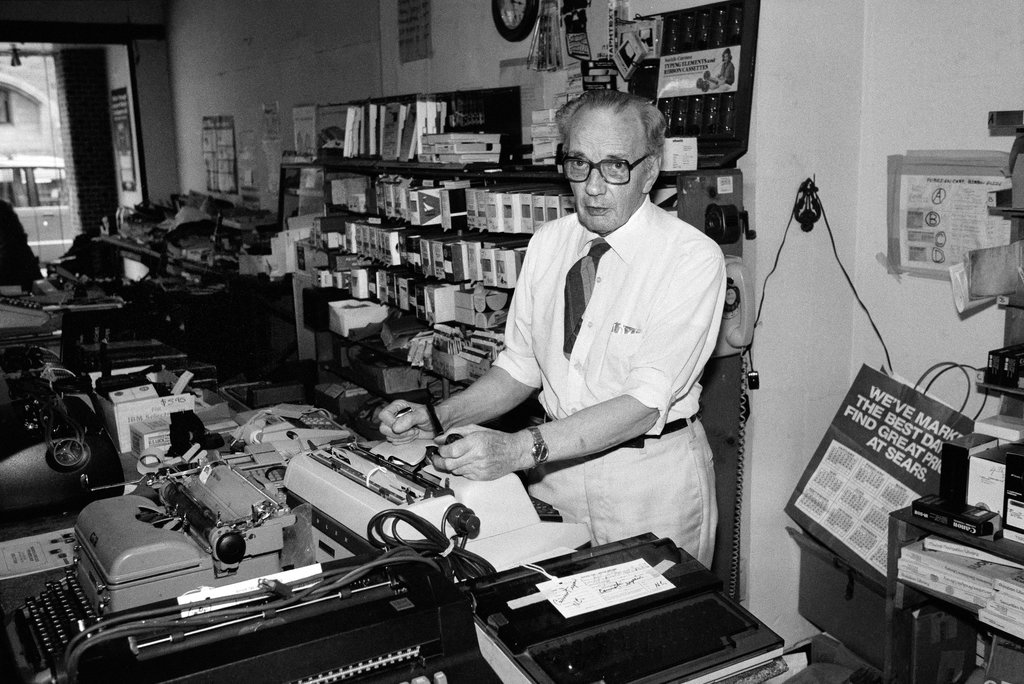 When I first considered this prompt, I realized I had already written three stories that fairly heavily addressed the issue of life pre-computers.  Two are stories about how I did not learn how to type, and the third was about snail mail and love letters. However, I am reticent to re-publish older stories if I can think of something new.  Plus, I couldn’t decide which of these I would have republished.  So I am simply setting forth their links below for those interested in the full survey course of my views on the topic, but you will not  be responsible to know their contents for the final exam:

For this week’s prompt, I just want to address whether I believe life — or at least my life — has been made better or worse as a result of the impact of computers on the two topics of those earlier stories: typing and letter writing.

As to typing, this is, to me, a no-brainer.  Life is better in the computer age.  First, we start with the obvious fact that computers have not eliminated typing (save for voice command apps that are still far from perfect), but, rather, have increased it enormously. That is the real irony of my typing stories.  I thought back then, for a variety of reasons, that this was a skill I could easily do without, and yet I have typed so much more, both personally and professionally, since typewriters morphed into computer keyboards than when I was a reluctant junior high school non-typist.

I am not sure if this increase in typing is more cause or effect, but the greater ease of typing on a computer keyboard is irrefutable..  Let’s start first with erasing and editing.  Anyone remember Correcto Type, White Out and erasable (in theory) Corrable Bond?  Slow, ugly, messy.  And tangled typewriter ribbons and having to replace worn out ribbons periodically?  And jammed keys? And don’t even get me started on making copies via carbon paper: loosening the platen (the typewriter roller), lining up the paper and the carbon paper just so, putting all those sheets neatly around the platen and tightening it, and then making sure you pounded hard enough to make the carbon copy(ies) legible.  Every time I push “print” on my computer, I think, not wistfully, of carbon paper.

Even more broadly, as a lawyer, I can say that the use of computers revolutionized drafting and editing legal documents.  And not just logistically, but substantively, too.  Back in the bad old typewriter days, if you had a 25-page brief and wanted to edit something on page 3 — say, insert an important footnote about a new case — you (or your poor secretary or the beleaguered overnight steno pool) had to also re-type the following 22 pages.  So often you would not even bother making the edit, particularly if you had a very tight deadline.  Were you to not make such an edit now — which, of course, requires virtually no effort at all — you would be guilty of legal malpractice.

To be fair, there is a counter-argument: the romanticism of typewriters. My featured image comes from the New York Times obituary in 2013 of Manson Whitlock, who died at the age of 96.  Manson was a resident of my hometown of Bethany and I was friendly with his two sons growing up.  But he was famous for a typewriter sales and repair shop in New Haven that he and his brother ran for years and years.  It was right next to the Yale campus and was the ne plus ultra of typewriter shops.  Here is Manson’s full, beautiful Times obituary for those who are interested.

The last lines of the obituary are particularly poignant:

“A man of sober reserve, Mr. Whitlock could wax uncharacteristically philosophical about his long, symbiotic relationship with his charges.

And many others have waxed poetic about the magic of typewriters.  They marvel at their engineering and design, the distinctive sounds they make and, of course, the tactile effects of typing itself.  Most of these aficionados are famous authors who have stubbornly or nobly (choose your adverb) refused to convert to computers. And even Tom Hanks is an avid collector and has written an ode to typewriters called “Uncommon Type”: 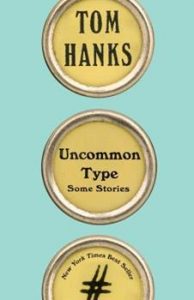 So, yeah, I get it, I really do.  That said, feel free to call me a techno-fascist, but give me a computer keyboard to type on any day of the week.

However, I am far more of a romantic when it comes to the subject of my third earlier story: letter writing. Pardon, once again, my pretentious French phrase dropping, but there is some sort of  je ne sais quoi to letter writing that is not captured by emails.  It is presumably a combination of the personal handwriting, as illegible as it may be, the effort involved in writing and mailing and, in some odd way, the fact that it is not received instantaneously.

I was reminded of this magic just two weeks ago when I learned of the death of one of my mother’s closest friends in Bethany (and sort of a second mother to me).  I heard about this via emails from her two sons, who were among my best pals growing up.  Of course, I responded to them quickly via emails and said many nice things about their mom and even sent them both the lovely picture of our two mothers together at my mom’s 80th birthday party which I attached to my recent story about my “Tennis Mom.”  In other words, I said and did exactly what one says and does with a condolence note.  And yet it didn’t quite feel like enough for this sad occasion.  So I pulled out my fancy, and rarely used, note cards and wrote them formal condolence notes, even though I really had nothing more to say.  It just felt right.

By the way, for those of you lucky enough to never receive them from me, this is what my fancy note cards and envelopes look like: 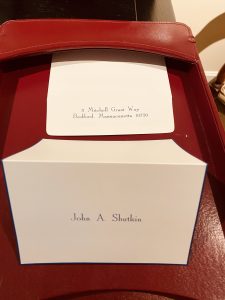 In a similar, nostalgic vein, I was tempted to write another snail mail letter to my high school girlfriend whom I wrote about in my “love letters” story.  (We have been in occasional and friendly contact over the years; she even attended an awards ceremony for me at our high school a few years ago, so it would not have been entirely creepy.)  But, for any number of pretty obvious and good reasons, I ultimately decided against it.  Plus, in what is a fitting ending to this story about the advent of the computer and the concomitant near-death of letter writing, I realized that, while I have her email address, I do not have her mailing address.

16 Responses to The Good Old Days?