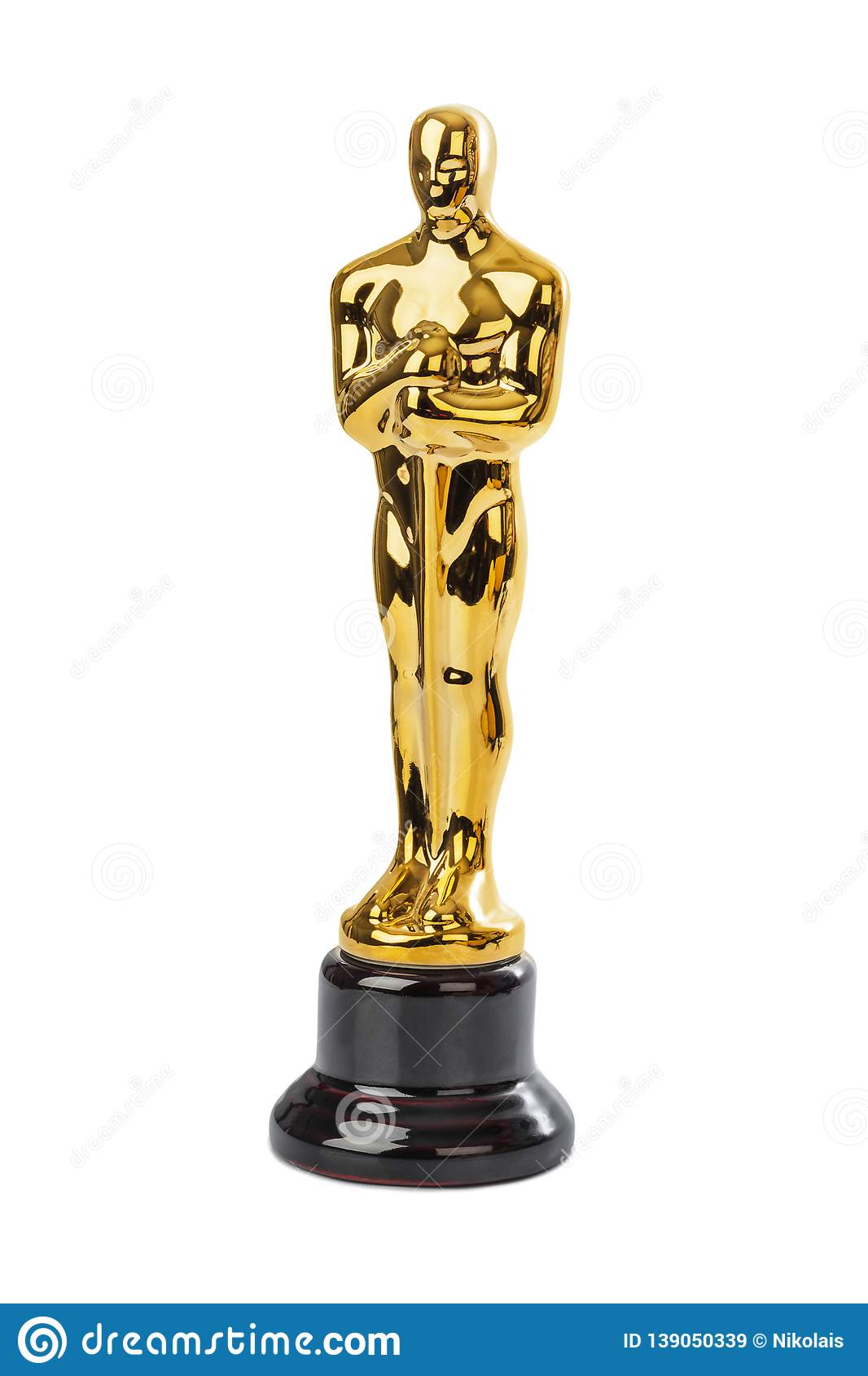 Upon seeing this week’s prompt, I quickly realized that I had a ton – dare I suggest a whole parking lot? – of stories on the topic, banal though it may seem.  And in sorting through them in my mind, I further realized that I could put together several “Best of….” categories to present my favorites.  But what to call this listing?  Well, “The Academy Awards for Parking Stories” sounded suitably lofty (and is the inspiration for my featured image of the Oscars), but then I had an even more perfect inspiration.  Why not name the awards after undoubtedly the greatest – and, OK, probably the only – novel ever written about parking?  I speak, of course, of “Tepper Isn’t Going Out,” by the brilliant New Yorker humorist Calvin Trillin.  Here is the book cover:

I recommend the book to everyone, even those fortunate few who have never known the non-joy of parking in NYC.  In any event, it was clear to me that, in devoted homage to it, the awards I had in mind absolutely had to be called “The Teppers.”

And so, without further ado, here are my very own Teppers:

Worst Parking Experience Ever –   An easy choice.  This was when my car was towed away to the NYC pound on the day I graduated from law school.  I described that all around horrible day in this Retro story from last year.

Best Parallel Parking Experience Ever – Again, I can refer back to a previous Retro story.  In this case, the one about taking my first driver’s test in New Haven on the day of the Great Blackout in 1965.   While I did not have to take the vision test, I still had to parallel park on a street  – while cars were whizzing by in the absence of any operating traffic lights.  Intense pressure to be sure, but I nailed it on my first try.

Most Uplifting Parking Experience – Yet again I can dip into my treasure trove of Retro stories.  Here I write movingly (yeah – pun intended) about the evolution of my friendship with the parking lot attendant in New Haven the summer after my first year of law school.

This experience took place my senior year in high school, when my girlfriend and I sought a little bit of “private” time together after seeing a movie.  I pulled into an empty – and, I thought, pretty hidden – parking lot behind a strip mall on the Boston Post Road and we began to engage in some extracurricular activities.  Suddenly, the worst happened – well, nothing broke, so I guess this was only the second worst: a cop is standing next to the car blinding me with his flashlight and yelling at me.  We quickly re-arrange ourselves and I get out of the car, while I am quietly panicking about whether or not Connecticut has any laws about unlawful carnal knowledge of a minor female.

Of course, the cop first asks to see my driver’s license and, for a moment, the smart ass in me wanted to respond, “Why? As you can see, I’m not driving,” but I wisely resisted and behaved myself.  Good thing, too.  As soon as I showed him my license, the cop smiled and said, “I’ll bet you’re Dr. Shutkin’s son, right?  Great guy. I threw my back out last year and he took wonderful care of me.  Do be sure to tell him that Officer ______ sends his best.  Now, you and your girlfriend here, please park somewhere else.”

Needless to say, we zoomed out of there and headed straight for my girlfriend’s house.  No harm/no foul, as they say.  My girlfriend nobly took equal responsibility for our actions, my father was hugely amused by the story (and told me what a nice guy the cop was) and, perhaps most importantly, I at no point during the experience lost control of my sphincter muscles.  But the experience still wins the Tepper in this category by a wide margin. 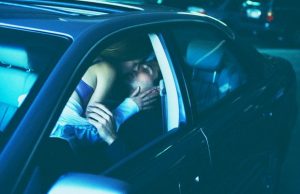 (A stock image — not my girlfriend and me—but in case anyone forgot what this sort of “parking” looked like.)

Most Educational Parking Experience – This final Tepper takes even more explanation.  In NYC, there was (and still is, but to a lesser extent) a rule hated and feared by all on-street parkers known as the Alternate Side Parking Rule (appropriately, “ASP”).  It is a crucial element to understanding and appreciating Calvin Trillin’s book.  Pursuant to ASP, cars could not be parked on one side of most streets in Manhattan for about three hours each day except Sunday, with the prohibited side alternating from Monday-Wednesday-Friday to Tuesday-Thursday-Saturday.  (ASP has now, semi-mercifully, been reduced to two days a week per side.)  Here is the current dreaded sign of ASP: 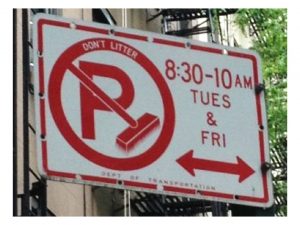 The ostensible reason for ASP was/is to allow for street cleaning— which every true New Yorker realizes is not only a pretext but was a sick joke back in the grimy Mean Streets/Needle Park era of the early 70’s in NYC.  The real reason for ASP was/is to discouraging overnight on-street parking and, if not complied with, at least serve as a steady revenue source via tickets and towing fines for a cash-strapped city.

But the unintended consequence of ASP was massive double parking during its three-hour ban.  This not only tied up streets as much as if there had been no rule, but also created huge anxiety among already neurotic NYC drivers, who needed to move their cars, lived in constant fear of tickets/towing, and had an equal fear of getting double parked in if they were properly parked but then had to use their cars.  Here’s a typical NYC double parked street: 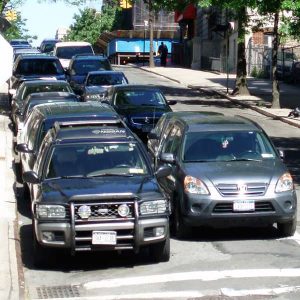 One sidelight of ASP was that it was suspended on holidays. And not just the major ones; it seemed to be suspended particularly on obscure Jewish ones – the kind one only knew about because of little notices at the bottom of the front page of the New York Times about lighting a candle and putting it in a window that day.   I always imagined that some smart Jewish NYC Councilmen had pushed these holidays through, ostensibly to show their devout dedication to Judaism, but really just to get the undying gratitude of their on-street parking constituents.

All during law school, I was one of those anxious neurotic on-street parkers.  Indeed, ASP was the reason for the towing that is the source for the Worst Parking Experience Tepper described above and in my previous Retro story.   But, as a result of ASP, I would often, unless classes interfered, do what so many on-street Manhattan parkers with free time would do: double park and stay in my car so I could: move if the cops chased me or if someone needed to get out/avoid ticketing or towing/and, equally importantly, drive over to other side of the street as soon as the three-hour ban was over and grab a space that would be legal for next day. And thus buy a day’s peace of mind.

But for me, ASP also provided the best “study hall” time possible for plowing through my voluminous law school readings. I had to kill the time anyway and there were few distractions.  And, with all due modesty aside, I did very well in law school.  So, despite my general dread of ASP, I also realize that I owe it a significant degree of gratitude for helping me excel in my studies.  Indeed, if the Teppers were truly like the Oscars, the winners would reel off a list of thanks in their acceptance speeches.  And, upon receiving my Tepper for Most Educational Experience Parking Experience, I would be sure, as well as thanking the Academy (of course), to thank my parents for putting me through law school, my then-fiancée/classmate for all her emotional support, and ASP, for providing me with all that valuable study time.

As a postscript, the summer after graduating from law school, I took the New York Bar Exam, got married to my classmate, and my new wife and I rented our first apartment together.  But almost the most exciting thing for me was also renting a monthly parking space in the garage under our apartment building.  It may have helped get me through law school, but I wanted nothing more to do with ASP after that.

13 Responses to The Teppers