Prompted By Tracking People Down
8 comments. 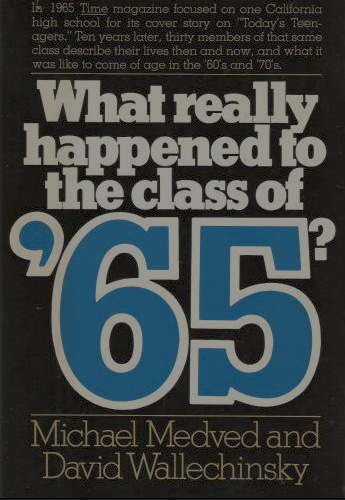 Einstein said it: “The distinction between past, present and future is only a stubbornly persistent illusion.”

I decide to track him down through Dorrie, a mutual friend I’d almost but not quite lost track of...

I graduated in 1965. It’s now 1986. I’m almost 40, and I still have recurring dreams of my teenage crush, Alphonse “Owie” Santolla. His eyes, forever clear and blue, meet mine across a crowd, and I wake up with a jolt, grateful to have seen him once more, and not wanting to let him go again. I shut my eyes the moment I realize they’re open and try to go back to sleep, to sink back into the past, but it’s too late; he’s gone. 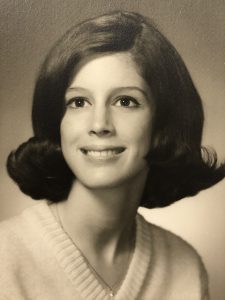 If I could have a do-over, I’d transcend my adolescent angst and awkwardness and actually have a face-to-face conversation with Owie. And then it occurs to me. Why not call him as an adult and find out who he’s become, tell him about my silly but oh-so-serious crush on him, laugh about it with him and, who knows, maybe even get together for coffee. I decide to track him down through Dorrie, a mutual friend I’d almost but not quite lost track of and who, as it turns out, has moved back into the house she grew up in around the corner from the house I grew up in, and still has the same phone number except that it has an area code in front of it now.

“Oh my God, Barbara! I knew you’d call one of these days. Hey, tell your mom I turned out to be one of the good girls. I know she always hated me, I think she thought I was a bad influence on you.” She just jumps right in.

“She didn’t hate you, Dorrie, she just didn’t trust you. She thought you stole a Nancy Drew book from our Blue Bird library,” I say. My mother had been our 4th grade Blue Bird leader, and the library a cabinet in our den.

“I don’t know, maybe I did steal it, I don’t remember. But I do remember your mom didn’t like me and it really bothered me,“ she says. “I guess it still bothers me,” she laughs. “I guess some things never change.” I have no idea what Dorrie looks like these days, but she hasn’t changed at all personality-wise, still upbeat, wry, sarcastic. I always liked her.

“Well, forget it already, I’m sure she has.” Actually, if I were to tell my mom we were in touch, she’d undoubtedly bring up that book. “You were one of my favorite friends, the coolest of all.”

We go back and forth a bit to catch up, and then I come to the point. “So listen. I was thinking about calling Owie. I know you guys were good friends in high school, any chance you’re still in touch with him?”

“Oh, God, Barbara, are you kidding me? Owie’s long gone.“

“Heroin!” Time skips a beat, then another. “Oh, his poor mom, and his brother!” And with a whoosh, time slides and a memory of a sunny Parents Day floods in, he and his older brother, Tony, proudly strolling around the quad with their mom, each with an arm around her waist. I’m watching from the sidelines, as usual; Owie’s oblivious to me. I wonder if he was into drugs even back then. I hadn’t smoked pot yet, hadn’t even thought about it, but that was just a matter of time. I wonder what he was really like. I wish I’d gotten high with him — wait, Owie’s gone. He can’t be gone, he just can’t be. Dorrie’s voice drones on like talk radio in the background, on and on about her mother and her sister and her son, then she brings me up to date on a bunch of our old friends. I insert a half-hearted “Really?” here and an “Oh my God” there, but I’ve lost interest in the conversation, can’t think of anything else to say, and now I just can’t even listen any more. Finally she takes a breath to light up.

“Shit, I lost track of time! I gotta run, Dorrie, gotta go pick up my daughter, but it’s been great catching up, really great,” I lie. “Let’s stay in touch.”

Owie dead? Have I been dreaming of a ghost all this time? 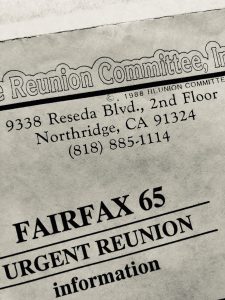 Fast forward a few years and it’s about time for my 25th high school reunion. Judy — my closest friend since high school — and her husband, Ken — they met during our senior year — are going, and even though I haven’t attended any of the past reunions because I’d rather just forget high school, for some reason I want to go to this one. I call The Reunion Committee, Inc., an independent company whose business it is to organize reunions across Southern California, including ours. Sure enough, I’ve moved so many times I’m not even in their database any more. I give them my current address on Albata Street and in time receive my invitation.

Oddly, I also receive an invitation addressed to Alphonse Santolla Smith — that’s Owie, but at my address, with my last name? 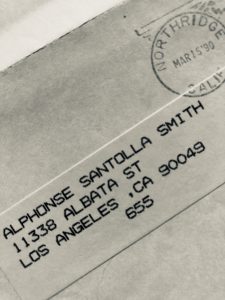 I call The Reunion Committee and first inform them that, to my knowledge, Alphonse Santolla is deceased, then ask why his invitation was sent to my address with my last name. The woman I speak to can offer no explanation, it’s simply the information they have on file for him, and she thanks me for informing them of his passing and hangs up before I can ask any more questions. It makes absolutely no sense whatsoever.

As the reunion draws near, I can’t help but wonder if perhaps, to quip Twain, the news of Owie’s death was greatly exaggerated. Dorrie could have been mistaken, or misinformed. Maybe he’s still alive and they tracked him down. Maybe he’ll be at the reunion. Maybe we’ll live happily ever after.

I have my reunion photo taken alongside Judy and Ken. Of course I’m not the only one without a partner, but it reminds me of the musical chairs we played as kids when, as usual, I’m one of the first ones left standing, smiling stiffly as if I’m having fun watching as everyone else scrambles to grab a seat and viciously squirms to push off whoever else might have landed on the same chair. I always hated that game. Not that I haven’t sat in my fair share of chairs since then, if you catch my drift. And I could have brought a date to the reunion if I’d wanted to. Most of the gals are in cocktail dresses, their guys in jackets and ties. I’m wearing a catsuit beneath a mid-length black lace dress (with a skirt guaranteed to swirl should I happen to twirl) and black cowboy boots.

Sure enough, Billy, my “first,” is here with his wife, Carolyn, the girl (now a woman, of course) he took up with right after me. He looks shorter than I remember, she looks prettier. We strike up a friendly conversation, and eventually Billy asks Carolyn if she minds if he and I dance. She doesn’t, so he takes my hand and leads me to the crowded dance floor. He’s definitely shorter than I remember.

“So how come you never come to the reunions?” he asks. “I always hope you’ll show up.”

“I’m not sure why. I’m glad I came to this one, though,” I say. “But why does everyone else looks so old, and conservative? When did that happen?” We look around, then back at each other, and he laughs. Same old laugh.

“Hell, I don’t know, but you look great, Barby,” he says, “really great. Just like I remember you.” No one has called me Barby since high school. His boyish charm is still intact, and with a flicker I remember falling hard for him. Falling.

“Yeah, right,” I say. “But it is kind of weird, isn’t it, how we’ve all changed but not really changed.”

“Too bad they’re not playing our song. Remember? “Then your lips cling to mine and it’s wonderful, wonderful . . .” he croons softly. Time tumbles as I remember kissing him for the first time at a pool party while dancing to Johnny Mathis, the scent of night blooming jasmine curling around the silky refrain, kissing, kissing. Now we both laugh . . .he never could carry a tune. I’m actually having fun. We look for Carolyn, spot her watching us, and wave. She flashes a big smile and waves back.

“I just can’t believe we’re dancing,” Billy says. “And I can’t believe I get to tell you something I’ve been wanting to tell you since high school. I’ve always felt shitty about the way I treated you, and I want you to know how sorry I am. I’m really, really sorry.” 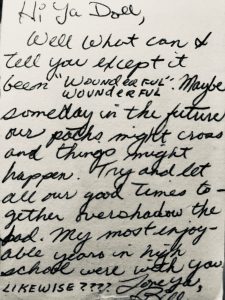 “You really were,” I say, trying to keep it light but thinking “Yeah, well, not only were you a schmuck, you were a bad speller and lousy with syntax.” Because I still have his yearbook inscription, long ago memorized and impossible to forget. Out loud I say, “But thanks for the apology, it means a lot to me.” I’m surprised it means anything to me, but it does. The song ends (without a twirl), we head back to our separate tables,  and I smile as I see him kissing Carolyn before he sits down. Like time, feelings contract and expand, but they don’t go away. They might change, they might hide, they might lie in wait, but they don’t just go away.

I caught up with quite a few friends that night. A group of us even went on to Canter’s Deli some time after midnight, just like old times. I kept an eye out for Owie, but he never showed up. Because, as I have since learned, he did indeed die, in 1974, fifteen years before that reunion. Tony, his brother, died in 2013. Tony’s obituary mentions that “he was raised by his hard working mother and was an amazing mentor to his little brother Alphonse.”

It’s 2020 now. The recurring dreams have ceased. I guess it’s about time.

8 Responses to Time and Again