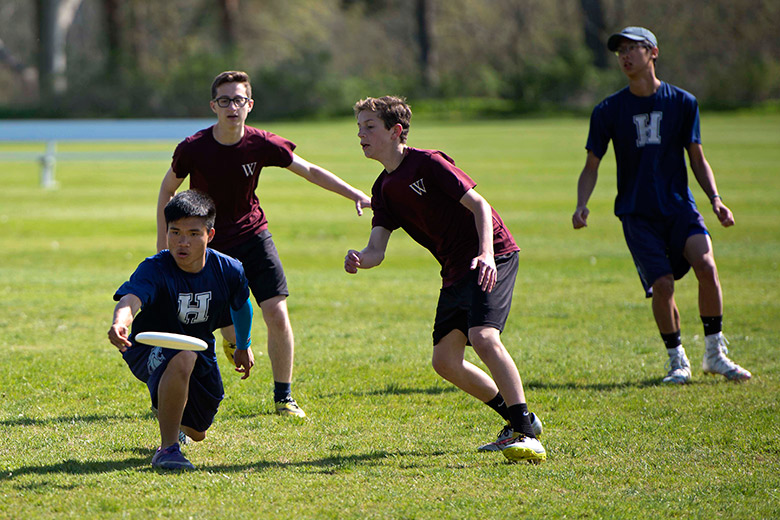 By some quirk of scheduling, my sophomore year in high school (1964-65), a few of my pals and I ended up in the same PE class as my brother, a senior, and his pals.  This was not too bad; my brother and I got along fine, I hung around with a lot of his pals (including Richard, of my summer vacation in Europe story), and it is not as though we hadn’t seen each other naked in the shower more than a few times.

We quickly realized ,,, that the rules of touch football could easily be adapted to Frisbee, so off we went to our high school football field -- turf none of us had ever set foot on other than those in the marching band -- to play what we called, at the risk of obviousness, Frisbee Football ("FF").

My brother and his pals were the science and math geniuses in their class.  Semi-nerdy, I guess, but all very interesting guys. One of his pals was the son of a Yale professor who was in charge of the Yale Observatory, which had been built in our small, rural town because its total darkness at night (“night sky”) was far better for celestial observation than in glitzy, urban New Haven.  In fact, their family lived in an apartment that Yale had built adjoining the Observatory because of his father’s need to be on-site pretty much 24/7.  So, too, the Yale undergrad astronomy majors and grad students had to be there so frequently overnight that there was a mini-dorm and cafeteria built for them as well.  Anyhow, we hung around the Observatory with these guys a fair amount.  Not only was the Observatory an amazing place — what with several enormous telescopes in separate buildings on the grounds and all sorts of scientific and mechanical equipment — but the Yalies, even if pretty nerdy, were at least college and grad school nerdy, which was way cooler than high school nerdy.

And, given that most of their work was at night, what these Yalies did a lot of to kill the time during the day was to throw around this new-fangled plastic disc called a Frisbee, which was just getting to become popular on the Yale campus (allegedly originally using a tin pie plate from the nearby Frisbee Pie Company in Bridgeport, CT).   So we high school kids got introduced to Frisbees very early on, and some of us — present company excluded — got pretty proficient at throwing and catching it.

Meanwhile, back at PE, my brothers’ pals were not too interested in whatever was going to be the required activities in the class and were sufficiently unfazed by school authority, particularly as seniors who were all well assured of getting into good colleges regardless of their PE grades, to suggest to the PE teacher that they be allowed to toss around the Frisbee, at least during the months of outdoor activities, in lieu of whatever was assigned.  The PE teacher was a jock’s jock — coach of the basketball team and, by default, also coach of the tennis team — but a fairly laid-back guy.  He agreed to it with one condition: we couldn’t just toss the Frisbee around; there had to be some sort of a competition.

This condition seemed reasonable enough, but there was just one problem: there was no Frisbee sport yet.  Ultimate Frisbee (“UF”) — I googled this to confirm it — was not invented until 1968 at Columbia High School in Maplewood, NJ (Mark Rudd’s high school, for those keeping score at home).  We quickly realized, however, that the rules of touch football could easily be adapted to Frisbee, so off we went to our high school football field — turf none of us had ever set foot on other than those in the marching band — to play what we called, at the risk of obviousness, Frisbee Football (“FF”).

The only real alteration we made to the touch football rules for FF was to require that there be at least one pass (not counting the hike) each play.  When UF came around, it required that players could not run with the Frisbee; they had to throw it again from wherever they had caught it.  FF didn’t have that rule, but it didn’t really make that much difference.  I mean, who wants to run with a Frisbee?  The whole point is to throw and catch it.  Duh.

Anyhow, our FF games evolved very quickly and they were actually great exercise, as anyone who has ever run back and forth on a football or soccer field for 45 minutes can attest.  And the other kids in PE began noticing it and a good number of them, though originally scornful (as only high school jocks can be), chose to join in too; so much so that we ended up playing two games at once, also using an adjacent soccer field.  And the PE teacher himself even came around about its exercise benefits, particularly after seeing some of my brother’s pals who were able to whip a Frisbee downfield about 60 yards on a dead run.

Of course, it was cool when UF was invented a few years later and grew and grew in popularity.  However, whenever I hear UF spoken of, I smugly think to myself (as does my brother, and probably the Wright Brothers did as well), “Yeah; but we got there first.”

p.s.  Coincidentally, the featured image here, which I just pulled off from some stock internet Frisbee images, is a bunch of guys playing UF at The Hotchkiss School, which is where my wife’s kids went. You’re welcome.