A turning point can be something good that happens, or something bad. A birth, a death, a national election, or even someone new that you meet by chance, can turn your life upside down and make it so much better or worse.

A birth, a death, a national election, or even someone new that you meet by chance, can turn your life upside down and make it so much better or worse.

Sometimes it seems that my life has moved, is moving, in a pretty straight line, but this prompt has made me examine that trajectory and think about the times that my path was dramatically altered. Certainly the birth of each of my three children changed my life in ways that I could not have imagined before it happened. But that is an experience shared by almost everyone who has ever had children, so I don’t want to write about that. Trying to pick the one event that dramatically turned my life in a new direction inevitably takes me back to the 1968 Democratic Convention in Chicago.

I had spent the summer working for the McCarthy campaign in Washington D.C., and in mid-August drove out to Chicago with three other young women only slightly older than I. The week before the convention we were put up in the homes of Chicago-area McCarthy volunteers. My friend Ellen and I shared a room in a beautiful house owned by a U of Chicago professor. Every day we went to the Amphitheatre where the convention was to be held, getting the McCarthy area ready for the delegates who would be there the following week. The week of the convention itself we were not allowed in the amphitheatre because we did not have credentials. So that week we worked and slept in the Hilton Hotel, where the McCarthy campaign had two entire floors. It was hectic and exciting, and at that point I was still naive enough to believe that McCarthy might be nominated for President.

All week there had been demonstrations going on in the streets, organized by the Yippies (including my beloved Phil Ochs), but we had stayed upstairs in the Hilton because we were still being “Clean for Gene.” We heard stories about clashes with the police and the National Guard, but had not seen any of it. However, when the news came that the delegates had nominated Hubert Humphrey, who had not participated in a single primary, as the Democratic candidate for President, we were outraged, and we were out of there. We went down to the street to join the protests and fight the pigs. Grant Park was right across the street from the hotel, and it was mobbed with demonstrators. At first it was very cathartic being out there, yelling at the cops and feeling the energy of all the other demonstrators, but then they started firing tear gas into the crowd. Suddenly I couldn’t breathe, I couldn’t see, and I couldn’t stop coughing. 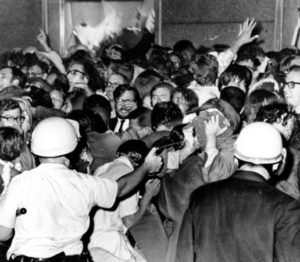 Somebody grabbed my hand and said “RUN,” pulling me along. I ran blindly, following this unknown person who was holding my hand. We ran down to the end of the block and then turned the corner, so that we would be out of the path that the wind was blowing the tear gas. We stopped, leaning against the side of a building along with many others. Somebody had a bag of grapes and was passing them out, saying “here, eat some grapes, it will make your throat feel better.” When he offered me a bunch of grapes, my immediate response was “Are they union grapes?” (I was a strong supporter of Cesar Chavez and the UFW even then.) He said, “I don’t know, just eat them!” So I did. I figured under the circumstances Cesar would approve.

I went back to the Hilton, and was regrouping in the lobby, when the cops came in and said that everyone was under arrest. They kept us there for the longest time, and even when we told them we were staying there in the hotel, they wouldn’t let us go upstairs. Finally, after what seemed like hours, Senator McCarthy came to the lobby and vouched for us and convinced the cops to release us. I don’t think all of the people in the lobby were actually McCarthy staff, but they all came upstairs with us anyway, and just hung out wherever there was room. The next day (which was actually my birthday), the Senator took all of us who were on his staff back to New York or Washington in his private plane. The Convention was over and he wanted to get us safely out of there.

Even in high school I was pretty far left in my political beliefs, so the Convention didn’t change my positions on the issues — except to make me hate and distrust the police — but it made me cynical about working within the system, and expecting change to occur because it was right. I now saw that nothing would be accomplished without organizing and fighting every step of the way. At college I joined SDS. I occupied a building to demand that ROTC be removed from the Harvard campus. I went on numerous marches and demonstrations, in Boston, in New Haven, in Washington. For a while I truly believed that there was going to be a revolution, and that I would be out on the barricades killing pigs.

Eventually I realized that the revolution was not going to happen, and I was not going to kill any pigs. I don’t know if that was another turning point, or just coming to terms with reality as a result of growing older. I’m certainly glad now that I never killed anybody. But it’s a little disappointing to see that we haven’t come as far as we should have in 48 years. Maybe I, or we, got too complacent once we grew up. Or maybe there is another turning point still to come.

[The title of this story is a line from Changes, one of my favorite Phil Ochs songs]

8 Responses to Universe ablaze with changes