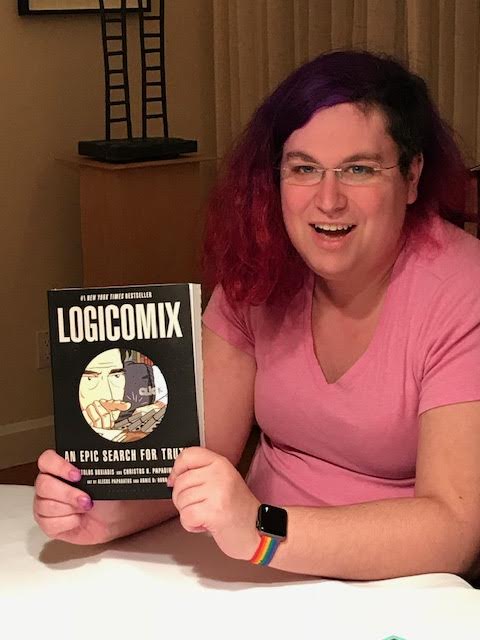 The  blog was called  “Today, I feel…” and began on Feburary 3, 2014. He sent us the link many months later, called and told us he had “gender dysphoria”. We didn’t know what that meant. Our blue-eyed second born, who had so many issues growing up, seemed to be doing pretty well. After years of dealing with multiple diagnoses from ADHD to Asperger’s syndrome to Child-onset Bipolar Disorder (useful for getting him out of the public school system into a special education environment, but he only suffers from depression; he is not bipolar), he was out in the world and functioning. As a child, he had difficulty writing and threw amazing temper tantrums, going on for hours. But he was past all that. He graduated with a BS in Computer Science and a 3.72 grade point average from Brown. He went to work at Apple in Cupertino, California right out of college. He lived on his own, learned to drive, keep his own home, checkbook, doctor’s appointments. Yes, he was doing well, we thought.

So we read the blog and learned that his depression continued, but was more than we thought…it was about the very core of his existence; his gender identity. He had doubted himself for years, at times had a friend apply make-up, shave off all his body hair, dress up like a girl. He liked what looked back in the mirror. That was all we heard for a while; we thought it might be a passing phase.

Shortly before March 9, 2015, she called again and slowly explained that she would begin hormone replacement therapy within the next few days. She was transitioning to female. She explained the difference between sex and gender (one is who you are attracted to, the other is how you identify yourself); that gender is not binary, but a continuum. She was patient with us, as this was new territory for us and lots of new terminology. We gave her love and support, but had questions and concerns. Given the nonsense going on in this country right now about bathroom use, one of my concerns was for her safety. And of course, I wanted to make sure that she was sure about this. She told us she was, that she had been considering this for about 8 years. We had no idea. She had chosen the name Vi (pronounced “Vee”) at the moment, though she was also thinking of Vicki (Dan encouraged that, since it is more common, and just a month ago, she moved to that appellation).

We visited a month later. We didn’t see any real changes. Later, she did laser hair removal of her facial hair. She is experimenting with her style. This year she put a red streak in her hair. The hormones have made her gain weight and given her mood swings…welcome to the female world, my child! She asked us not to tell our friends yet. She wasn’t ready for that.

In April, 2016, she asked us to start using the female pronoun when referring to her, to call her Vi and we could now share the news with friends and relatives. Everyone has been very supportive and upbeat, as we knew they would be, since everyone loves her and wants her to be happy. I asked her to share the link to her blog with me again, since Dan had accidentally lost it when we upgraded computers. I hadn’t seen the blog in a long time. The link is: Vi-improved. She had written more, but stopped writing it just after she started on hormones. The last entry reads: “Today I feel happy”.

Though she is between jobs, she is in a relationship, the first of her life, and when we talk, she always seems upbeat. She finally likes who she is.