Prompted By Tracking People Down
17 comments.

I guess I’m looking for signs that he’s my father, but he just looks like, seems like, acts like an ordinary man to me, any man.

1991. I’m 44, and on a whim I decide to contact my biological father. My mom had told me he lives up the coast in Ventura, so I figure I might as well start by looking him up in the phone book, and what do you know, there he is. I mean, who’s listed in the phone book any more?

“Yes, this is Bob. Who is this?” A wary yet friendly voice.

“Well, this is going to come as a big surprise, but this is Barbara. I’m your daughter from your first marriage.”

“Well. That is a surprise.”

“I promise I don’t want anything. I just wanted to make contact, to let you know I’m out here, I live in L.A., and if you’d like to see me, I’d love to see you.”

“Well, now. Well, of course I’ll have to speak to my wife, Margaret. May I call you back?” He’s very formal.

He does call me back, and we set a date — my birthday, as it turns out — to meet halfway: lunch at Charley Brown’s Steakhouse in Thousand Oaks.

Coming in from the bright sunlight, it takes a while for my eyes to adjust. I scan the large dining room. Maybe that’s him, sitting at a four-top with a woman, and as I walk towards them, he sees me and stands up. We’re all smiles, we hug, the woman stands up, he introduces her as his wife, Margaret, we hug, and then we all sit down. It’s a bit awkward getting started, but soon the waitress swoops over and my father tells her this is a celebration and explains that I’m his daughter and we haven’t seen each other in forty plus years, and it’s my birthday, and she gets excited and calls another waitress over and the next thing you know we’re all drinking champagne and toasting.

It’s not what you’d call a reunion, because we don’t really even know each other — my mom left him when I was just six months old and I haven’t seen him since — but we start chipping away to catch up. Of course I tell him about my brother Larry — his son — and yes, he knew about his death at just 23 but, oddly, doesn’t seem particularly interested in learning any more about him, or about my mother. I don’t know, I guess I’m looking for signs that he’s my father, but he just looks like, seems like, acts like an ordinary man to me, any man. But we’re good, at least we like each other so far, and by the time he picks up the tab, we know we want to see each other again.

Over time I meet my four half siblings. They didn’t know about his first marriage, and of course they’re suspicious of my motives. Why wouldn’t they be? Just as I assured him, I assure them I don’t want anything, and I don’t, at least not monetarily. What I do want is to nurture the bond with this man that is my real father, this quiet, sober, ordinary man, a photographer who also crafts wooden bowls in his woodshop, the man from whom I inherited much of what I now recognize as the genes of creativity.

We stay in regular touch — not close touch, but close enough for me — and I bring my daughter for a visit once or twice. I always refer to him as “Bob.”

Years pass and I’m still seeing my bio dad, Bob, driving up to Ventura at least once a month now, often spending the night in my half-sister Terry’s old bedroom. Margaret has passed on, his kids live out of state, and he’s lonely, although he’s in good health and still regularly plays 18 holes with his pals. I’ve begun bringing him to family events and one Easter he and my mom — his ex-wife — even held hands for a bit. She was interested but he wasn’t, and that was that.

Somewhere along the line I begin calling him Dad instead of Bob, and I begin referring to the man I grew up with, the man I used to call Daddy, as Earl. (The alcoholism finally caught up with Earl, and he died in 1979.) Now I finally have a dad that feels like a dad, a dad that believes in me. New and improved Dad is very supportive — he wants to make up for not having been there when I was a child. He listens and gives me advice on my business ventures. He offers me the money to buy a nice used car when my old one finally conks out, says it gives him great pleasure to be able to help and that it’s the very least he can do for me. He may have a point there, and I graciously accept his generosity. We have so much in common: creativity, bookishness, quietness, genes.

I always look forward to seeing Dad. We usually go to The Sportsman steak house for dinner, settle into one of the red leather booths for a cozy chat, and we each enjoy a dry gin martini, straight up, with olives. Then we go back to his house, get comfortable, and watch a movie. I eventually doze off on the sofa, then trudge half asleep down the hallway and fall into Terry’s childhood bed.

This one time I arrive and he, natty in a sports coat and trousers, has a martini waiting for me. He prides himself on his dry martinis — he uses a tiny spritzer to barely mist an icy frosted glass with vermouth, then adds Bombay Sapphire gin and two stuffed green olives. We sip and chitchat, me sitting on the sofa, he in an easy chair across from me. Our reservation at The Sportsman isn’t for another hour.

“Dear,” he says. I’m still fond of his formal, old-fashioned manner of speaking. “I have something to confess.”

“Uh-oh…what’s the matter, Dad?” Confess? He was a devout Catholic but stopped going to church after Margaret died.

“Dear, you know how much I look forward to your visits,” he says. “I’ve been terribly lonely since Margaret died. You’ve made my life bearable, and I love you so very much.”

“To be honest…goodness, I really don’t quite know how to say this,” he says. “I can’t stop thinking about you.” And then, “ I’m afraid I’ve fallen in love with you.”

“Well, that’s a problem,” I say. Talk about an understatement.

“I know it is, I know it is,” he says. “But I don’t know what to do about it. I think of you as a woman, not as my daughter.” As he speaks, he stands and moves to the sofa, then sits down next to me, too close.

“Well, there’s nothing to do about it. Just put it out of your mind. It’s inappropriate, Dad, and that’s all there is to it,” I say. “I am your daughter, for God’s sake!”

“Yes, of course, of course — his eyes are filling with tears.

I am angry, and confused, and panicked, Had I given him the wrong idea? I continue to visit Bob for the rest of his life, but I never go back alone. 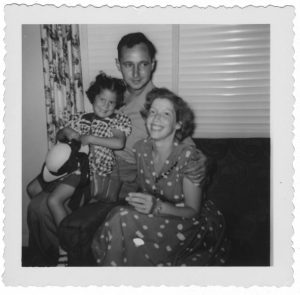 I had given Earl short shrift. My mom was right when she’d dropped that bombshell so many years ago, then added: “Your Daddy treated you exactly the same way he treated your brothers. No one would ever have thought he wasn’t your real father.” He wasn’t my birth father, but he was my real father. He was also complicated, our relationship was complicated, and we never got to sort things out. Talk about regrets . . . I’ve had a few.

17 Responses to Who’s Your Daddy Now?