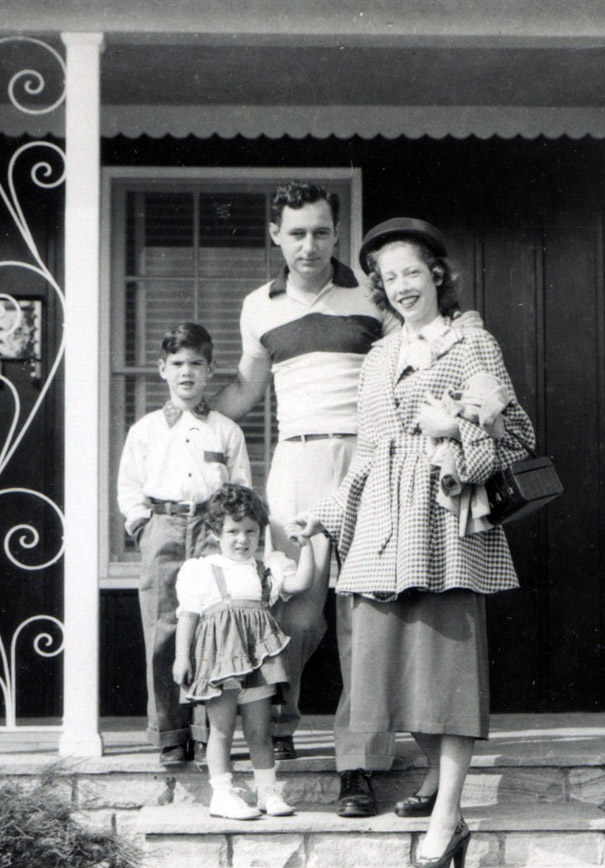 It’s 1976. I’m 30. My mother looks me in the eye for a few long seconds, pressing her lips together, an odd expression on her face. She leans forward. “What if I told you that you were adopted?”

I have the distinct impression of brightening light, as if the sun has just moved out from behind a cloud.

It’s Friday, and we’re having lunch at the Hamburger Hamlet on Hollywood Boulevard, the one right off La Brea. In high heels and a skirt suit with a low-cut blouse, she’s on her lunch break. She’s the head of the children’s department at a talent agency across the street. In flip-flops, faded blue jeans and a sweatshirt, I’ve come across town from a session with my shrink.

“I wouldn’t believe you,” I pretty much snort, leaning back and crossing my arms in front of me. “I know you’re my mom.” Our resemblance, in both appearance and mannerism, is unmistakable. Even now, we both sit with our legs crossed at the knee, one ankle hooked behind the other.

I stare at her as the words begin to sink in. I have the distinct impression of brightening light, as if the sun has just moved out from behind a cloud.

We’re sitting across the table from each other. To anyone else we’re just two women having lunch. Although there might have been a subtle change in our body language, there’s no crying or shouting, no gesturing to betray the immensity of her revelation. But all around me, thought bubbles explode. No wonder . . . No wonder . . . No wonder . . . And then ah, so that explains everything . . . the unspoken guilt I’d always assumed for not feeling like “daddy’s little girl.” The time my big brother tauntingly whispered that I was adopted. The “fact” that all my baby photos had vanished in a flood. And the very real fact that my earliest memories were of people who weren’t my parents.

Right before her revelation, I’d just told my mom about the very odd feeling I’d experienced while talking to Bette, the psychologist I met with weekly in an effort to get to the bottom of my anxiety. Confiding to the shrink about an argument I’d had with my dad earlier that day, tears had streamed down my face yet I felt absolutely no emotion. The disconnect was so absolute and, to me, inexplicable that I had impulsively shared the experience with my mom.

“Your Daddy treated you exactly the same as he treated your brothers. No one would ever have thought that he wasn’t your real father.”

She‘s probably right about that, but without really thinking about it I’d known something was missing. I thought it was me, something missing in me, something wrong with me for not loving him. Relief swept over me like a gentle breeze. It wasn’t my fault. Maybe he didn’t love me, or maybe he’d held back affection because I wasn’t “his,” because maybe he felt awkward, or even resentful. And suddenly I felt a surge of love for him, because now he was just a man, a man who had taken good care of me.

I had so many questions I didn’t know where to start.

“His name is Bob, Robert. He remarried right after we divorced, moved to Ventura, and had four children of his own.”

“You divorced him? Why?”

“Because Daddy and I fell in love.”

I asked her why she hadn’t told me before.

“You’ve always been so sensitive,” she said. “We had no way of knowing how you would react.”

Before I can ask another question she said, “Tell you what, sweetie, Gaga has some things stored in her closet, photos and papers and whatnot. Let’s pull everything out tomorrow and I’ll tell you the whole story. I’ve got to get back to work.”

I persisted. “Ventura? Does he still live there?” That’s less than an hour’s drive from L.A.!

“Yeah, he does,” she said, motioning for the check, “but it would really be best — for everyone — if you didn’t try to contact him.”

“Well, his wife is Catholic . . . it’s just complicated, Barb. His kids may not even know about you. But let’s not rock the boat. Why would you want to make waves,” she said. It wasn’t really a question.

She knew me. I didn’t want to make waves, and I wouldn’t . . . at least not for another ten years.

13 Responses to Who’s Your Daddy?