Will You Still Love Me Tomorrow? by John Shutkin
25
(47 Stories) 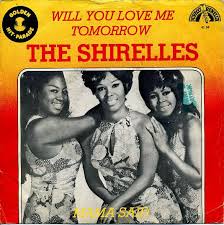 My first date with my first girlfriend didn’t even start as a date.  Rather, my brother  Tom — two years older than I and then a high school senior —  and I had gone over to the home of some brilliant friends of ours on a Friday night in the spring of 1965 to play bridge with Jon (Tom’s classmate) and his younger brother (by one year) David, as we wonkish sorts were wont to do.  Jon was going to Harvard, as was David the next year — and, over the course of time, they convinced me it was my manifest academic destiny to do so as well. Their younger sister Rachel, who was away on some field trip at the time, later went to Radcliffe.  Equally brilliant parents.  Yeah; that kind of family.

Just a great slow dance song, so who was I to complain?  Blessedly, Susan seemed happy to dance it with me, slowly and closely.  And the touch and sweet smell of her still slightly damp hair as she rested her head on my shoulder were intoxicating. I pondered the song's title question as we danced, as well as thinking of another, totally incongruous song title, "I Could Have Danced All Night."

At some point early on in our bridge playing, Jon got a call inviting him and Tom off to some party of their classmates that evening.  Well, we couldn’t blame them for exercising that senior (literally) prerogative and taking off.  David then had the brilliant –that word again — idea of calling Susie, a classmate of Rachel’s whom he had a slight crush on, to see if she wanted to come over, as he knew she also played bridge.  By one of those coincidences that only happen in rom-coms and real life, Susie was having a sleepover at her classmate’s Susan house. (In a rom-com, they would not have had such similar names, but such is real life.)   Susan was also a bridge player, so David called Susie at Susan’s and, though they had just washed their hair and were about to do whatever teenage girls did at sleepovers back then, he convinced them that getting dressed and playing bridge with us would be a good idea.  (I told you he was brilliant.)

So we drove over to Susan’s — David had his license — and picked up S & S and brought them back to Chez David.  I should note that Susan and I had a brief frenemy-esque “history.”  Our mothers knew each other from local Democratic politics, though Susan’s mother was far more successful — she was then a state senator and would eventually become the Connecticut Secretary of State.  More to the point, Susan and I had met the year before when we were chosen by the faculty to give speeches on behalf of our respective classes at the opening of our new junior high school. Neither one of us was shy or falsely humble, so we kidded one another about our own speech being better than the other’s. (In all honesty, Susan’s was better; I was going a bit too much for the cheap laugh.)

In any event, back at David’s, while plying S & S with drinks — probably Tab and Fresca — we chatted away.  I knew that Susan was smart, but I hadn’t realized just how smart — or how, witty, opinionated and outspoken she was.  Plus she played tennis (screw bridge).  I was my usual charming self, and we really hit it off.  I think we then played a few hands of bridge — Susan was my partner or, more to the point, Susie was David’s  —  when David suggested that maybe we should just play some records and dance instead.  (I told you he was brilliant.)

So dance we did, to the usual assortment of rock and roll 45’s.  But the one that David kept playing was the Shirelles’ “Will You Still Love Me Tomorrow.”  Just a great slow dance song, so who was I to complain?  Blessedly, Susan seemed happy to dance it with me, slowly and closely.  And the touch and sweet smell of her still slightly damp hair as she rested her head on my shoulder were intoxicating.  I pondered the song’s title question as we danced, as well as thinking of another, totally incongruous song title, “I Could Have Danced All Night.”

Well, we couldn’t dance all night; we had to get S & S back to Susan’s at a respectable hour.  But, as David drove us back there, Susan and I sat in the back seat holding hands — never had I been happier not to have my driver’s license yet.  And, as we pulled into the driveway, I summoned up my courage and gave Susan what I hoped was a sweet and gentle kiss and, mirabile dictu, she reciprocated very much in kind.

I was pretty sure I had the answer to the Shirelles’ question.

By way of epilogue, Susan and I started dating and went together for most of my remaining two years in high school — which, in teenage years, is essentially a lifetime marriage. And, whenever I hear that song again — most often as sung by its composer Carol King — I think of our dancing to it. 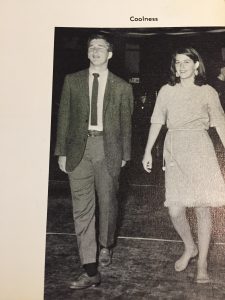 (The photo above is from my class yearbook.  It is from a school dance that Susan and I went to. I may look stoned, but this is simply my usual squinty, goofy pose and the yearbook editor, a good pal of mine, couldn’t resist putting in the picture and its ironic headline.  Susan, by contrast, really did look — and, indeed, was —  very cool.)

10 Responses to Will You Still Love Me Tomorrow?

Our First Date
by Jeff Gerken

My lunch with Omar Sharif
by Marian