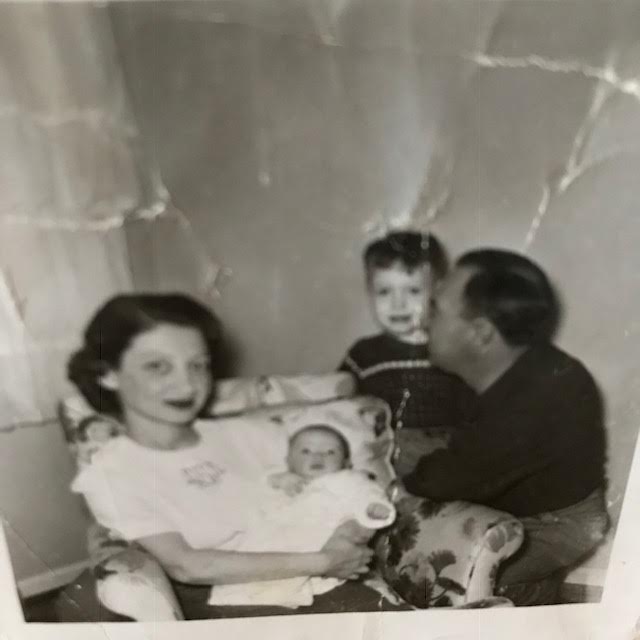 In 1994, I picked a bone with Thomas Wolfe who wrote “You Can’t Go Home Again”. I had stayed away from Detroit a long time, but at that moment, I found that it could be instructive, even therapeutic to return home.

I was born at the close of 1952. Eisenhower had just been elected, we baby boomers were everywhere. America was brimming with optimism. My parents brought me home to a small house in Detroit to join a brother, almost five years my senior. The houses were close together and the neighborhood was full of playmates for us.

My best friend lived next door and days were filled playing dolls, first Betsy Wetsy (unfortunate name), then Barbie. I still have my original Barbie and Ken. My dad owned a car dealership and my mother volunteered her time at charitable organizations, as women of her social status were supposed to do. We came home from school for lunch and days seemed happy and uncomplicated. We were not harried or scheduled. We had time to play with our friends and watch The Mickey Mouse Club on our black and white TV. It really was a Leave it to Beaver existence. My memories of that house are pungent: watching President Kennedy’s inauguration, John Glenn’s historic space flight, birthday parties, puppet shows, romps in the snow, staging Peter Pan on our swing set with my brother and the other kids in the neighborhood, raking leaves and the sweet smell of the resultant bonfire. If there was tension between my parents, I wasn’t aware of it. I felt safe and nurtured.

That all ended in 1963. The millage, the tax used to fund the schools in Detroit, was voted down and the choice seemed clear to my parents: private school or move to the suburbs. We moved to an affluent neighboring suburb on October 1 and I have always marked that date as the end of my happy childhood. The kids were miserable to my brother and me; two gawky, smart misfits. I suffered as the cliquish girls made fun of my glasses, buck teeth, lack of bust line, “orthopedic” saddle shoes in an era of penny loafers. My mother had a nervous breakdown and took to her bed. On November 22, three weeks shy of my 11th birthday, I delivered the news of Kennedy’s assassination to my mother in her bed. I was shattered. I had fallen in love with him after seeing the movie “PT 109” (truth be told, I was seriously smitten with the whole Kennedy mystic for quite sometime, but the movie sealed the deal). My father turned 50 the next day and we had a very grim party in our new house. Somehow, that devastating event seemed to epitomized my unhappiness. 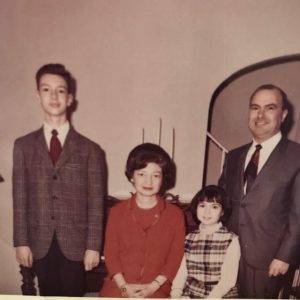 Nothing was ever the same for me. I eventually outgrew that gawky stage, graduated first in my class from high school and went off to an eastern liberal arts college. I married and settled in the east. My father lost his car business in 1967 and my mother’s mental illness finally caused irreparable damage to their relationship, resulting in their divorce in 1981. The tension between my mother and me was never fully resolved, though I moved her to the Boston area 15 years before her death, and cared for her to the end in 2010. Before then, I chose to stay away from Detroit for years and never went back to that little house where I had known happiness.

My kind father, who I still miss so much, died on January 3, 1990 and I began to feel a great need to connect to my past and, more importantly, to share my past with my own two small boys. I began to take them on extended trips to see relatives and favorite haunts from my childhood: the Detroit Institute of Art, Cranbrook, Greenfield Village. I still didn’t venture into the neighborhoods of Detroit. I didn’t know what to expect. One heard so much about the decay of the city, the crime, the poverty. And this was 1994, long before the great recession of 2008! Yet I felt a growing need to see that house again, drive around the block where I learned to ride a bike, where all the kids in the neighborhood would play hid and seek or kick the can until the streetlights came on in the summer. Was it safe to drive around there? I had to find out.

Over spring vacation, 1994, I decided the time had come to return. My boys and I visited my father and his many relatives in the cemetery in Livonia, outside of Detroit proper, but close to the airport, then drove up 7 Mile Road into the city. We passed streets with familiar names where relatives lived before I was born. We found my old elementary school, totally unchanged after three decades. We turned up Briarcliff Road, a block from where Rosa Parks and Aretha are now buried. It looked beautiful, houses well-maintained, lawns manicured. I was told later that the area had private security, but I didn’t know that at the time. Then, before us, was my house. The garage was gone and the backyard was fenced in, but it looked the same. We drove around the block and I pointed out the sights, long forgotten: a distinctive Gothic-style house with a vacant lot next to it. The lot had been overgrown when I was young and we were sure the house was haunted. We would hold our breath and run by when we had to cross in front. The lot was now a lovely garden. The house where a baby blue jay fell from its nest and the mother attacked my neighbor when he retrieved the fallen bird. I had told that story to my 4-year old just weeks before. Houses of playmates and family friends who moved long ago. I so wanted to go into my house. I asked my 8-year old for advice. Should I ring the doorbell? How would the owners react?

The mailman walked up the street. I stopped and explained my dilemma. He offered to ring the bell. The man was home, seemed taken aback, but allowed us to enter, “My wife would kill me if she knew I was letting you in. The house isn’t picked up the way she’d like it to be.” I explained that I had moved away 30 years earlier and never returned. I wasn’t there to do a home inspection, I didn’t care it it was tidy, I just wanted to be in those rooms again.

I sucked in my breath. The walls were painted a different color, the carpeting was different, but little else had changed. I walked into the den. The paneling was still there with the window seat my brother and I always fought over. When I was three, he pushed me away so he could us it as a table for his drawing and I, furious at him, walked behind him and bit what I could reach – his rear end! I walked into the powder room. “My wife fell in love with this”, my host explained. There was the little vanity with a drawer. I had put Barbie clothes catalogues in the drawer, my bathroom reading material. I checked to see if the window still had the frosted starburst glass. Indeed it did, evidently to my host’s surprise. My 4-year old was delighted with the discovery as well. The screened-in porch was the scene of many happy summer days. The awning I had crayoned on was gone. My children were stunned. Had their mother ever been so naughty?

Upstairs was intact: my bedroom, where I sat at the open window and talked to the cardinal family that nested in our lilac trees year after year. They would call, “Ricky, rick, rick”. I answered, pretending that they called my brother’s name. I showed my boys the spot where I had rocked over backwards in a small rocking chair outside my brother’s room and cracked my head open, requiring stitches. They had often been admonished with that story.

We went to the basement and my brother’s Cub Scout meetings loomed up in my memory. I pointed out the scrub sink where we carved our Halloween pumpkin, the storage closet under the stairs that served as a shelter during those terrible Midwest tornadoes. The boys were fascinated, but so, it seemed, was my host, whose name, like my brother’s, was Richard.

I recorded the event with a photograph of Richard, his dog and my boys on the front stoop of the house. I wish I knew his full name and more about him, but it was enough that we shared a love for that old house. 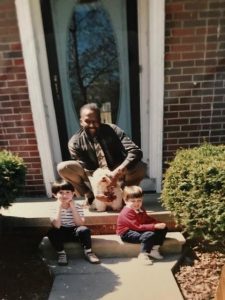 I took my children out to lunch and sat quietly, trying to process what had happened. An image came back to me: the night before we moved, the wardrobe packing boxes stood over my bed, menacing me in the dark. I had terrible nightmares of tall things coming to harm me, a harbinger of the dark times ahead. Then another memory came back to me. My bedroom looked out on the driveway. On the nights when my father worked late, I would lay awake, waiting for him. An indescribable sense of calm and well-being would come over me when I heard his car pull in. I hadn’t thought about that in 30 years. My father now lay in eternal calm outside Detroit, but returning to our childhood home helped me recapture, in some small measure, that feeling of well-being once again.

16 Responses to Family Defined by Place

A DQ, a diner, and a darkroom
by Jim Willis

Over the River Again
by Suzy