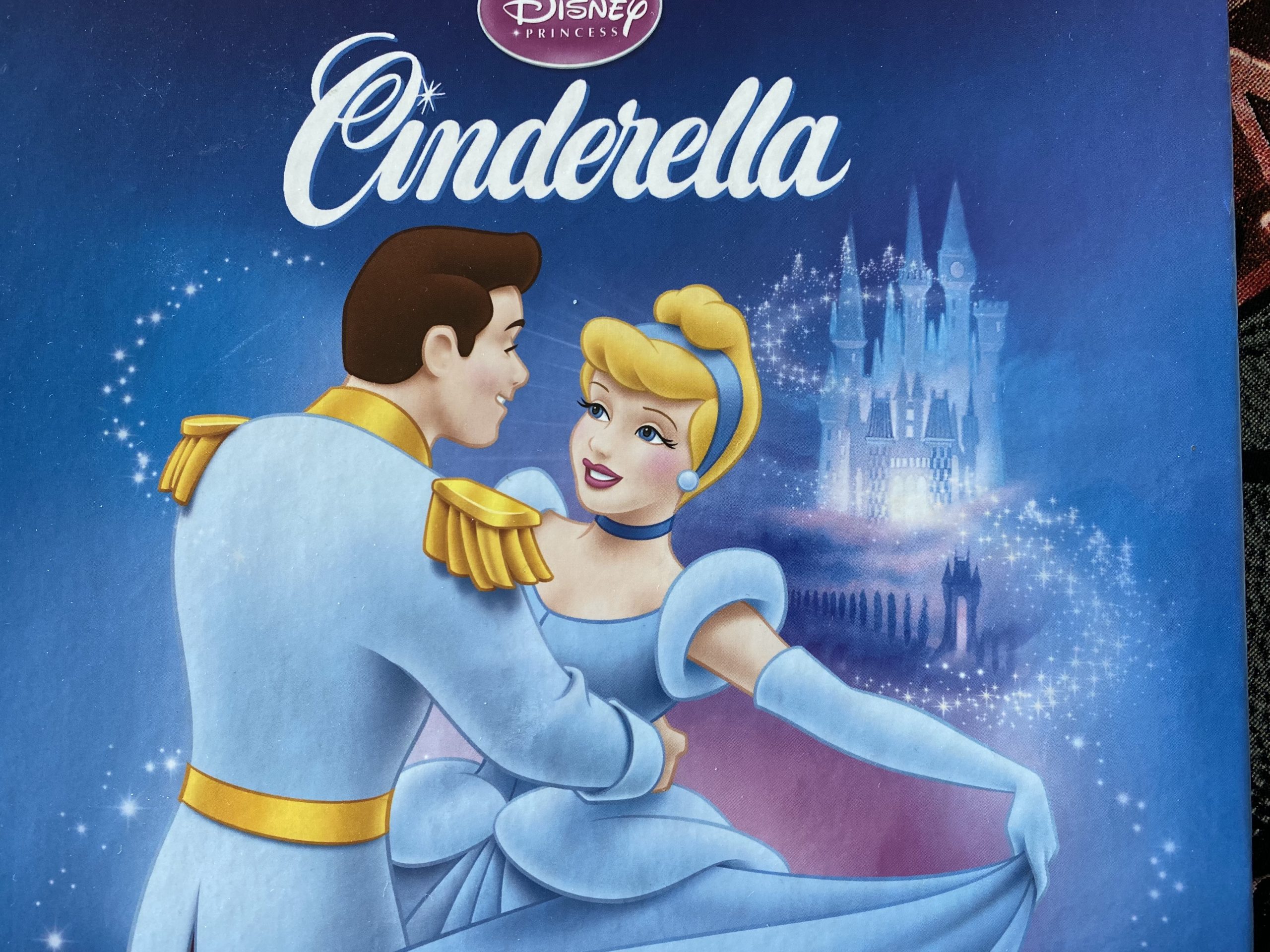 While some critics panned the live action Cinderella movie back in 2015, my granddaughters, daughters, and I loved the latest film version of the story modern women love to hate. I suspect this is a girly thing, but how can I not cry when Cinderella’s courage and kindness are rewarded? In my view, those are pretty good qualities, especially kindness which seems to be sorely lacking these days.

When I saw the original classic Disney cartoon (1950) of Cinderella as a child, I totally bought into her song of "A Dream Is a Wish Your Heart Makes."

When I saw the original classic Disney cartoon (1950) of Cinderella as a child, I totally bought into her song of “A Dream Is a Wish Your Heart Makes.” Like Cinderella, I was taught that patience and goodness were virtues, and that marriage was an important goal for women. So, I was totally in her corner as she waited for her prince to find her and slip that tiny glass slipper onto her perfect foot. Then my tears would start to flow. 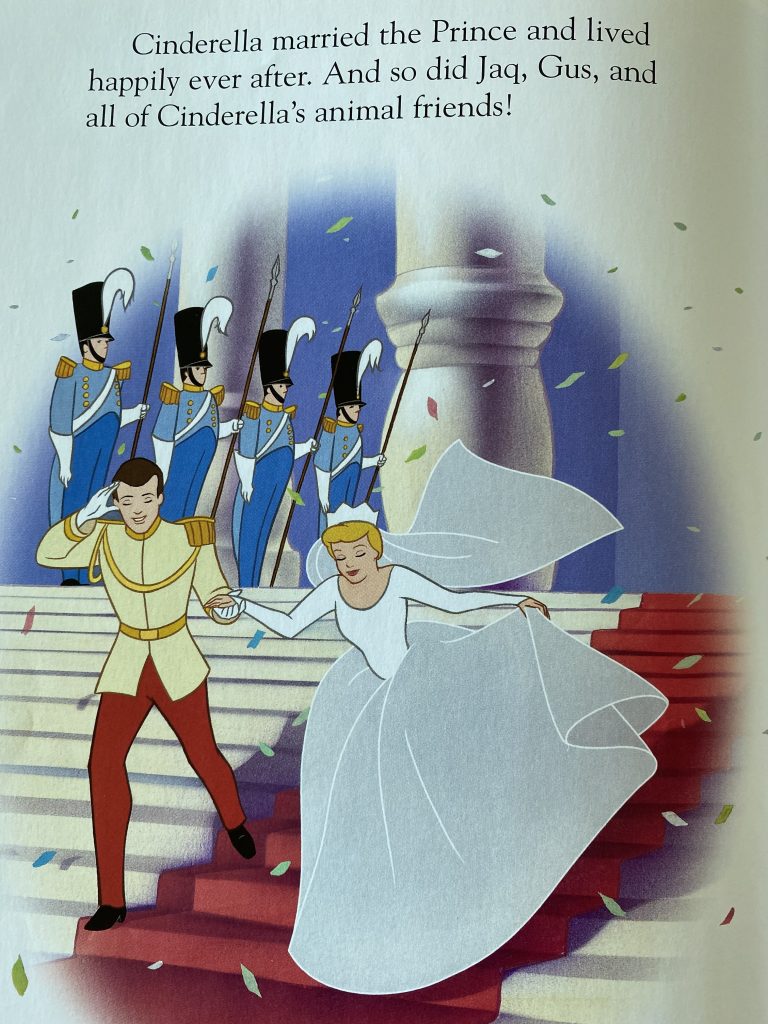 The happy ending from my old book

With the sanitized Disney cartoon version seared into my brain, I was quite shocked to read the 1812 Brothers Grimm Cinderella as part of an anthology of fairy tales. I was probably ten at the time. To my horror, in this telling the father does not die. Instead, he allows the evil stepmother and stepsisters to bully and brutalize his beloved daughter. Even worse, the stepsisters cut off their toe and heel respectively (at their mother’s suggestion, no less) to try to fit into the glass slipper. And if that weren’t bad enough, birds peck out their eyes at Cinderella’s wedding. Now there was a lesson that you had better be good in life.

Several years ago, one of my granddaughters became obsessed with Cinderella. Like her mother before her, she was outraged that the stepsisters teased Cinderella (in the 1974 Disney book version we owned) because “her dress was so plain” and ripped up her first ball gown. To wean her from this book, which I had read to her at least 100 times, we went to the library and discovered that there are over 500 versions of the Cinderella story. 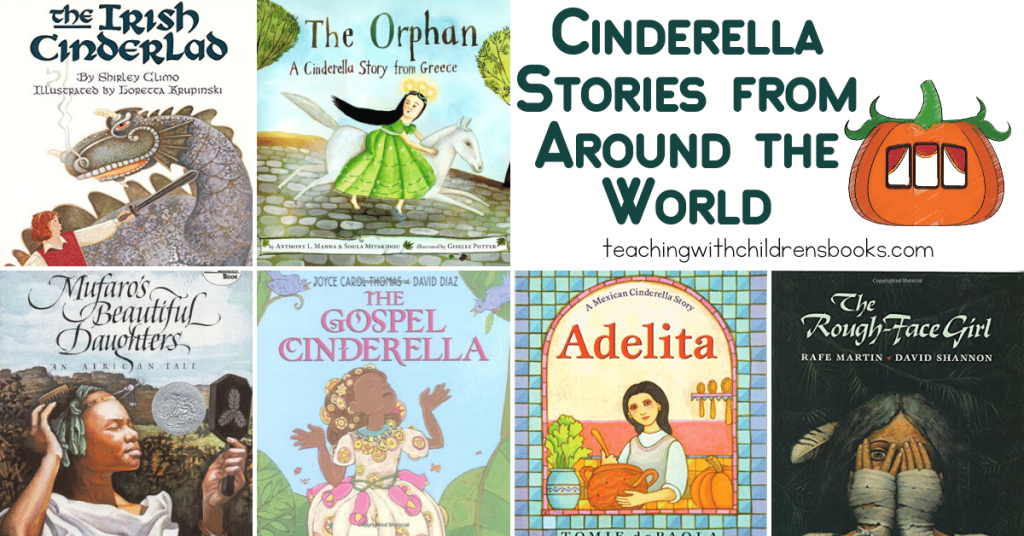 Almost every culture has one. The oldest picture book we found reflected the story’s origins in the 9th century tale of Yeh-Shin, the virtuous and beautiful orphan being raised by her cruel stepmother. It’s the usual stuff – animal friends (fish), menial chores, being left behind from going to the festival, the magical gown and slippers, the lost slipper found by the king, and the tiny slipper fitting only Yeh-Shin. Patience and virtue win, Yeh-Shin lives happily ever after … and this Gramma cried. The 300-year-old story The Little Glass Slipper by Charles Perrault, puts a French spin on the tale and is much more similar to the 1950’s cartoon version I grew up knowing.  Except that Cinderella is even more of a whimp because she pardons her stepsisters and marries them off to noblemen. And the moral is a bit French as well. “Beauty in woman is a rare treasure that will always be admired.” But graciousness is even better. Better still is to have intelligence, courage, good breeding, and common sense, all of which come from heaven. And it is essential to have a godmother, preferably one that is a fairy. 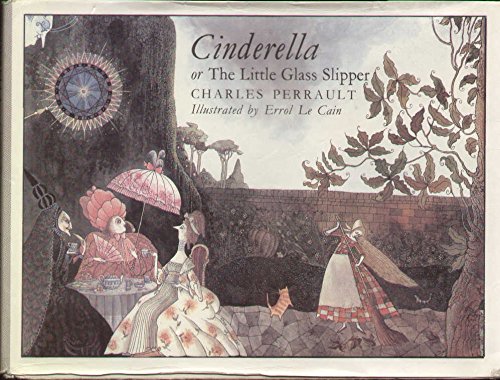 The very grim Grimm version also comes with a moral. Cinderella’s dying mother tells her to be devout and good and wait for God to help her. Cinderella weeps at her mother’s grave every day and endures the torment of her cruel stepmother and stepsisters, as well as the indifference of her father. A dove at her mother’s grave provides the fancy gown, and off she goes to the ball. The Grimm Cinderella is devout and good, I guess, but she doesn’t seem to mind that her stepsisters are blinded when birds peck out her eyes. 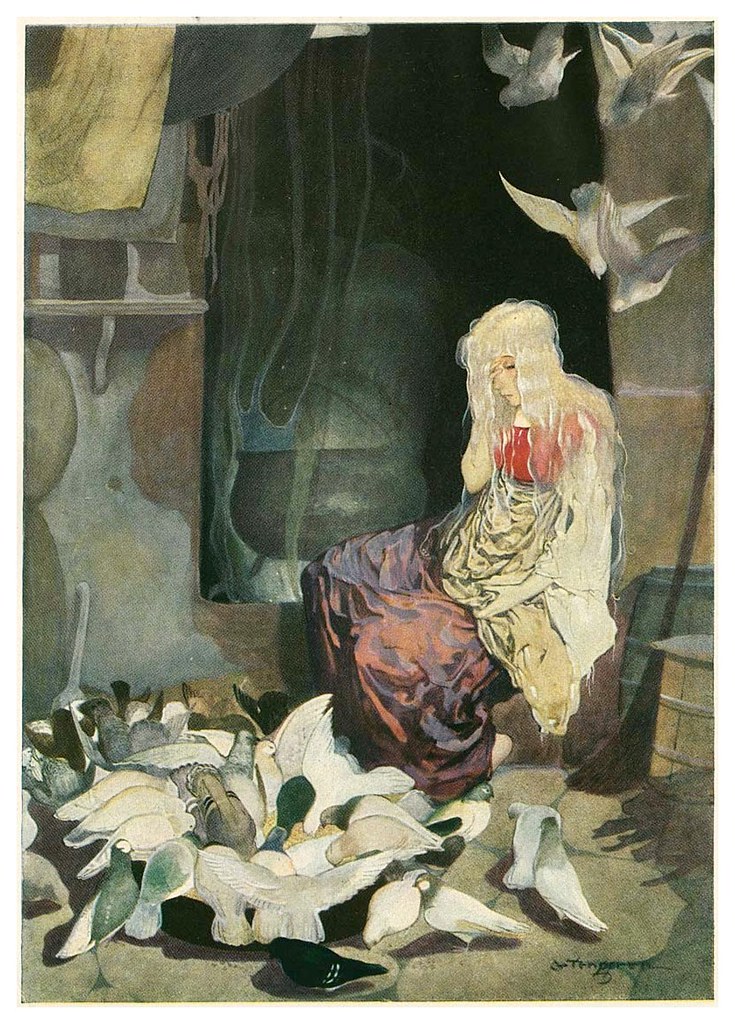 In our quest for multicultural versions of Cinderella, my granddaughter and I read picture books from Africa, Persia, Ireland, Korea, Mexico, Spain, the Caribbean, and even a Native American version called Sootface. And while each is different and reflective of its time and country of origin, Cinderella’s one constant value is her endurance in a cruel world.

In most versions, Cinderella is a passive figure who only breaks down and cries when denied access to the celebration where the prince is to choose a bride. Then a fairy godmother or bird or magical animal transforms her. Of course, once she has a pretty dress and those special slippers, the prince is enchanted and chooses her. Yuck. That is a pretty bad message for young girls. But it is also the basic story in every culture.

The newest movie version changes a few things. The father also dies, so that eliminates the issue of why a parent would allow his child to be mistreated. Cinderella falls for the prince before the ball.  She meets him when she rides her horse through the forest, so that eliminates the issue of her being chosen like a pretty china figurine. And the message from her dying mother (the moral of this version) is slightly different: “Have courage and be kind.”

My granddaughters have been exposed to many modern princesses who have courage and decide their own fate: Merida from Brave, Rapunzel from Tangled, and the most favored of all, Elsa from Frozen. These princesses are strong free agents and have plenty of courage. But kindness? Not so much.

I’m a sucker for kindness trumping cruelty every time, so thus the tears of happiness when Cinderella’s is rewarded. My granddaughter, who was obsessed with the different versions of Cinderella, told me that bravery was the major take away. I pointed out that while the new Cinderella had plenty of courage, she was also kind. I reminded her that it would make a difference in our lives if people could be kind to one another.

“You’re right,” she replied. “But I would have run away.” Maybe she’s right.

16 Responses to A Sucker for Cinderella