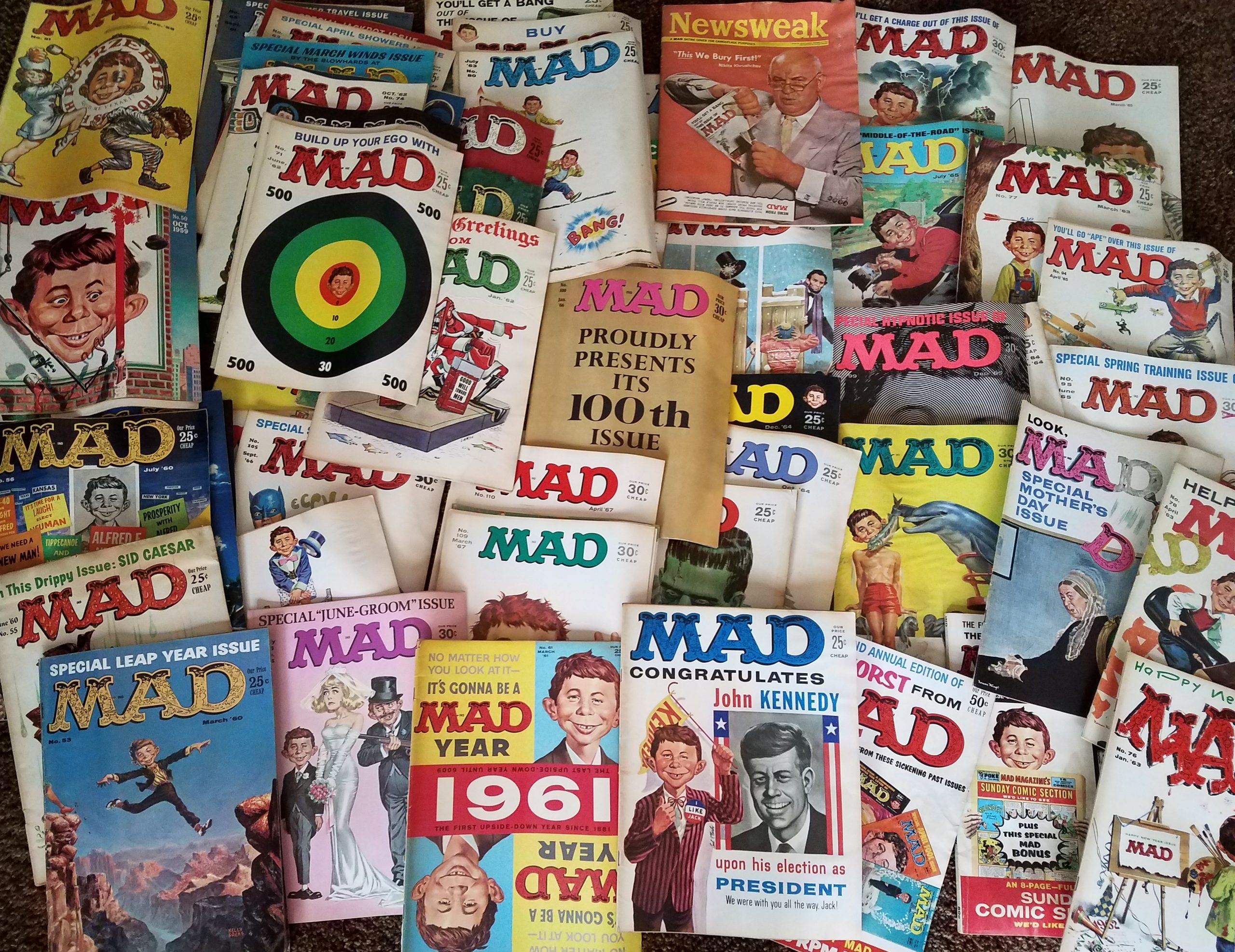 Just a sample of my Mad Magazine collection

It’s amazing that I managed to get this story written at all, because I made the mistake of starting to read all my old Mad Magazines. They were out in the garage, in a drawer of a file cabinet, and some of them had gotten a little scrunched, but luckily they didn’t get eaten by the termites that we had in the garage at one point, or soaked by the flood we had at another point.

It's amazing that I managed to get this story written at all, with so many old issues of Mad Magazine waiting to be re-read.

My parents must have boxed them all up and taken them along when they moved out of the house I grew up in and into a gated community for seniors after my father retired in 1978. I was living in California already, and they never asked me if I wanted to come back and claim any treasures before they moved. So I’m lucky they decided to save the Mads. I know they got rid of my brother-in-law’s Playboys that he had left there for safekeeping. And they also gave away my complete collection of Nancy Drew books, that I hoped to share with my daughters if I ever had any. I would love to know how they decided what to keep and what to toss.

About ten years later they asked my sisters and me if anyone wanted the family piano. I was the only one who did. They hired a moving company to transport it from New Jersey to Sacramento, and it was going to cost the same amount whether they just sent the piano or sent other things as well. So they threw in all my bedroom furniture except the bed – two dressers, a night table, and a desk and chair, all in matching Scandinavian teak – as well as numerous boxes containing my college books, notebooks, graded papers, student oboe, high school diploma, some other memorabilia . . . and the collection of Mad Magazines. I have to admit that, with the exception of the oboe, which I played for a while until I bought a new and much better one, I never paid attention to anything in those boxes. So this week, when I pulled out all the Mad Magazines because of this prompt, it was the first time I had looked at them in easily thirty years.

Once I went through and sorted them by year, I had a lot of questions. The first issue in my collection is August ’57. I can’t believe I was reading it then, I turned six years old that month. Maybe it belonged to one of my older sisters, or even my parents. Looking at it now, I think all (or most) of the words used were in my vocabulary, so I could have read it, but I can’t imagine that I would have understood any of the satire. Therefore I can only conclude that either it belonged to someone else in the family, or I acquired it later when I was older. 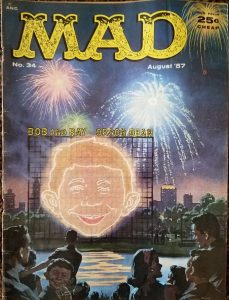 Is this a collector’s item?

That’s the only issue from ’57, and then I have a handful each from ’58, ’59, and ’60. There are two different issues that I have two copies of, for some reason. They must have been bought at the newsstand, perhaps by different people. That’s a mystery that may never be solved. However, starting in late 1960 I know I had my own subscription, and I have the complete set of magazines for the next six years, from 1961 through 1966.

In ’67, I have only the first three issues, so apparently that spring, which was my junior year in high school, I must have decided to let my subscription lapse. I wish I could remember why. Maybe I thought of it as a magazine for kids and therefore I had outgrown it. But in fact, the humor is much more sophisticated than I realized at the time. Here’s my last issue. As you can see, the price had gone up from “25¢ cheap” to “30¢ cheap.” Looking through my collection, I see that this enormous price jump happened in January ’65. (Actually, the January ’65 issue says 30¢, but the February issue says 25¢. Then from March on they all say 30¢.) There were some great articles in this issue – in fact I just spent another half hour reading it, which makes it even less likely I will get this story finished in time. 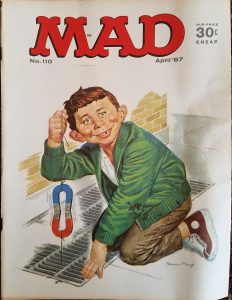 To subscribe to Mad, when you filled out the order form that you mailed in (because of course you could only do it by mail), there was a box to check if it was a gift subscription, and then a place to write who the gift was from. One year I wrote that it was a gift from Audrey Hepburn, who was my idol. Somehow I naively thought they would track her down and I would get a card that was really from her. Of course when I got the card it said this is a gift from Audrey Hepburn, but it wasn’t her signature at all, it was just written by some employee of the magazine. That was disappointing, but I still put it up on my bulletin board. I could only hope that my friends would see it and be jealous that I got a gift subscription from Audrey Hepburn!

Before I looked at any issues, or even knew I still had them, there were two covers that I vividly remembered. The first was on the Jan. ’61 issue. Like most magazines, Mad came out earlier than the cover date indicates. (In fact, Wikipedia says that issues came out 7-9 weeks before the start of the month listed on the cover.) So I would have gotten that issue in November 1960. When I unwrapped it, and saw that the cover said “Mad congratulates John Kennedy upon his election as President. We were with you all the way, Jack!” I wondered how they could have been so sure that he would win the election. Then I turned it over. The other side said the same thing about Richard Nixon. Half of the pages were printed with one side up, and the other half with the other side up. Here’s my best attempt to capture this cover. 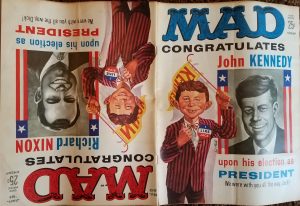 The second memorable cover, on the March 1961 issue (so it came out in January), pointed out that the numbers 1961 read the same upside down – sort of like a palindrome but flipping them on a horizontal axis instead of a vertical one. You could hold the magazine either way and the cover made sense. However, they didn’t attempt to do that with the content inside, which would have been pretty challenging to read. 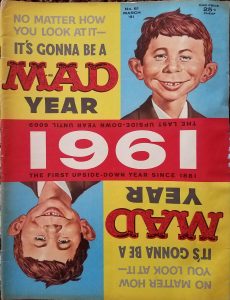 So other than the covers, which features did I remember from back in the day, without refreshing my recollection?

Spy vs Spy (with no period after the vs), about two characters just known as the Black Spy and the White Spy, who were identical except for the color of their outfits. It appeared twice in every issue. There were no words, it just showed in a series of drawings how one of the spies concocted an elaborate plot to trick or kill the other one. I haven’t gone back to check, but I suspect that the White Spy won once and the Black Spy won once in each issue.

Mad Fold-Ins, on the inside back cover of most issues. They showed a question with text and picture when you looked at the whole page, but then when you folded it in on the two lines marked A and B, it gave you the answer with a different picture and text. Here’s the Fold-In from my final issue. 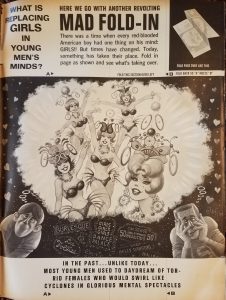 It may be hard to visualize when it is so small (although if you’re reading this on a computer, you can click on it and make it bigger), but if you look carefully at the text at the bottom, it says MO and CY on the left side above the A, and TOR- and CLES on the right side above the B, so when you fold it together it says MOTORCYCLES, and the picture of the girls turns into a picture of a motorcycle. I always folded gently when I looked at them, because I didn’t want to put creases in the magazine.

Drawn-Out Dramas, small images in the margins or in between panels. When I looked for them now, I had trouble seeing them unless I put on reading glasses. Definitely better for younger eyes! I also remembered (but couldn’t find) that in at least one issue instead of pictures they came up with funny married names for celebrities (which worked if you assumed the woman was going to add the man’s name to the end of hers). The only one of these that I can recall is “If Shirley Temple Black married Tyrone Power, she would be Shirley Temple Black Power.”

Movie Parodies were fun, because they were generally musicals, with new words to the familiar tunes that I enjoyed singing. The one that stuck with me all these years was the parody of The King and I, called The Producer and I, in which the sexy starlet decides to become a serious actress, and then comes back with shaggy hair and oversized clothes, only to find that they want sexy starlets again. To the tune of Hello, Young Lovers, she sings “I know how it feels to hear whistles and squeals just by walking right by any guy! But now on the street there’s no men at my feet, my dog gets more whistles than I.” I found it again this evening, and confirmed that I had remembered those lyrics correctly for 59 years!

Although I loved Mad, it was not the only magazine I was reading in those days. My father subscribed to several magazines to keep in the waiting room of his medical office, and the family generally got to read them first. (Did you ever wonder why all the magazines in your doctor’s or dentist’s waiting room are a few months old? That’s why.) Principally I remember Reader’s Digest, Life, and Look, all of which I read irregularly. In Reader’s Digest I mainly read all the amusing anecdotes sent in by readers, in sections with names like Life in These United States, Laughter is the Best Medicine, Humor in Uniform, and Was My Face Red. I also liked the My Most Unforgettable Character feature, and occasional other stories. And often at the end of a story there would be a joke or two. I don’t remember that much about Life and Look, I think I just looked at the pictures.

As an adult, I used to read Newsweek or Time back before we could get our news on the internet. The only magazines I subscribe to now are The New Yorker and Vanity Fair. I first subscribed to Vanity Fair in 2016 when Trump had a little tweet war with the magazine, and after that VF started using the tagline “The Magazine Trump Doesn’t Want You to Read.” So I did it as a protest, but then I found that it was a very enjoyable magazine. And another good thing about it is that it only comes once a month, so I can keep up with it, unlike The New Yorker which comes every week. In the New Yorker, I have to admit that I often only have time to read the cartoons and Shouts & Murmurs. So I’m getting the humorous aspect of it, sort of like a grown-up, more sophisticated version of Mad.

15 Responses to Mad About You