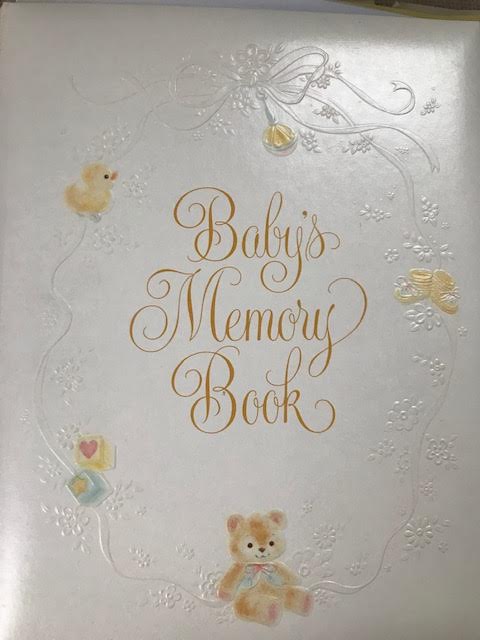 I had a somewhat tortured gynecological history (never regular periods, an ectoptic pregnancy in 1981, leaving me with one working Fallopian tube, followed nine months later, with the same IUD in place – the doctor never told me to remove it – by another pregnancy which Dan and I chose to abort for health reasons), so I had some difficulties becoming pregnant when we decided it was time. I was 32 years old and we had been married 11 years when David was born at 7:11pm on August 20, 1985 after a grueling 37 1/2 hour labor (he wasn’t breach, but “sunny-side up”, I had unproductive back labor for hours).

We didn’t know the sex before-hand, but were thrilled to welcome David (just an easy name to go with our challenging last name), Benjamin (for Dan’s grandmother Bessie, who died two weeks before I became pregnant). Jews don’t name for living relatives. According to legend, it might confuse the Angel of Death, who could  take the wrong person when she comes to claim her prey, if people have the same name; hence, no “Juniors” or “the second” in Jewish tradition.

I already had the “Baby Book” ready to go and began filling it in immediately with details from the birth, a first photo of David, his hospital bracelet, an original birth certificate (which I’ve removed and used when I need to). 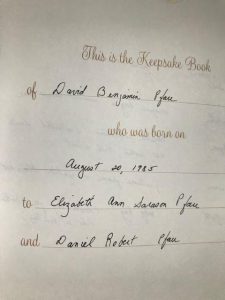 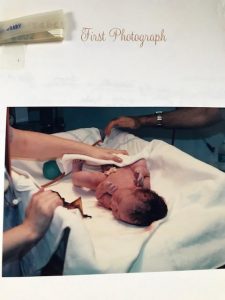 The book queried “The World As It Was” on the day he was born. I saved the front page from all the sections of The Boston Globe, so there were two car bombs that killed 29 in Moslem area of Beirut, Mayor Flynn tells BU ‘no’ on apartments. Senator Laxalt won’t run again despite Reagan request. Front office constructed a comeback for the Yankees; Sox swept under. Walton deal still in limbo (with the Celtics).

The book prompted me for all the milestones: first smile, roll over, sit up, first tooth, first word: bye bye, etc. I filled them all in. I included his Consecration Certificate from Temple, when he was no longer a baby. In the front, I have cards he made for me on Mother’s Day at Nursery School and all his immunization records, given when he outgrew his pediatrician. The book is bursting with information.

I found a fascinating piece of correspondence. David always had a mathematical mind (he went on to major in physics at Stanford, get a PhD in computational neuroscience from Columbia and now is a Senior Scientist at DeepMind in London, doing pure research in machine learning). In 6th grade math class, David made an interesting observation, that I can’t quite describe here, but he wrote out the equations for me (I have the original paper on my study wall). He had stumbled on Pythagorean triples and described them to his teacher and classmates. No matter what numbers he tried, the equation always worked. This was well beyond 6th grade math and the teacher was impressed. With David’s help, she wrote this up and sent the paper off to Mathematics Teaching in the Middle School. The editor was so excited with the paper that she skipped the usual rewrite cycle, as she was in a hurry to publish it, which she did. His teacher shared this with us, the head of the department and the Vice Principal of the middle school and asked if David wanted to skip to 8th grade math, as he was clearly bored with the current curriculum. I don’t remember that outcome, but I did share my son’s observations with one of my older Sarason cousins, Donald Sarason, a well-respected math professor at UC Berkeley, many years my senior. He wrote back that it was clear David had the mind of a mathematician and could he and his wife (who taught middle school math) correspond with David’s teacher. I have all the correspondence from 1998, including the original article, safely tucked away in the Baby Book.

I also kept a copy of his first pay check. During the summer of 2000, he worked as a stock boy at the local bookstore around the corner from our Edgartown home. During that first pay period, he earned $66.50, which he tucked into his savings account. One of the Harry Potter books was released that summer. The women who owned Bickerton & Ripley (long-gone now) opened at midnight, dressed up as wizards and let the kids of the neighborhood line up to get those precious books. Jeffrey was already asleep, but his big brother got him one. 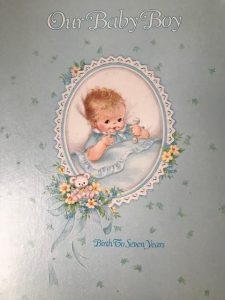 Three years later, I was pregnant again, also planned and it happened very easily. Today this would be called a “geriatric” pregnancy, as I was 36 when our second baby was delivered. I had amniocentesis and knew it would be boy. This book was a gift from Dan’s parents. 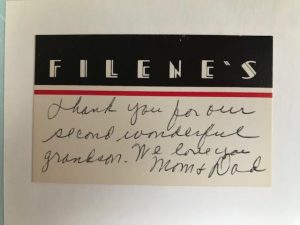 Jeffrey Bennett Pfau came quickly into the world. In fact, there was no time for anesthesia. He arrived 45 minutes after we got to the hospital. The name Jeffrey (like David) was just a name we liked (though it did get misspelled too often as Jeffery), Bennett was for my maternal grandmother Belle, long-gone. 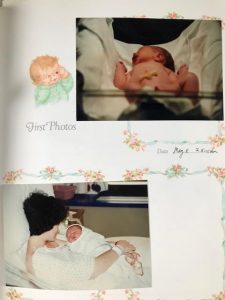 I put those first photos in his baby book along with a family tree that was prompted. 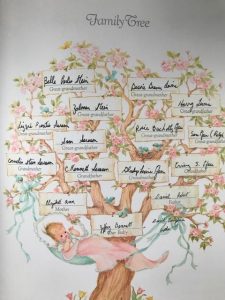 This gave his whole lineage. This was a new addition to the baby book.

This book didn’t prompt for as much information as David’s did (or perhaps I was too busy to fill in as much information). I saved the whole Boston Globe from the day he was born, so the big news stories that day were: Lender’s caution cools fever pitch of Boston development, Cold War over, says German, Panama casts votes for leader. Census to be taken of homeless in 1990. New wisdom on humble ankle sprain (by columnist Betsy Lehman – a sad note; she died at one of our best hospitals while undergoing treatment for breast cancer due to an incorrect dose of chemo – WAY too high, some years later). Red Sox’ homework pays off, 9-5 (over the Texas Rangers).

As with David, I have Consecration certificate, homemade Mother’s Day cards, his complete medical records from his pediatrician. His first word was “kitty cat”. He LOVED his cat.

Jeffrey held two part-time jobs in 2006 and I made copies of both first checks. One was at Vineyard.net. He has walked in cold, looking for a job from them that summer. They usually hired local kids and Jeffrey had no outside experience, but had been programming for his own amusement for years. On his resume, he put his SAT scores. He got 800 (perfect) on his math test. That impressed the owner enough to give Jeffrey some hours and Jeffrey didn’t disappoint. His first paycheck amounted to $146.29.

He also did an independent project for our friend Tony, who owned Edgartown Marine. Tony installed a webcam, which he wanted programmed so he could control it to scan the harbor. Jeffrey had to figure out how to program the camera. It was not a simple task. His paycheck was $312. (I believe that was one installment.) This was a significant job and we believe it impressed one of the gurus of the Computer Science Department at Brown University and helped him gain admittance.

Jeffrey took 4 1/2 years to graduate from Brown, which was fine with us. They did a nice ceremony in December, 2011, but not cap and gown or diploma. He had to come back the following May for that (which he did, though he had already moved to California and was working for Apple, but I got my cap and gown photos). The very first document in his baby book is: 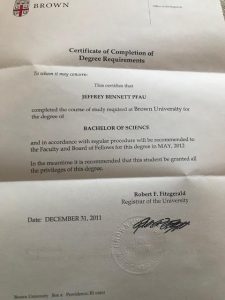 The letter declaring that Jeffrey had completed all the requirements and was a college graduate. He needed this to get a discount on a car loan (new grads got one), get his first apartment, and all sorts of other things. It was a precious document before his diploma came through several months later. I cherish it.