This is a Developing Story by Tom Steenburg
25
(37 Stories)

Prompted By Vacation or Staycation from Hell
13 comments. 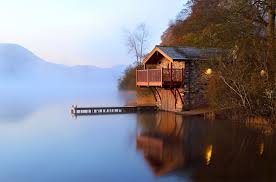 Reader’s note: This story has nothing to do with Covid-19.  Nor hell.  But it does relate to vacation.  Two of them in fact.  And it does contain song references, Suzy.

But if one was the picture-perfect-postcard of a vacation the other was the photographic negative from which it was printed.

This is the story of two vacations, three years apart.  “It was the best of times it was the worst of times.”  An exaggeration and plagiarism (sorry Chuck).  But if one was the picture-perfect-postcard of a vacation the other was the photographic negative from which it was printed.

Nancy and I were lake and mountain people.  I still am.  Early in our marriage Lake Winnipesaukee was a favored vacation destination. (See “O Say Can You See?” – Fireworks prompt).  That year we planned our first post-honeymoon vacation and, not surprisingly, rented a cottage on Moultonborough Neck on Winnipesaukee.  The first Saturday of August we packed our VW Beetle to the gills*, strapped the Sunfish we borrowed from her parents on top and took off from Connecticut.  I suspect the laden vehicle looked like an ant carrying a full-size potato chip.

Driving carefully, the car was a tad unstable due to the Sunfish, we made our way north.  Our check-in time was 2pm, but we arrived early, around 12:30.  We stopped in Meredith, where the realtor’s office was, and discovered that a restaurant/diner that Nancy remembered from her youth was still in operation.  We stopped in and had lunch, including their renowned milkshakes.  And they were “milkshakes” the way most of the country knows them, with ice cream. They weren’t sissified “frappes” as they are called in much of New England.  This was New Hampshah fer Crissakes.

After lunch we picked up our key and headed toward Moultonborough Neck.  It was a beautiful day.  We stopped in Center Harbor to buy groceries and continued down the Neck until we reached our cottage.  Calling it “humble” was certainly no overstatement, but it was fine.  We settled in.  The next day, Sunday, dawned sunny, warm and humid, but being at the lake, that was just fine.  That evening we had a brief thunderstorm, which cleared the air.  Monday was bright, blue and breezy.  We had a grand time sailing.  And thus began a string of almost uninterrupted beautiful days.  Mornings as we made breakfast and got the day going we listened to the radio.  It was a top 40-type station with periodic newscasts, useful because this was the week that culminated with Nixon’s resignation.  Their playlist was of a length that during the two weeks we heard the same songs a number of times.  One, which we particularly liked, “Please Come to Boston” (Dave Loggins, right Suzy?) became our favorite and later a touchstone to this vacation.

Over the course of the two weeks we swam and hiked and ate.  And ate.  Having the constitutions and metabolisms of twenty-somethings coupled with abundant exercise made it possible.  We took some side trips, including one to Wolfeboro on the lake to our north.  Wolfeboro had a locally renowned bakery, the Yum Yum Shop, that featured, in August, a pie made with wild blueberries.  Beyond compare.

Of course, into each life some rain must fall, and the first Friday we had rain.  But we needed to do laundry anyway.  And there was much to read about in the news – this was the day Nixon resigned.  The rest of the vacation unrolled.  The only downer was that we discovered that the Sunfish had developed a crack in the hull and was unusable in the second week.  But truth be told, toward the end of the second week it all seemed a bit like too much of a good thing. 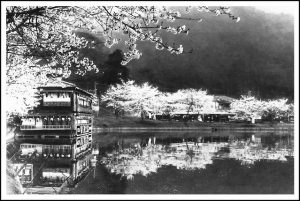 Same first two weeks in August and same cottage.  Everything else much different.  Over the two weeks there were two bright sunny days, the Tuesday of each week.  We had a couple days of rain.  But much of the time the prevailing condition was a strange admixture of haze, mist, humidity and just-not-very-nicedness.  We still swam but there were no real tanning opportunities.  We went to Wolfeboro.  And we read.  And read and read.  One other big difference from our earlier sojourn: we had a dog, Stitch, a yellow Lab.  Retrievers gotta retrieve, and on the good days we threw a canvas training dummy off the dock for Stitch to retrieve.  He never grew tired of it.  On the second nice Tuesday we went for a long hike that was quite an adventure.  We decided to try Mt. Tripyramid.  Now, “mountains” in the northeast would be laughed at elsewhere** but it was between 3 and 4 thousand feet in elevation, typical for the region.  We discovered when we reached the top that there was, unfathomably, no real view.  I guess that was consistent with the overall tenor of this trip.  But Stitch had a great time.  The trail was about 11 miles round trip.  Stitch, off lead, darted and dove all over.  Shortly after we started our descent he disappeared.  We weren’t sure what to do but decided it best to keep going, calling to him all the while.  When we were about halfway down he suddenly appeared, running up the trail toward us.  We reached our car at the trailhead and another hiker approached.  She said she was glad to see us with Stitch.  Turns out he must have thought we were ahead of him and he ran all the way to the trailhead and then turned around and ran back up until we met him.  Must have done eighteen miles in total .  One tired puppy dog, who just stretched out in the back of our Toyota Corolla wagon and slept the rest of the day.

Oh yeah.  That year’s song was Carly Simon, “You’re So Vain.”  I wonder now why, at the time, Nancy and I didn’t create parodies appropriate to those two weeks, e.g. “So Much Rain” and “Down the Drain.” All in all, these two weeks were not at all like 1974. But a vacation is a vacation.

We now return you to your regularly scheduled Covid-19 programming.

** Years later, different circumstance (and different wife).  Returning to our home in the Adirondacks from a vacation in the Low Country of South Carolina we stopped for gas in New Jersey.  At the time (and I think it’s still true) New Jersey did not permit drivers to pump their own gas, so all stations were “full serve”.   I chatted with the attendant filling our tank, who was clearly not native-born, and mentioned that we were headed from coastal South Carolina to our home in the mountains in the Adirondacks.  He looked surprised and asked, “are there mountains in New York?”  I said yes, and asked him where he was from.  “Nepal.”  I revised my answer.

13 Responses to This is a Developing Story

COVID-19 and the Cursed Princess
by Marian