Who Took the First Breath? Does Nine Minutes Matter? by Mister Ed
10
(12 Stories) 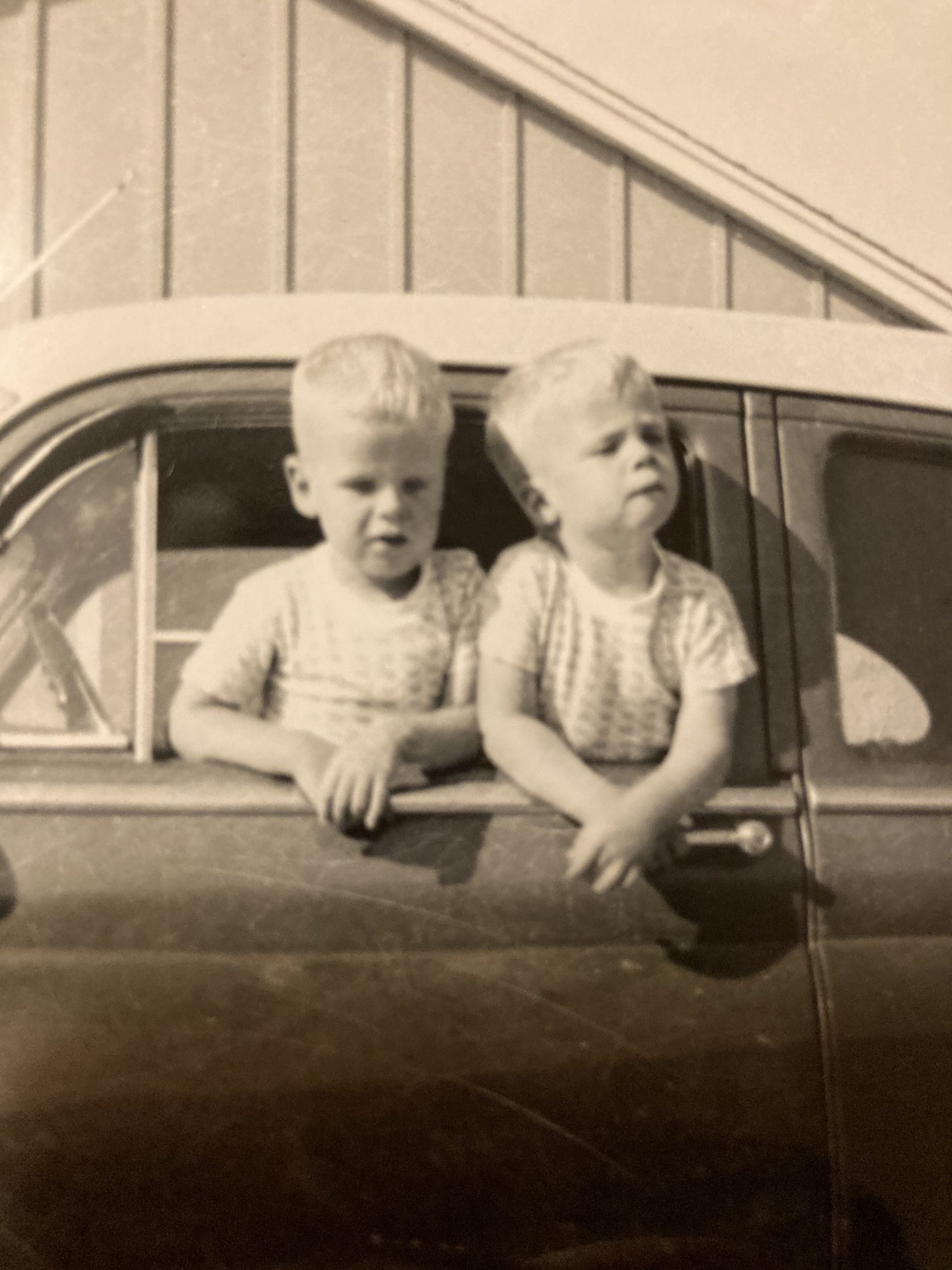 I am the second born of a set of identical twins. Does our birth order – he (Twin A) older, I (Twin B) younger – make a difference? Did it ever? If I recall, it made a difference with Cain and Abel. And my father always said that the ancient Romans considered the second born to have been conceived first. (Searching quickly on the internet, I couldn’t find support for this assertion. Whatever is true about ancient Rome, in today’s America, there are no primogeniture legal consequences burdening us.) Twin A inherited no more of my father’s small estate than I did. Nor did he get a favored status or treatment in the family.

So maybe this is a story about twins, and not about birth order. And neither of us was first, as we had a brother two years older. He didn’t seem to care who was older; collectively, he referred to and summoned us by calling out, “Twins!”  My mother called us the split egg. Since our parents expected a single baby (my mother hoping for a girl), we remained nameless for several days – Just Twin A and Twin B.

Although younger, I was larger and stronger from the start. My four pounds 8 ounces gave me an advantage over his four pounds two. It made a difference, as more than once, the hospital called my parents to come in and look at Twin A, struggling in his decrepit government-issue incubator, saying it didn’t appear likely that he’d make it through the night. They weren’t worried about me, and ultimately, need not have worried about him. But he reasoned that since he was older, it was okay that I was bigger and stronger.

We were mirror-image babies. Put one next to you and look at the other in the mirror, and you couldn’t tell the difference. I have always been grateful that our parents made a point to treat us as individuals. No cute twinsy names. The clothing was always different, although similar. We even parlayed their philosophy into demanding and getting separate birthday cakes. Mine had blue frosting; his had green. I’m sure the food coloring had no effect whatsoever on the taste of the cake.

Our father was in the military when we were born, and then with an aerospace contractor, so we moved around a lot. No matter what new school we entered, we always knew one other student, and delighted in that fact. And I always knew at some point the formerly smartest kid in the class would understand that his lofty perch had been replaced by Twin A. (No doubt the smartest kid in the class was actually a girl, but in those days, any really smart girl was loath to allow anyone else in the class to know it.)

So … what about competition between the twins, or, consistent with this week’s Retrospect prompt, what about competition between the younger and older? The fact is, we were competitive. But I think it was a general competitive nature, and not a competition is-a-vis each other. In fact, we avoided head to head competition. We played different instruments in the band. We insisted on being placed in different classes where that was possible. We attended different math/science based summer programs (San Diego State and the University of Notre Dame). And we made sure to apply to different colleges. Moreover, we did our best to help the other succeed. I recall Twin A Xeroxing and sending an announcement of a “California Graduate Fellowship” program which he’d seen posted on a wall at UC Santa Cruz where he was attending. His keen eyes led me to apply, and it ultimately paid my law school tuition. I identified with the Bryan brothers twins, who became the best tennis doubles team in the world, and I was pleased to learn that they never competed against each other in a tournament. Ultimately, only one played professional singles, thereby earning significantly more prize money than his brother. Remarkably, however, they pooled all the winnings, from their joint doubles triumphs, and the singles winnings of one brother, and split them 50-50.

Our aversion to direct competition and the comparisons that would inevitably follow did not prevent the competition from happening. In Retrospect (pun intended) I wonder now whether some of our teachers set us up to compete. We spent one year (6th grade) in San Luis Obispo, and there were two sixth grade classes. Our respective teachers appointed each of us to be editors of our classroom newspapers. At my teacher’s suggestion, we named ours High Tides. Subtly outdoing us, Twin A named his paper Low Waves. Both papers were reproduced on those wonderfully smelling (and undoubtedly toxic) purple-ink ditto pages. There were no typists in my class, and the only typewriter we had available had no characters on the keys, making hunt-and-peck typing very difficult and incredibly slow. So our first edition was hand-printed. The other class had a couple of typists, and theirs looked much better as a result. Our next edition was typewritten, too, as I decided we weren’t going to be outdone. I learned to type in the intervening month. It was fun to push down the key and peer at the tiny letter that appeared at the end of it. So I think the competition was forced upon us, and I think I wasn’t competing against my twin; I would like to think I was competing with my team of writers against the other class.

And although we were talented academically, the drive to be good was not to be better than the other twin. Nevertheless … I ended up valedictorian and Twin A was the salutatorian, by virtue of receiving a single B in his freshman year. It was very close. I got a B that year, too, but it was a quarter, and not a semester grade, so it didn’t factor into overall GPA. We both agreed both B’s were undeserved. I got mine from a teacher trying to make a point – I wasn’t as smart as I thought I was (probably true, but I still deserved an A); twin A’s B was in French from a teacher who really couldn’t speak French at the time, and for some reason thought only one of us was going to get an A.

Notwithstanding our close, but distinguishable class rank, I was a National Merit “Commended Student”; my brother was a Semi-Finalist. The difference was one point; I still remember discussing a question he got and I didn’t, forgetting that volumes are cubic dimensions – he remembered. I blamed my slow thinking on a late night with my girlfriend. He got a good night’s rest. He also got the free flight to Michigan State to be wooed to attend their National Merit Scholars Program. (He didn’t go). Perhaps I would have; I suspect it would have been a mistake. And his SAT scores were higher. Now I think, “so what.” But … I think it rankled a bit. Did it rankle because it was he with the higher score? Or simply because mine could have been higher regardless of his score? I don’t know. Our college counselor asked me, “What happened?” I didn’t fill her in on my girlfriend.

So there were lots of similarities, but some significant differences, and for me, a recognition that it’s okay.  Twin A had a well-defined (I would say inflexible) moral code. He worried more about the consequences of one’s actions. I would define mine as more nuanced. So, naturally, I became a lawyer and he the computer scientist. He, not I, came up with the question about whether the B-36 crews (including my father’s) who knew they were headed to the North American Coast an hour and a half early had a moral obligation to disobey orders and break radio silence at a risk to their careers to warn other crews that they might be in danger. (See Close Analysis of a Close Call.) That thought didn’t occur to me, until we were discussing it 40 years after I first heard the story. In another 40-years-later discussion, we discussed why I took advantage of my father’s instructor’s copy of the trigonometry textbook that he used in teaching first year courses at Cal Poly and we coincidentally used in high school. The student version had the answers to the odd-numbered homework questions in the back; the instructor’s had both the odd and even. Twin A refused to look at the answers in the teacher’s book. I did, because if I didn’t get the answer right, I wanted to know then why it wasn’t. Sometimes it would take me another half hour to work the problem through to the correct solution, but as I explained, I thought it was a better way to learn the course. I don’t think he would have agreed with me in 1968, but forty years later, he agreed, with a short, “Oh, that makes sense.”

Nevertheless, differences like this earned me the “Evil Twin” moniker. I didn’t (and don’t) mind.

We both assisted and significantly influenced each other’s development, for the better. Our proximity of births made an enormous impact. Which of us came into the world nine minutes before the other did not, in my view, make a difference.

5 Responses to Who Took the First Breath? Does Nine Minutes Matter?