Prompted By Get Organized
8 comments. 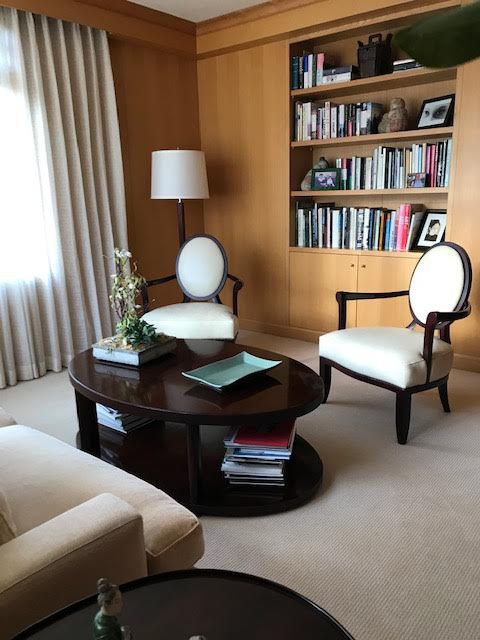 I am a born organizer and record-keeper. That is just who I am. My degree is in Theatre Arts and I wanted to be an actress, but learned over my four years of college that I was more adept at being a stage manager, writing down all the cues, running the show while in production. The most elaborate show I stage managed was “Lenny” which had over 200 called cues during the run (long before the fancy electronic light boards and set elements available today). I am convinced I was awarded my degree with departmental honors due to the difficulty and success of that show, which went from Brandeis to a professional local theater, but without me, because I was not a member of Actor’s Equity, the professional trade union. The director did show up at my first apartment, shortly after I was married, to get my “book”, the marked up script with all my notes and cues in it. I was heartbroken that I was not hired to go with my “book”.

I have always been a record taker. Before I went off to college, my dear Aunt Pauline, Dad’s oldest sister, gave me a beautiful leather-bound appointment book. I found that I didn’t put appointments in it, but recorded events after-the-fact, so it became a record of my life. Not really a diary, since there is no commentary, just an organized record of what I did each day (if there was anything of note to record). And I have kept up the practice to this day, so except for missing 1988, when my purse with the “At-A-Glance” calendar inside, was stolen in December and I couldn’t recreate it, I have a record of the last roughly 49 years of my life. A great memory aid when I’m writing these stories.

Though you couldn’t tell it from my study, which always has stacks of papers and folders everywhere, I like things tidy, as you can see from the photos of my home. The Featured photo is what we call the “Beautiful Useless Room”. It used to be the den, but during a massive renovation of the house, done from 2001-2002, we turned the porch off the kitchen into the den with the big flat screen TV and the computer (which can make it difficult for me to read or write when Dan is watching TV), and were going to turn that front room into a “library”, but we pushed the wall back, then discovered we didn’t have as much space for shelving, as you can see, so Vicki said we couldn’t call it a library with so few books. It is a sophisticated space and I keep the catalogs from all the shows from the Rose Art Museum under the coffee table. Occasionally, I will sit there and read. It gets wonderful light in the morning. 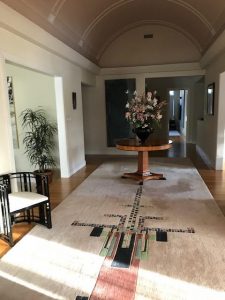 The foyer has a high vaulted ceiling. This was architect Patrick Ahearn’s idea when we first bought the house, 33 years ago. The kids used to pretend the rug was an airport runway and play on it, but toys were always put away at night. 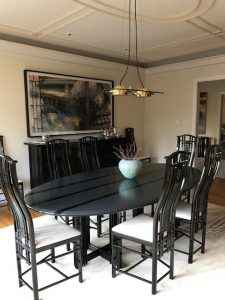 The dining room, off the foyer (just behind that front room, and across from the living room, with a baby grand piano, where my chorus will sometime hold soprano sectionals) was the site of brunches after both children’s b’nai mitvot for all my out-of-town relatives. I held my mother-in-laws 65th birthday here, and throughout the house. Even a friend’s daughter’s bat mitvah party took place here; adults upstairs (with a professional on the piano) and kids eating and entertained downstairs in our large finished basement. Caterers in the kitchen, just off the dining room. Shiva for her brother here too. My house is large and good for entertaining, but I clean it up immediately after. 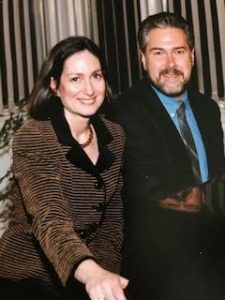 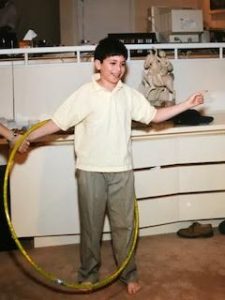 Downstairs at the kids party

As each guest left after Christmas, just days ago, their sheets and towels were immediately washed by me (no waiting for the cleaning lady), beds were made, towels neatly folded and rehung; one couldn’t tell I’d had a house full of guests in every bedroom just days before.

My study and my office desk, when I worked, are something else entirely. I have piles stacked everywhere. One pile for the Rose Art Museum. One pile for Brandeis reunion work, one pile to be filed, one stack from film festivals, one for health insurance, and so on. I used to say you could tell my mental state by the tidiness of my office. Every once in a while, I will take the time and go through everything and de-clutter. That feels great. I did such a project before my company came for Christmas recently and I don’t want the place to look too awful. It is amazing what I find and how long I’ve held onto some scribbles on little pieces of paper that were transferred to my iPhone long ago. Big piles have been tossed. That always feels satisfying, but there is more work to do when I can find the time. More fun to read the newspaper, write these stories and watch “The Great British Bake-Off”. We have become addicted, though not inspired to actually try and bake!

I try to go through closets too. Is this too big, too small, out of style, haven’t worn it in several years? It gets moved to a back closet and will eventually be given to Goodwill, unless the outfit has real sentimental value. I wore it to my brother’s wedding, my rehearsal dinner; something like that. Those items are stored in a locker in my basement. Some I can still fit into, but the 20″ waist is gone forever. Having children will do that to you.

I live my life in an organized fashion. Some might call me compulsive (my husband, for example, though he also chides me for the state of my study…until he wants some document that he knows I’ve saved and know exactly where it is). He had me in tizzy a few years ago when he asked for the folder on my car. I, of course, know exactly where I keep it, but it wasn’t there. I looked through all my files several times. Nothing. Couldn’t find it ANYWHERE. That isn’t like me at all. He was aggravated with me. Finally, I found that he had put it in a stacked tray on HIS desk (definitely did NOT belong there)! Of course he did not apologize, but at least I knew that I wasn’t going crazy, so there was some relief in that.

And all of you who have read my stories for years know that I love my photos and spent a whole President’s Day weekend about 37 years ago getting them out of shoe boxes and organizing them into photo albums, which I kept up until the iPhone came along and I stopped printing them. Friends tell me to put them in books, but I love having them at my fingertips (though I don’t have them in albums on my phone; I must learn how to do that so I can access them more easily).

I find staying organized is a key to a happy, well-regulated life for me.

Getting Organized, or… How I Joined the Wobblies
by Charles Degelman
A Moving Poem
by January Handl

To Be or Not To Be
by Barbara Buckles