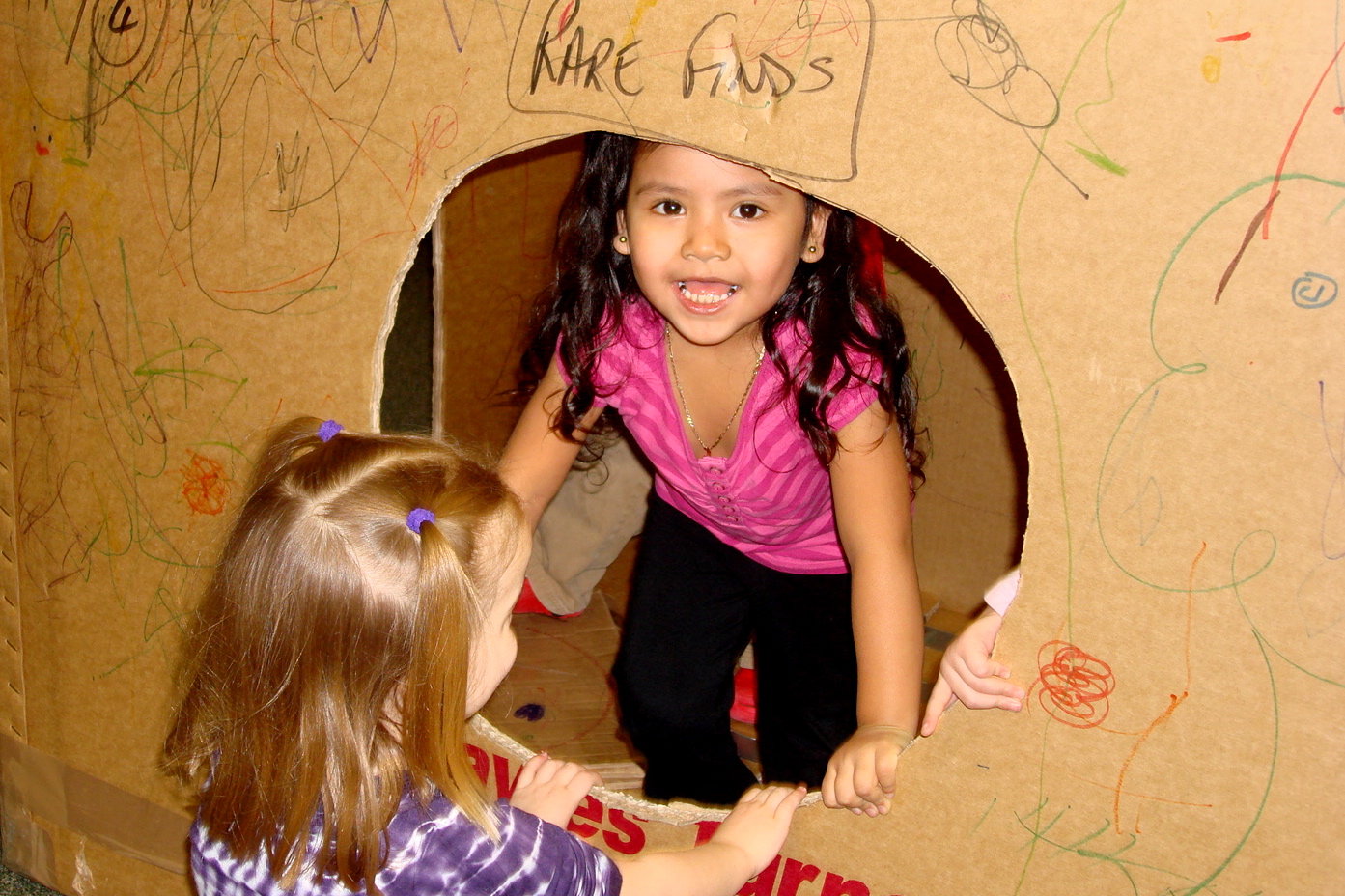 Working with young children can be a stressful and sometimes thankless job. Preschoolers need constant attention, love, guidance, and empathy. Early childhood educators often find relief through the funny and endearing things their young charges do and say. Sharing these stories, often at our lunch break, gave us the energy to go back into the fray. Sometimes, you just have to laugh.

Early childhood educators often find relief through the funny and endearing things their young charges do and say. Sometimes, you just have to laugh.

Reminiscing with several dear colleagues/friends last week, we recalled the infamous baby cooking incident. Usually what we called back in the day the “housekeeping corner” was occupied by the girls dressing up, cooking meals, and caring for the babies. But occasionally, the boys would invade and occupy the space, which we all viewed as a good thing. That is, until we realized the appeal was that they were cooking the baby dolls on the pretend stove top and putting them in the play oven. One of the boys in this class had just had a sibling born, and I imagine many of the kids of either gender who had younger sibs would have enjoyed this activity. 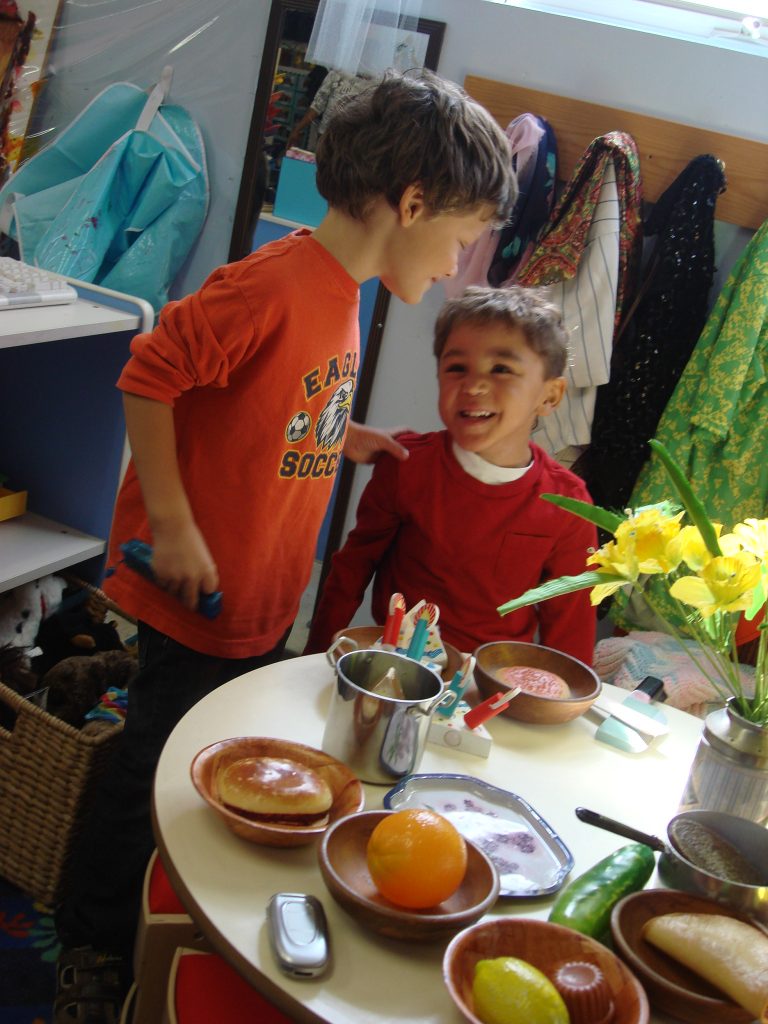 During practice for the holiday concert for parents in one of our classes for four-year-olds, the teachers heard a faint jingling sound when their charges started to jump during a song. After much searching for the source, a boy confessed he had stuffed a jingle bell into his nose. “Why would you do that?” asked a teacher. “Because he told me to,” was the reply as he pointed to a friend. His mother took him to the pediatrician, who actually had an implement to remove such objects. Who knew? 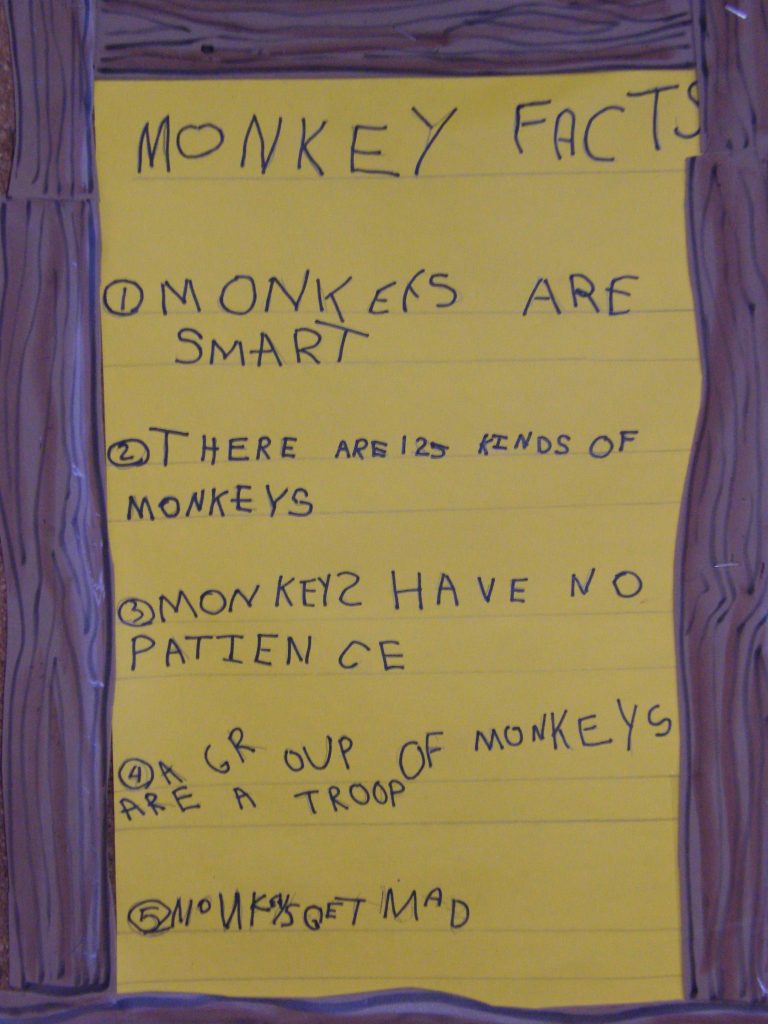 What the children learned about monkeys

Another favorite involved the fire alarm when I was director of the church-housed preschool. The pull box was mounted in the hallway low enough for a child to reach, and sure enough a very curious little boy pulled it. The result was total pandemonium. Despite our pleas that it be located elsewhere, the siren for the new alarm system was placed in one of the classrooms. There are kids from that class, who are now parents, who recall the deafening noise as one of the traumas of their childhood. We struggled to get the hysterical preschoolers out of the building. So far, not very funny. But when the perpetrator’s father came to pick him up at the end of the day, he excitedly told Dad what he had done and, you guessed it, pulled it again to demonstrate. 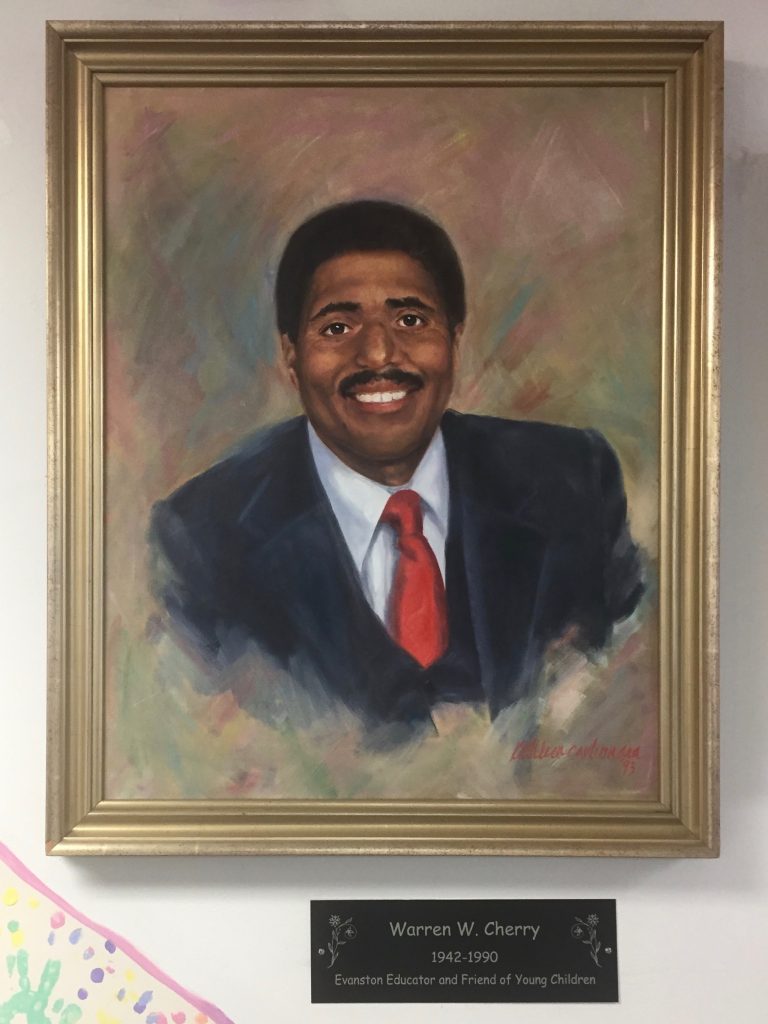 At our new preschool every fall, even after I had retired, I visited classrooms to show the children the portrait of Warren Cherry, for whom our school was named, and share the story of my mentor. This painting hung in the front hall of the school, so the children saw it every day. I usually started by asking if anyone knew who this man was. Their guesses often made it hard for me to continue while stifling my laughter: Michael Jordan, Martin Luther King, and later Barack Obama were understandable. But George Bush, a king, or the Mayor of Evanston? 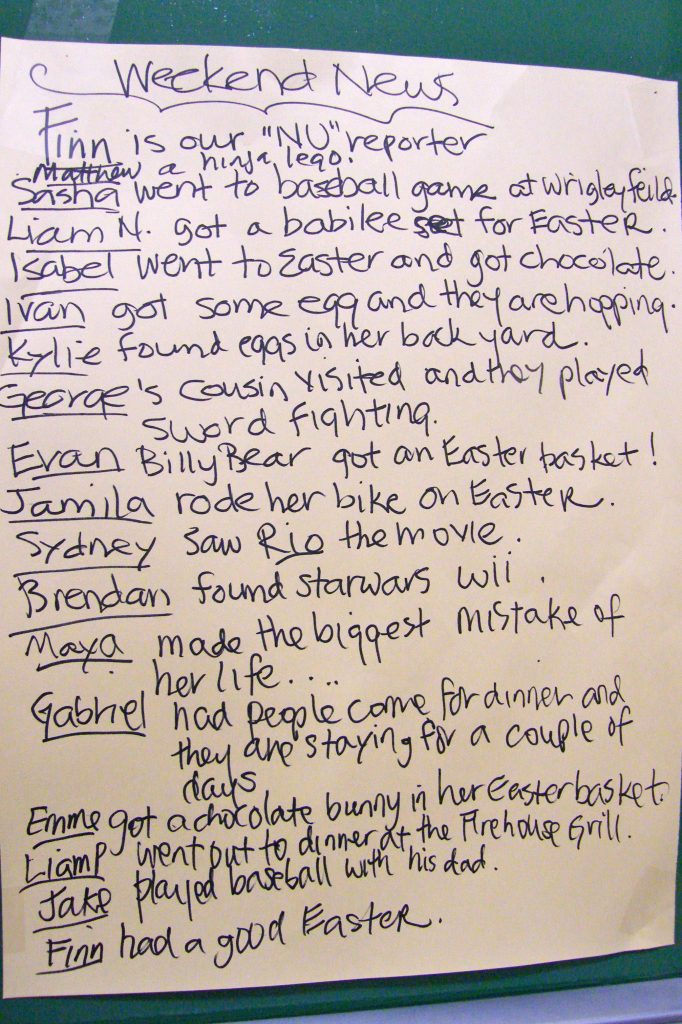 We always got a chuckle over the weekend news that one of the pre-kindergarten classes posted every Monday. Having had my granddaughter in this classroom, I knew that what she offered was often a fabrication, so I got a real laugh out of this edition in which Maya reported she, “made the biggest mistake of her life.” At age four, I can’t imagine what that would have been. I wonder if she remembers?

Although there were many more outrageous stories that were comic relief for the staff, there was an entire category of kids dropping F-bombs, dating all of the way back to my first teaching days in 1984. At the time, I had the three-year-old son of a good friend in my class. He was the youngest of four children and very adept at dropping “mother-F*!#ing” into conversations. After repeated warnings in my most patient teacherly voice, I called his mother and after a good laugh with her, the problem was solved. Another colleague remembered asking her class to make suggestions for classroom rules. A child piped up, “Don’t say bad words like f*!#.” Another time, a child took his shirt off and put on a cape to play super hero and then complained he was cold. The teacher suggested he put his shirt back on and he replied, “Why don’t you close the f*!#ing window instead!” Another time, a child was walking around the playhouse area repeating the F-word over and over and when asked if he knew what that meant he said,“It means I can’t find my keys.” 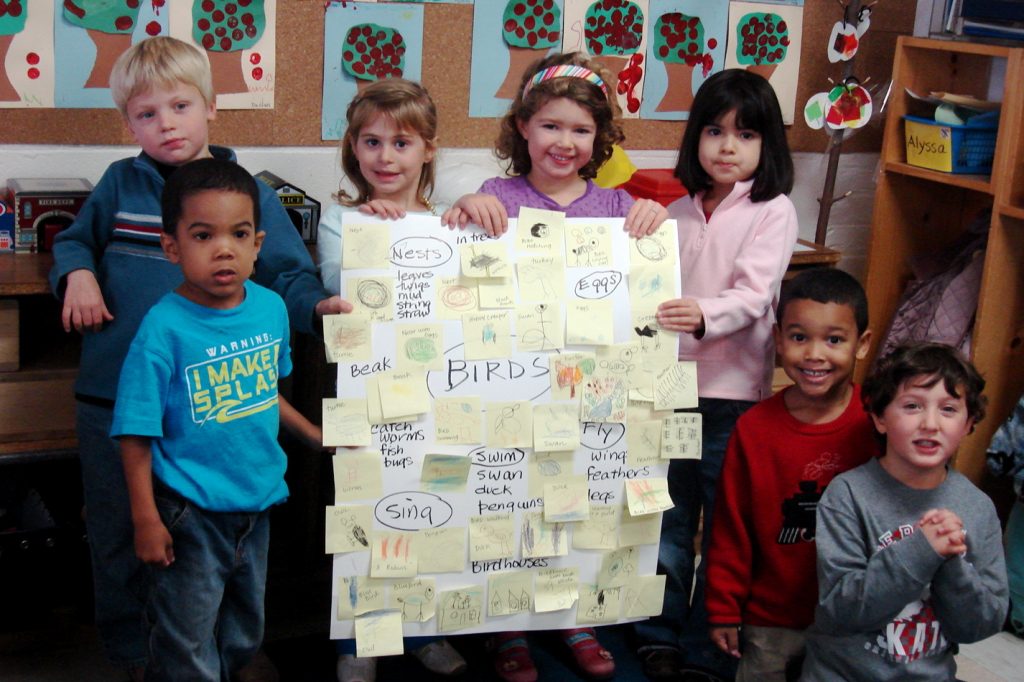 I loved working with young children and will always treasure the moments of comic relief I shared with my colleagues. Art Linkletter was right. Kids do say (and do) the darndest things. 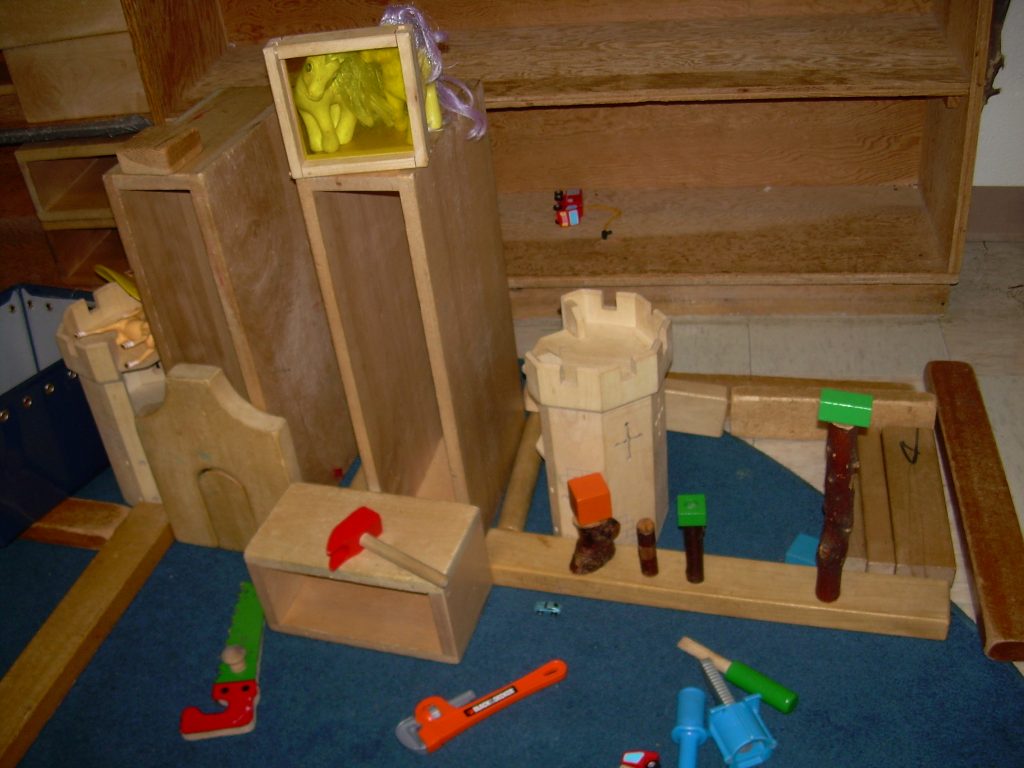 16 Responses to From the Mouths of Babes