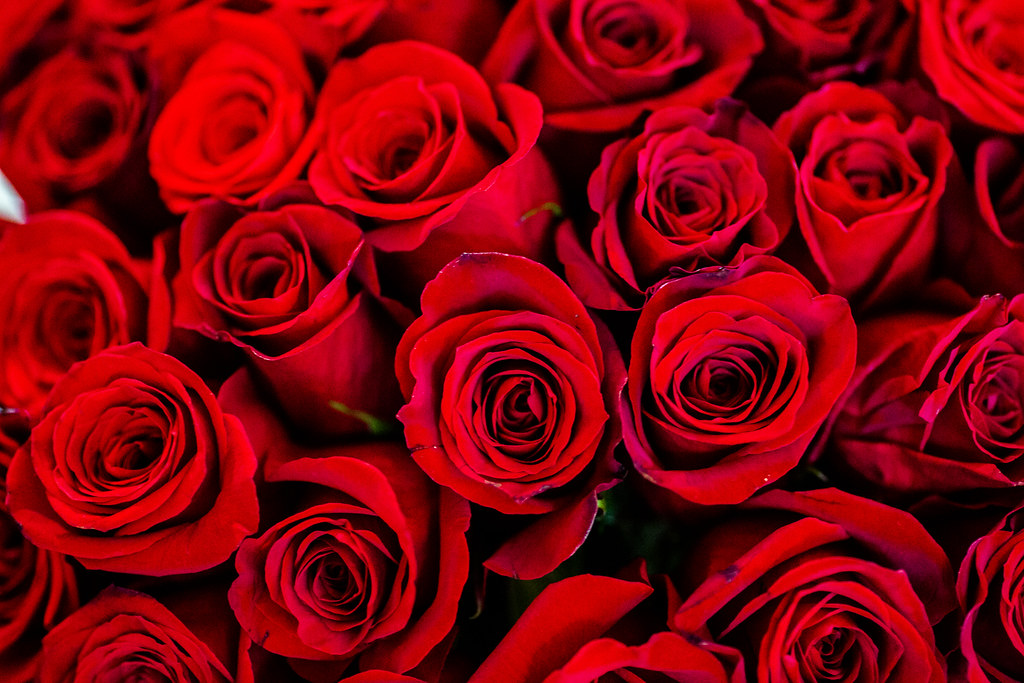 Funerals were forbidden when I was growing up. They were mysterious events my parents attended with other adults. My first introduction to this final rite of passage was my grandfather Philip Krut’s funeral on May 2, 1972. I was 26 years old and the mother of a one-year-old. Did I attend alone? Were my husband and baby son with me? I don’t remember. Sadly, I only have one memory from that funeral. My mother insisted I view her father’s body “out of respect,” and that is the first image I have of him when I think of my beloved grandfather to this day.

Seven months later, my father-in-law, Albert Levy, died at age 57 from a heart attack. I remember the shock and anguish. I remember having to manage the Shiva clean up while looking after a toddler. What I don’t remember, what my husband and his siblings don’t remember, is the actual funeral. I’m sure we hired a random rabbi and recited the standard prayers. I’m sure he gave some sort of eulogy based on meeting briefly with a shell-shocked family. I’m sure he said Albert loved his family above all. Whatever he said, none of us found it comforting.

After those experiences, I was adult enough to go to funerals … too many funerals. And what they all had in common was a lack of remembering and celebrating who the person really was. Most often, only the clergy spoke about the deceased. While attending the funeral for a close friend’s mother, someone I actually knew pretty well, the rabbi launched into the traditional remarks for the death of a mother and grandmother from Proverbs 31:

Who can find a virtuous woman? For her price is far above rubies.
The heart of her husband doth safely trust in her, so that he shall have no need of spoil.
She will do him good and not evil all the days of her life…

Blah, blah, blah. The good wife and mother. I’m sure she was, but she was also a unique person. That never came through. No one from the family was encouraged to deliver a eulogy. Rather than feeling like I was there to celebrate her life, I felt sad and bored.

When my mother-in-law, Lillian Levy, died on March 18, 2010, her family agreed that her funeral would be meaningful and celebrate who she was. We selected an officiant who encouraged family members to deliver their own eulogies. Her children spoke as well as one of her grandchildren. My contribution was to create a photo collage of her life and to add small framed pictures of her at various stages of her long life, which family members took after the service. We knew she would have liked flowers, even though they are not part of Jewish tradition, so we placed a spray of roses on her casket. When we buried her, every child and grandchild put a rose on her coffin before shoveling three scoops of dirt into the grave. We cried and hugged one another. She would have loved her funeral.

Two years later, my father, Sidney Levine, died on July 5, 2012. Planning his funeral was more challenging as we were dealing with conservative Jewish traditions in Detroit, but my mother’s wishes prevailed. She wanted it to be personal like my mother-in-law’s service. She wanted his children to deliver eulogies. She wanted photos of him. She even wanted the spray of roses. No one was going to impose religious customs on a grieving 89-year-old widow. So, we celebrated my father’s life with a funeral service that combined tradition with personal touches, and my mother was pleased. 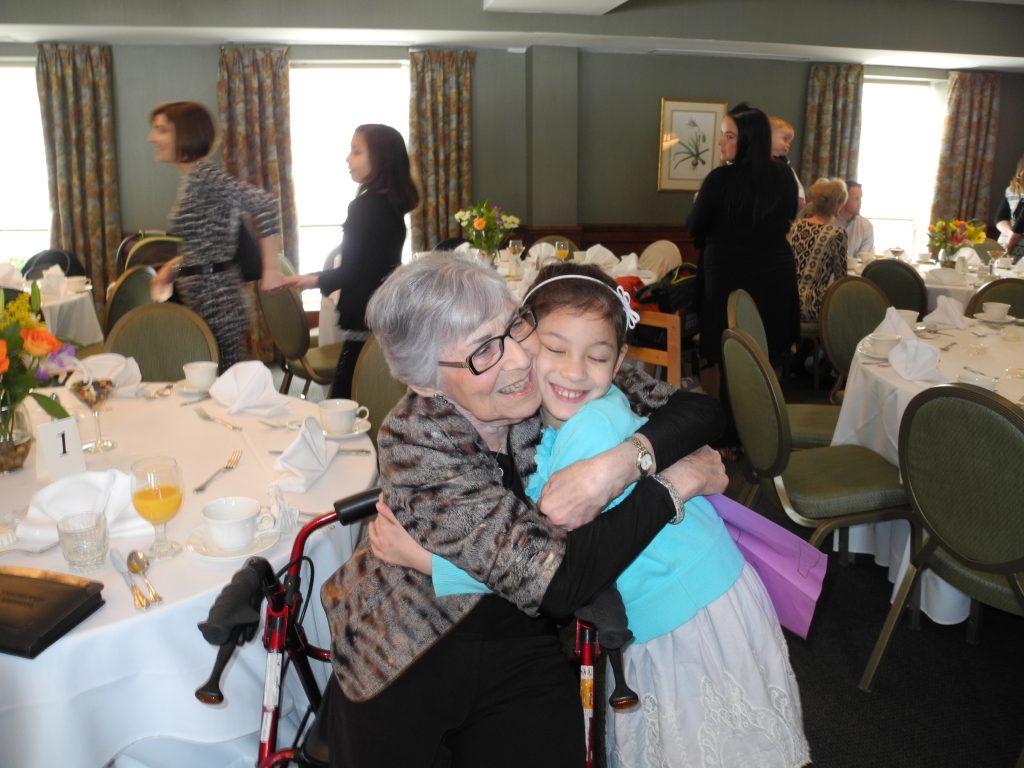 Maya hugging her great grandmother a month before Bubbe’s funeral

When Mom died on April 19, 2015, we knew exactly what she wanted. As her death was unexpected (as unexpected as it could be for someone who was 91), my brothers and I rushed to write eulogies for her. The photos were no problem because her home was filled with framed pictures of her parents, her life with our father, us as children, wedding pictures of her grandchildren, and pictures of the nine great-grandchildren she had at the time. We ordered the roses too. But there was an additional surprise that would have pleased her so much. My nine-year-old granddaughter also wanted to deliver a eulogy. Why not? She had just seen her great grandmother at our niece’s wedding reception the month before. She drew a picture to go with this eulogy: 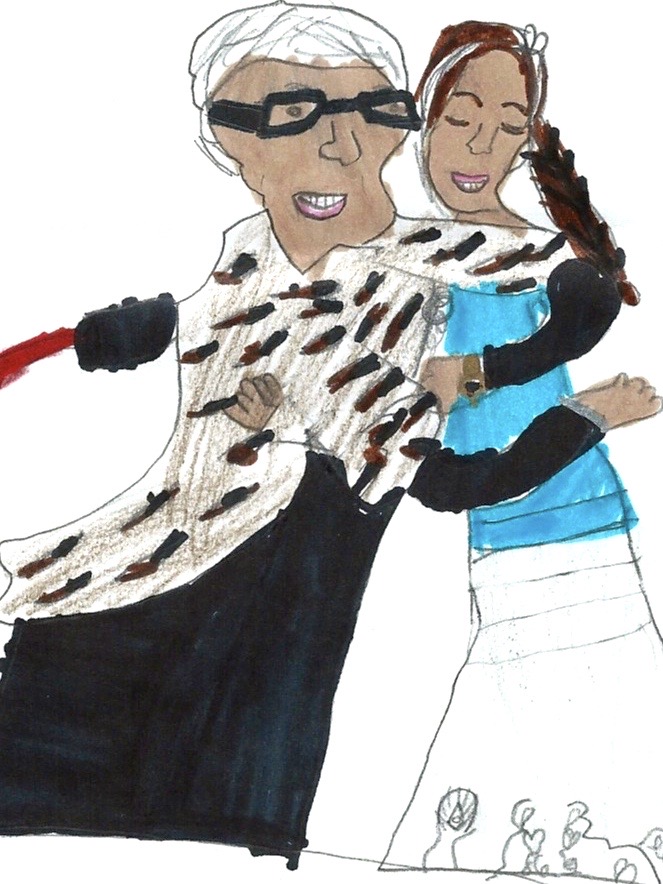 My Bubbe is so special. She helped me inherit the gift of being good with elderly people. When I was very little, she used to crawl on the floor to play with me and my sisters. She didn’t miss a thing. Every time I made something, she put it on her refrigerator. I felt very close to her. When I have children in about 21 years, I will name one with a name that starts with an E to remember my Bubbe. If she was in a Harry Potter house, she’d be a Hufflepuff, loyal and kind. I miss her so much. One time I went over to her house, and there was a big bowl of candy as always. I took a caramel  It calmed me a few days later when I needed it. When she broke her hip, and nobody thought she’d walk again, she did. I loved and love my Bubbe. Her spirit is in us, and we remember her in the way she wanted to be remembered. 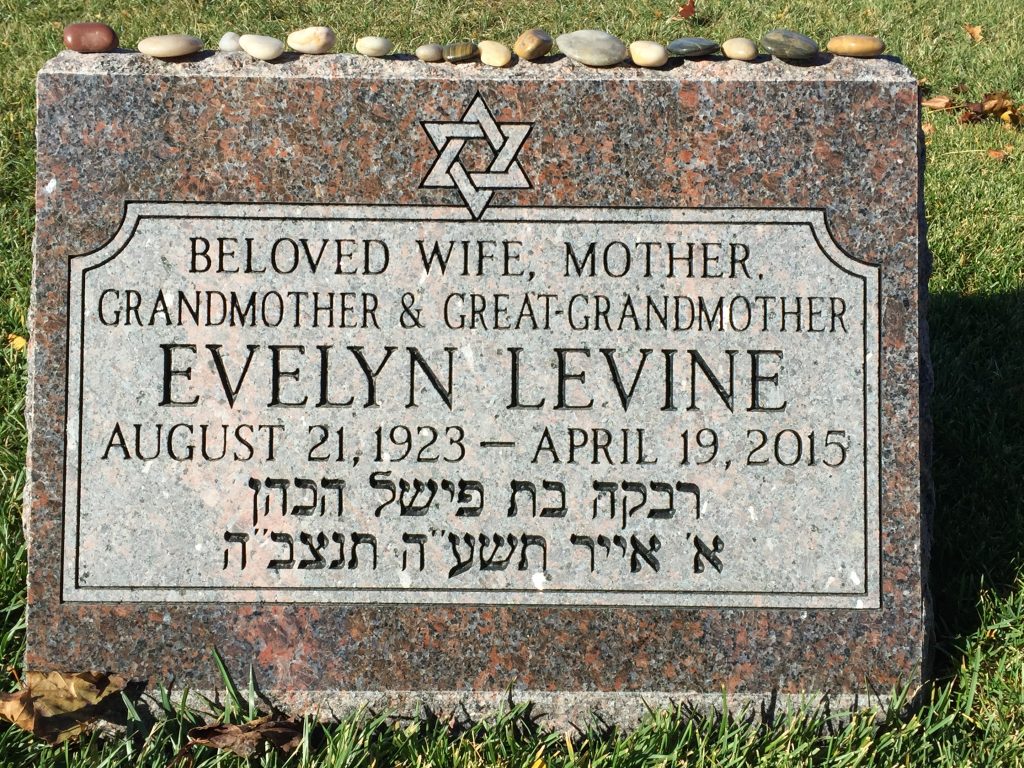 Our Rabbi once said that she gives a good funeral, and I know this is true. When a friend and member of our Chavurah (Jewish fellowship group) died last January, she officiated at a wonderful celebration of his life. His children, grandchildren, and a couple of life-long friends delivered eulogies that were so on the mark that it felt like Henry was in the sanctuary with us. It may have been long, but it was so meaningful to everyone there. Most of all, we knew Henry would have loved it.