In Her Memory by Sara Gootblatt
5
(8 Stories) 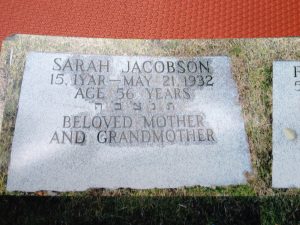 In westerns, Sarah was always the “good woman”, never a dance hall gal.

My mother told me my birth was the happiest moment of her life. She already had son, a wunderkind about whom she would brag about to the exhaustion of everyone around her. But Mom desperately wanted a girl and she knew that my birth,  when she was 38,  would be her last. She was not fantasizing about dressing a daughter in pink ribbons. It was to honor the memory of her mother Sarah who died suddenly and tragically. The shock  was deep and painful and clung to the family like a dark cloud.

My parents did not just use the letter “S” and name me Susan, Sharon or Sandra  in Sarah’s honor.  My mother wanted to give me my grandmother’s actual name. Her only bow to modernity was to take of the “h”.

So I was named Sara  and my mother and her 5 siblings were ecstatic.  But I was stuck with an old fashioned “granny” name! (In dishing with the other yentas on Bronx benches, a friend said to my mother when told that her  first choice for my  middle name was to be “Jane”: “You’re giving the baby the plain middle name of “Jane” when you’re already sticking her with the name “Sara”!  They decided to use Judith.)

My mother often reminded me that my name in Hebrew means “princess”, but it did not make me feel any better. In my 13 years in New York City schools, there was no other Sara in my grade or in the entire school. How I desperately wanted a more popular or catchy name. I  had 3 close friends named “Carol”,  many classmates were named either “Barbara”, “Susan” or “Linda” or the  most popular,   “Judy.”

The name Sarah not only evoked elderly women, but was the leading character in “Sarah, Plain and Tall.”  In westerns, Sarah was always the “good woman”, never a dance hall gal. What kind of role model was this for for a girl who wanted adventure and romance? I played around with nicknames and  I called myself “Sary”  in my diary.  When I started high school I told some friends I wanted to  use  that name. But too many people knew me as “Sara”,  and “Sary”did not stick.

So when I went away to college, I announced to my new friends that my name was now “Sari”! (I had  observed that any name ending in  an “i” had a bit of panache.)  I instantly felt hip and more attractive. (I thought I was the only girl in the entire university named Sara  until I met someone named Sally who was also a secret Sarah. It created a real bond between us.)

I answered to the name  “Sari” for four years. But more and more I felt comfortable with my real name, and when I graduated college I decided to discard my nickname. (When someone calls asking for “Sari” I know they are college friends.) I began to treasure the beauty of a biblical name and had a new found appreciation of the name “Sara” as a connection to my late Bubbie, my family and my Jewish roots.

I have been surprised to see how many of my friends have granddaughters and nieces  are named Sara. I wonder if they are pleased knowing how many girls share their name.  I hope they all know that their name means “Princess.”

14 Responses to In Her Memory

On Nicknames and Wearing Black at Funerals
by Joan Matthews