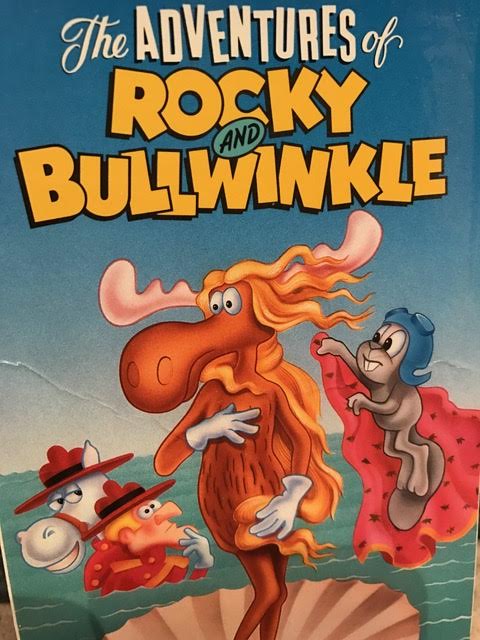 Stroke, stroke, bail…bail..bail…bail! If only you could hear my accent. Moose and Squirrel, Boris and Natasha (did anyone else see her resemblance to the original Barbie?), Dudley Do-Right, Mr Peabody and his boy Sherman. My brother and I loved them all, and reveled in the silliness of the Cold War cartoons with our heroes always defeating the sinister Mr. Big and the witless Soviet spies, the clueless Canadian Mountie who somehow always got his man, and the super-intelligent dog and his Way-Back machine, where we learned some form of history. Bigger than a breadbox, smaller than Texas; it must be Mount Flatten! It was a half hour of bliss within the format of a fractured fairy tale and we felt we were very sophisticated to “get” it.

We couldn’t wait for the cartoon to come on, gladly putting aside any homework, music practice, anything else on our schedules. It was Must-See TV in our household. Later in life, I bought several compilations on VHS format and my kids loved it as much as I had; second generation confirmation of good taste. My younger child, now 27, was saddened when those tapes were ruined two years ago in a massive flood, as they are no longer available in any format. How will we now pass it along for future generations? These days seem ripe for such inspired, clever nonsense.

At a younger age, my brother and I also loved the Disney full-length animated feature films. My first film was Fantasia, my brother’s was Peter Pan, but we both loved Cinderella, Sleeping Beauty, Dumbo. Bambi. Snow White was before our time, but we saw it when it was re-released. The animation of all of these remains stunning and the music is still singable. I can probably sing all of it right now (of course Disney got help from Tchaikovsky for Sleeping Beauty, but it worked). He was also the master of making the beautiful into the nightmare – he turned out some really scary sequences in all those movies and had us young ones diving for the covers for weeks after seeing those films.

In 1970, just before my brother headed to Israel for two years, Fantasia was re-released and my super-straight brother and I went to see it again. He didn’t know that the hippies had discovered this was a great movie to trip out to and was bewildered by the crowd that showed up at our local theater that evening. I was just amused. The music and animation remain superb; stunning, swirling sequences. One wonders what the animators were high on while imagining those episodes, so long ago.

My brother and I had the worst fight of our lives when he was 8 and I was 3 over a Disney-inspired moment. We had a window seat in our wood-paneled den in Detroit. We each liked to use it as a space on which to play. I was doing a little production with my dolls when he, being much larger, pushed me aside to use it as a desk. He was re-creating a Cinderella ad on a pad of white paper. I tried to shove him back to get my space back, but was unsuccessful. With anger and deliberation, I marched behind him and bit him where I could reach him…on the butt cheeks! He howled in pain. I got my performance space back for a millisecond until our mother showed up and sent me to my room for an hour. Cinderella triumphed. I sulked. My brother and I both got over it and remain the best of friends and both Disney loyalists forever.

11 Responses to Moose and Squirrel

Ahh…Cartoons
by rosie
There are no other live stories written on this prompt.
<!-- End Facebook Pixel Code —>