The summer after my sophomore year of college, I was working in Boston, and my best friend and soon-to-be roommate Barbara was studying in Tokyo. We decided to meet at the end of the summer in Berkeley, which was kind of halfway in between. We had some college friends who were there for the summer, in a big old house on Parker Street. So I flew west, and she flew east, and we met at the Parker St house, where we thought we would stay for a week or two. However, it turned out to be a major crash pad, with lots of people coming and going all the time, and barely enough room on the floor for everyone to sleep. This wasn’t what we had expected, so we decided to move on. But where to go?

Two college girls on a summer adventure by plane, train, and many automobiles.

Another college friend of ours, Debbie, lived in Seattle, and said we were welcome to come and stay with her and her family. So how to get there? We hitchhiked, of course! Barbara and I had done quite a bit of hitchhiking around Cambridge, and once from Cambridge to New Haven for a demonstration in support of Bobby Seale and the Black Panthers. We had even hitchhiked to Washington, DC for another demonstration, but we didn’t realize how much bigger this undertaking was, and that it would take us four days to get there. 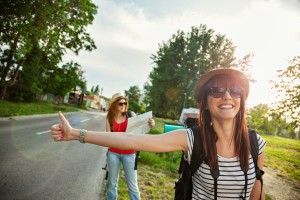 (This isn’t actually a picture of Barbara and me, but it looks a lot like us.)

It wasn’t hard to get drivers to stop for two reasonably attractive young girls, but we were picky about what rides we accepted, and looked over the car’s occupants carefully before we got in. One driver said to us “Do you believe in free love?” Barbara and I exchanged glances, puzzled about what to say. Yes we did, but not with that guy. We didn’t want to lie, but we also weren’t going to take the ride. So I said “Yes we do . . . but we’re busy right now.” And we walked away from the car. We got a good laugh about that, since we obviously weren’t busy with anything except waiting for another ride.

One of our rides the first day was with two guys we called Spin and Marty because they reminded us of the characters in The Adventures of Spin and Marty on the Mickey Mouse Club. They were smoking a lot of dope, and the road was very twisty and mountainous. Barbara and I were sure that the car was going to go off a cliff on one of the hairpin turns. The only way to deal with the terror was to get really stoned with them, so we did. (For medicinal purposes, of course.) I have driven that road in recent years, and I am amazed we survived.

For both of us, it was our first time in California, which we knew about mainly from songs. When we saw a sign for Mendocino, we asked the driver to stop and let us out. We wanted to experience the place “where life’s such a groove you’ll blow your mind in a moment,” as it said in the Sir Douglas Quintet song. The car drove away and we walked around, but it was pretty disappointing. A nice enough little town, but it didn’t blow our minds.

I don’t remember where we slept the first night (I should ask Barbara if she does). The second night we stayed in a cabin at Crater Lake, Oregon, that the people we were riding with had rented. It was cold, and there was already some snow on the ground, so we were grateful to be in a cabin, even sleeping on the floor. The third night we stayed with some college students in Portland, which was great. We were tempted to stay on in Portland, but also eager to get to Seattle, so we hit the road again. In the afternoon of the fourth day we arrived in Seattle and Debbie picked us up and took us back to her parents’ house.

After a couple of days in Seattle, Barbara somehow heard from her parents (I have no idea how they got in touch with her) that her mother was having serious health issues, so she flew home. I wasn’t ready for the adventure to end. Debbie and I drove up to Vancouver and did some sightseeing there, and then she put me on the train across Canada. Four days from Vancouver to Montreal. I met some fabulous people on the train, including a couple of American guys who had fled to Canada to avoid the draft, and one guy who looked exactly like Stephen Stills. It was a beautiful ride, especially the early part, going through the Canadian Rockies. The train ticket was such that if you wanted to explore somewhere, you could get off the train one day and get back on at the same station another day at the same time. I thought I was going to do that, but I was having too much fun on the train, so I never did.

When we got to Montreal, we said goodbye to each other and didn’t even swap addresses or telephone numbers. If only we had had the internet, or even cell phones and text messaging, we might have kept in touch, but it was 1970 and all of that was a long way in the future.  I then took another train from Montreal to New York, and a bus from Port Authority to New Jersey. The bus dropped me off a couple of blocks from my house. I walked home and surprised my parents, who had no idea I was coming. And a few days later, I celebrated my 19th birthday.

9 Responses to Planes, Trains, and Automobiles