.    When anyone asked about my bowed legs, I told them that I grew up on the back of a horse and had done some bronc riding on the fair circuit in California.  When they asked about going into the pros I told them I wasn’t good enough.

Those questions were asked often while I was in the Navy. My answer usually depended on who was asking. Once in a while I would tell them it was a genetic thing, my brothers and sisters were just as bowlegged as I was. I finally settled on a story that seemed to satisfy everyone’s curiosity.

It was my story, so I could go anywhere I wanted with it. At times my imagination astounded me, and since no one ever questioned me, I got in deeper and deeper.  I should have realized that sooner or later the truth catches up with   you.

I was stationed on a floating dry dock in San Diego. I had been in the Navy about three years and every weekend my buddy George Dotson, and I would be looking for a place to go. Some weekends we went to Merced to see my family, and once we went to Salt Lake City for the weekend to see his family. We hitch-hiked everywhere, so our travels were cheap. Tom Mason, one of the guys stationed with us lived in western New Mexico. Tom was going on leave for two weeks and invited George and me to come out for the weekend. It sounded like a great idea, so a few days after Tom left; we took off a little early on Friday and headed for New Mexico.

We made pretty good time hitch-hiking but we had to get a cab from the last little town out to the ranch, because there was no one on the road. Tom hadn’t said much about their ranch, so we didn’t know what to expect. It was a bigger ranch than I was expecting. They had several thousand acres, and ran a lot of registered Herefords.

We met Tom’s dad the next morning.  He was also a Tom and I think of them now as Tom and Big Tom, even though they were about the same size.

As we were eating breakfast, Tom’s dad said, “Burl I hear you are quite a horseman.”

I checked to see if he was serious, but couldn’t tell from the expression on his face. I decided to go along with it, what could it hurt?

I told him I had been around horses most of my life, but I didn’t say that most of them had been work horses.

“I’ve got a horse out in the barn that gets a little crazy. I’d appreciate it if you’d take him for a ride and see what you can do with him.”

My heart almost stopped right there. But to say no meant that I would have to admit to stretching the truth, about a mile or so!

I said “Sure, I’d be glad to take him out for a ride.” I felt like a fool pretending to be some hotshot cowboy, but I couldn’t think of a graceful way to get out of riding that horse. I was thinking maybe all four of us would be going on a little ride around the ranch, but not knowing what kind of animal I was about to get on, had me scared to death.

“I’ll go on out to the barn and get the horses ready, and you boys can come on out when you finish your coffee.”

Tom and his Dad were both in the barn when George and I moseyed in a little later. Evidently they’d seen us coming, because they had this big ‘black’ saddled and Tom’s dad had his jacket over the horse’s head. He seemed to have one of the horse’s ears in his mouth. Oh Shoot! I had seen this in the movies. They bite down on the horse’s ear and it hurts so bad the horse just freezes. Then when they turn that ear loose the horse explodes. Man, I wanted to run all the way back to California. I sure didn’t want any part of that horse.

Tom, standing along side of the horse, said, “Come on, I’m not sure how long Dad can hold him.”

I looked at George and he was waiting for me to show him a trick or two. I sucked it up and stepped up to the horse. As soon as I was in the saddle Tom asked, “Are you ready?”

I was so scared I couldn’t make a sound. I was sure it would just come out as a whimper anyway. I just nodded my head like the bull riders do on television.

Tom’s dad jerked his jacket off of the ‘black’s’ head; turning loose of his ear, at the same time. Tom hit the horse in the ass with his hat and let out a war whoop. That horse hunkered down and then went for the open door. He never bucked once but picked up speed with every jump. As we raced through the open doors I heard Tom yell something about a field. We cut through the back yard and around the house, I mean we’re flying. Rounding the house I could see the shaded lane, leading out to the main road about a half a mile away. At this rate I figured we would be there in about ten seconds. I was wondering which way to turn when we hit the main road, when I noticed the plowed field off to my left. I had a good hold on the saddle horn and had been easing back on the reins when I saw the plowed field. I realized what Tom had said as we left the barn. Evidently he had seen that I was out of my class and gave me a way out. I turned the ‘black’ into the plowed field.

Within about a hundred yards the horse was winded and had slowed down to an easy trot. When we got back to the barn Tom’s Dad was waiting.

“Hey Cowboy, you handled him pretty good. He gets a little feisty sometime.”

“Thanks for letting me take him out. You ever think of entering him in the races?”

We all got a chuckle out of that. I was just glad to be able to get off of that horse with my skin and pride half way intact.

Needless to say, that was the end of my made up horse stories. Neither Tom nor his Dad said anything about my riding skills. Truthfully, I think they had set me up. That horse wasn’t wild and Tom’s Dad wasn’t biting its ear either. But it was a good way to show a guy that he needs to be careful who he tells his wild stories to. 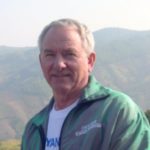