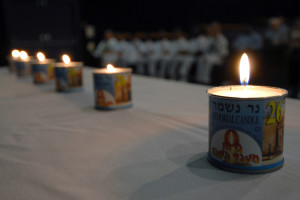 070426-N-4965F-003
PEARL HARBOR, Hawaii (April 26, 2007) – Six memorial candles are lit during a Holocaust Remembrance Day ceremony at Sharkey Theater on board Naval Station Pearl Harbor. The six candles were lit during the opening remarks of the remembrance observation to commemorate the lives of more than 6 million Jews that were lost during the Holocaust. U.S. Navy photo by Mass Communication Specialist 1st Class James E. Foehl (RELEASED)