Prompted By The Eyes Have It
17 comments. 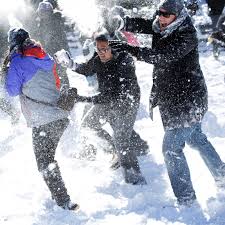 My father was born in Chicago in 1921, but spent most of his youth in Riverhead, Long Island, which he described as “mostly potatoes”.  It was a small town life, limited but comfortable enough as the son of a low-level oil company manager, even through the depression.   There were a few trips back to Chicago to visit his mother’s family until her health failed (possibly rheumatic heart disease) and she died shortly after his sister was born.  He was ten years old.  It must have been lonely.

My father was leaving the lecture hall when he stepped out of the doorway and a snowball—or more accurately, an ice ball—came hurling from the side and hit him directly across his open eye.

He was probably the first in his family to go to college, though he had little ambition.  He chose William and Mary in Virginia, mostly because a girl he liked was going there.  Despite the generally mild weather, when winter arrived it brought a big wet snowfall.  Naturally, the students promptly turned the quad into a free-for-all snowball fight.

My father was leaving the main lecture hall when he stepped out of the doorway when a snowball—or more accurately, an ice ball—came hurling from the side and hit him directly across his open eye.  It was incredibly painful and the light went out on that side.  He had suffered a detached retina.  The only treatment then was to have him lie as still as possible, his head sandbagged on either side, for months on end, in hopes that the tear would heal enough to preserve some vision.  His schooling was disrupted and he remained effectively blind in that eye for the rest of his life.

Meanwhile, the US was about to enter World War II.  My father was now 4F and couldn’t enlist, so he continued in school once his eye was stable.  Eventually he was drafted despite the eye, and after some uncertainty over what to do with him, he was assigned to Japanese language school at the University of Michigan and Yale.  The world suddenly opened up.  The other students were smart, funny and came from cities across the US.  They challenged his narrow world view and awed him with new foods like “pizza pie”. And he was learning about Japan, a country literally on the other side of the world, with a completely different language.

When the war ended, the army posted him to Japan for several months, and he got to travel a bit, talk with local people and develop a lifelong fascination with Asia and  other countries.  Once he was released, he sought out a job that would take him to China, where he met and married my strong and liberal-minded mother.  When they had to leave in 1949, she encouraged him to return to school on the GI Bill and he became an agricultural economist working in developing countries.  His work led back overseas, and he never returned to Riverhead.

In a strange way, when that small-town boy lost his sight, it turned out that his eyes were opened to the world.

17 Responses to Was Blind but Now I See