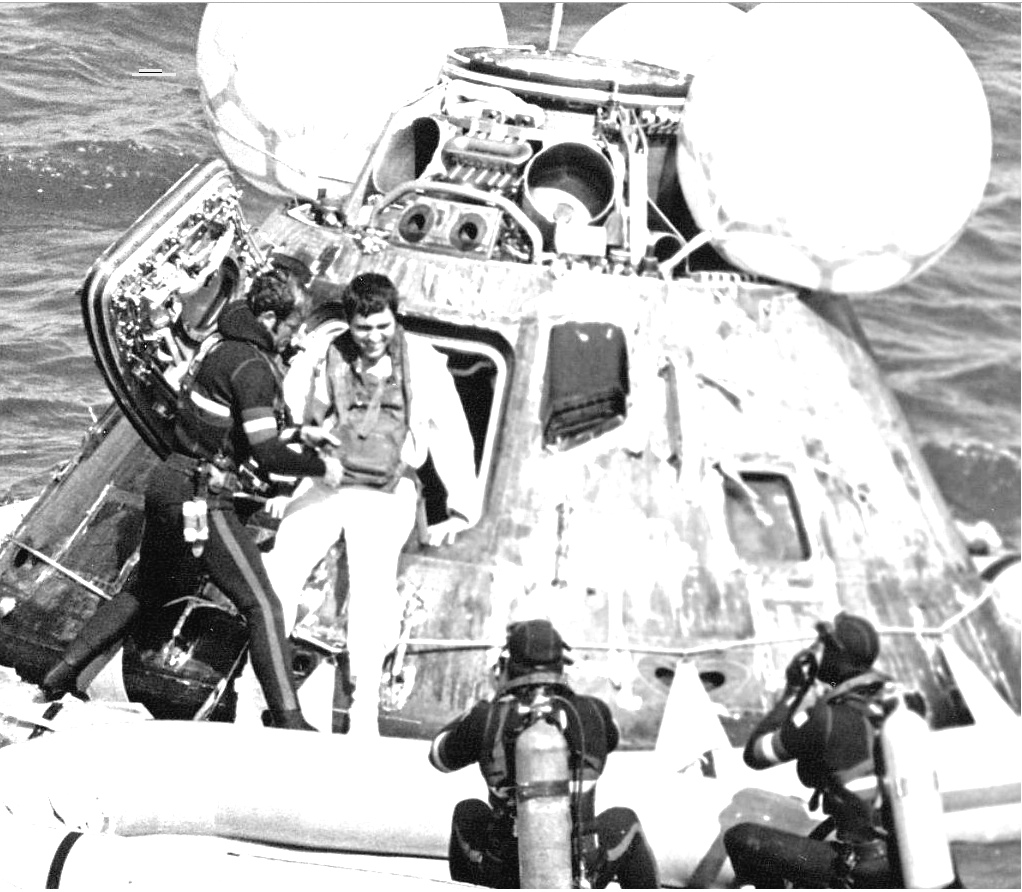 On July 20, 2021, The Richest Man In The World donned a cowboy hat, climbed into a rocket, shot himself and his three mates 60+ miles above Earth, landed unscathed 11 minutes later, and took questions from a breathless press.

The media went wild. They made forecasts of a hugely profitable market for space tourism. Space tourism? Did I hear that right? I am supposed to care about space tourism?

I needn’t remind you, Boomers, of the thrilling days of yesteryear — the triumphs and tragedies of the Mercury, Gemini and Apollo missions, the Space Shuttle program and the International Space Station that followed. But I think I will, if just for a moment, to offer some perspective on this new chapter in flight and also to note the 50th anniversary of the last lunar mission, Apollo 17, which will be upon us soon.

The photo above presents a scene from 17. That’s astronaut and geologist Harrison Schmitt, Ph.D., emerging from the capsule at mission’s end, December 1972. Today, 86-year-old Schmitt is the last surviving man to have walked on the surface of the moon. Do you remember the excitement, the pride? The scientific advances that accrued from these missions? I do.

Let me say that there are things I admired about TRMITW’s flight. The man’s reverence for America’s role in space exploration seemed genuine. His flight’s launch date was chosen to echo that of Apollo 11 in 1969. It most certainly took guts for him and his passengers to strap themselves in and blast off with no guarantee of making it back. And I was fascinated so see the rocket landing so gracefully on land. Kudos to the team that pulled that off. But like those who came generations before them, these behind-the-scenes professionals worked their magic out of the media’s glare.

Regarding their predecessors, I can shed a very little light on a few of the people who supported the 1960s-1970s missions. A man who lived in my town worked in systems development. His work was top secret, which made his involvement in it top secret. But one day, in the run-up to an early mission, he extended his left hand, palm up. He then took his right index finger and with it made an arc into the center of his palm. “It (the capsule) will come down right here,” he whispered proudly. Not in his hand, of course, but at some precise spot in the middle of the Pacific Ocean.

I recall as well a brilliant high school friend who, at intervals, would take unexplained trips to Cocoa Beach, FL. When pressed, he revealed his role in creating the Space Shuttle’s navigational system. He went to Florida alone, with no fanfare, to view the fruits of his labor: shuttle launches at Cape Canaveral.

So it was also with the Navy divers and pilots charged with the space capsules’ splashdown recoveries. We see them here, young men in their mid-twenties. They trained for  six months or more, night and day, in rough seas and calm, and often in shark-infested waters. They prepared for dangerous contingencies such as a nighttime recovery, a recovery far from the expected site and—worst of all—an inverted capsule requiring an emergency underwater rescue. In these final moments of the mission the divers held the astronauts’ lives in their hands. And like the engineers, controllers and others who worked out of the spotlight, they too went largely unheralded.

Running currently is a clever “retro” TV ad for the potato chip brand that’s packaged in a can. It opens with a scene of two astronauts opening a capsule door like the one in the photo. No rescuer is in sight. “Where is everybody?” they ask. The scene shifts to a Mission Control-type room where the controllers, oblivious, are gorging on the chips. It is because this scenario is so outrageous, so antithetical to the actual outcomes, that we—especially we Boomers—can laugh.

Perhaps I should withhold judgment on TRMITW and the prospect of privately funded and/or collaborative public/private space projects. Perhaps I should wait and see how it all develops. Things have a way of working out.

As for participating in an out-of-this-world rocket ride, however, I think I’ll wait for the tour bus. But thanks.