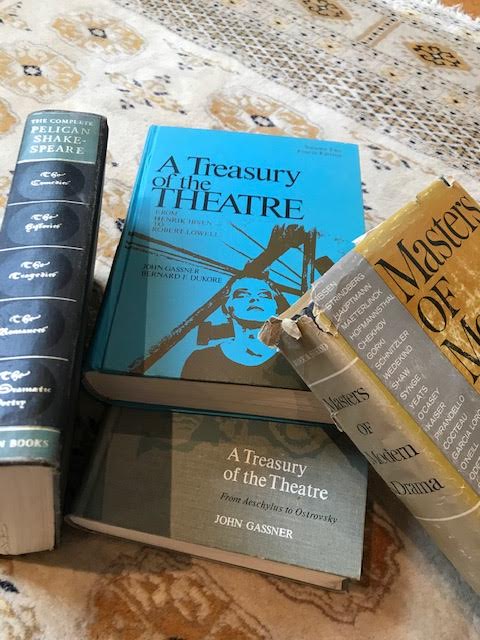 When I entered Brandeis, it still had a General Education requirement, so I had to take courses across varying disciplines, not only in my major of Theatre Arts. I wanted to get all those requirements done quickly, so freshman year, I took French 10 (all literature, read in French), Humanities 1 (all literature), Theatre Arts 1 (all literature) and Math 10 (Algebra). I did a LOT of reading. The syllabus for Hum 1 alone would bring anyone to her knees. I read everything for every course until the very end. I read the Monarch Notes for “War and Peace”. I thought I’d earned it. Hum 1 had papers sprinkled throughout the semesters, but the rest just had one final exam, taken over several hours, written in a blue book; long form answers to thought-provoking questions.

For me, the most challenging course was Algebra. I’ve never gotten along well with numbers. My brain just isn’t built that way. And this course, standard for freshmen, had many sections and was taught by graduate students. Our first teacher was French, spoke with a heavy accent and pronounced “integer” with a hard “g” like “grr”. We had a difficult time following what he was saying and protested. He was replaced by Ron Simkover; a real improvement. He took a liking to me and I sought some out some private help as well. I also decided to take the course Pass/Fail. This was a new concept in 1970. We could take one course a semester Pass/Fail (but I still submit a self-addressed post card so I could find out what my grade would have been; the teacher didn’t know who took the course P/F).

I only took one semester of that course. I studied as hard as I could for the final exam and walked in full of dread. We had three hours and loads of problems to solve. Open your blue books NOW. I solved all I could, always showing my work for partial credit.

I came out sure that I had passed. Relief spread over me. It was also my last exam of my first term. I was done. I spent the evening watching my boyfriend play pinball in the game room of the new student union. Then we went back to his off-campus apartment and I lost my virginity to celebrate the end of the semester and passing Algebra. I had turned 18 a month earlier, so was no longer jailbait.

When the post card arrived, I actually got a “B” in that dreaded class, but it was worth the peace of mind to have taken it Pass/Fail.

There were no exams in my many acting or speech classes. We had to do final scenes or monologues. The scenes were assigned by our professor. We picked the monologues; one classic, one modern. I performed one from “Romeo and Juliet” (“Gallop apace you fiery-footed steeds”) and one from “The Fantasticks” (This morning a bird woke me up”). I still love both.

I took several more Theatre lit classes (several taught by Martin Halpern, Retrospect’s Suzy’s brother-in-law). We covered Ibsen (considered the father of modern drama) through Albee, who was quite current in 1973. Also, a fabulous Shakespeare class. All of those had prodigious blue book exams with thought-provoking questions about some deep topic delving into the readings from the semester. Since we had to write opinions and they were graded by graduate students, I was never sure how they could be graded. Why should someone pass judgement on my opinions?

I loved my Art History courses. The first was a standard survey course from Renaissance through Modern art. The semester I took it, Brandeis experimented and had four professors teach part of it, so Vico Borgo taught Renaissance, Bob Berger taught Baroque and a bit more, Carl Belz taught 19th century and Gerry Bernstein taught 20th century and was my section leader. The exam was identifying slides of famous paintings we had learned about throughout the semester.

I went on to take two more courses with Vico; Italian Renaissance and Northern Renaissance painting. The final for the latter class was not a blue book exam, but the most interesting project of my entire four years at Brandeis. We had to pick a painting from that era that we could actually SEE and study in person; the provenance, the history of its restoration, how it came into the collection, etc. As a lover of Tudor England, I chose Holbein’s Lady Margaret Butts at the Isabella Stuart Gardner Museum in Boston (they have Dr. and Lady Butts. Dr. Butts was Henry VIII’s court physician, Lady Butts was his wife). 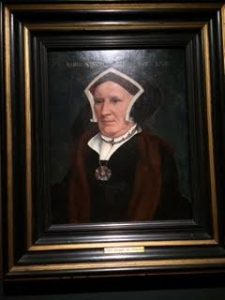 I did as much research as I could going through sources in the Brandeis library. Finally, a week before the paper was due, I called the Gardner and drove over. This was 1974, long before the terrible theft 29 years ago. It was a sleepy little museum with few staff people. I spoke with the curator who was vaguely annoyed with me. “Not another one of you Brandeis students!” I assured her that I would be the last. We chatted for a few minutes. She was young. She asked if I knew Gil Schwartz. Indeed I did. He was a theatre major who graduated a year earlier and was working improv in Boston (he is now the VP of Communications at CBS and writes business books under the name Stanley Bing). He was also very handsome. She had been at a party with him the weekend before. We made that connection and I was home-free. She gave me a pair of white gloves and full access to the archives. I sat and read the actual letters that Bernard Berenson wrote to Mrs. Gardner when he saw the pair of paintings in England and convinced her to buy them in 1899. I was transported, sitting in a Gothic alcove, surrounded by history and enveloped in the lives of these famous people. Eventually, I went into the gallery and studied the paintings; both of them. I chose to write about the one that had less restoration work done on it through the ages.

This is the gallery from which the Vermeer and the two Rembrandts were stolen, years later. I took it personally. That was MY gallery. I had spent one of the best days of my life in that gallery and now no one will ever see it intact again. I loved doing that project. I learned a great deal. Much more than writing in any blue book.

11 Responses to A Lot of Lit