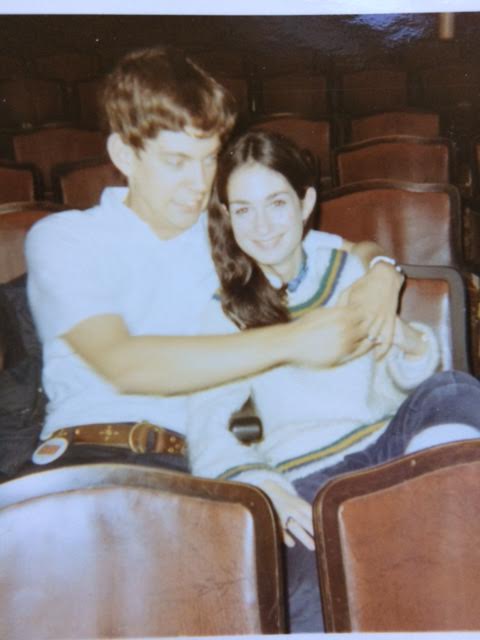 Camp was a strict place and we were not supposed to fraternize with the staff, but my best friend and I were fascinated by Donn. 1969 was the second summer that he and his sister had come to work as part of the back-stage theater crew, she on costumes, he on scenery. They were several years older than we were. Donn had tussled hair and a great overbite. He looked a bit like Mick Jagger and he liked to hang around with Val and me, though the expression “Camp frowns” clearly was in play here. We didn’t know it, but he was also a stoner…very much frowned on by the powers that be at Camp. Two weeks into the eight week summer, Donn was fired for “dealing pot”. In fact, he had purchased it from one of our theater compatriots. Val and I begged for leniency but it was too late and he was sent packing. He and I said our goodbyes in the wings of the theater with a long, lush kiss. He remarked, “Our goodbye would have been a nice hello”. Indeed.

He promised to write and I’ve always been a diligent correspondent. So we wrote to one another and I learned that very shortly after he returned home, he was shipped off to Vietnam. He never wrote about combat (thinking back, I suppose that would have been censored). He wrote about being stoned all the time, the heat and boredom, and wanting to return home. Once he included a cartoon. It showed a man undergoing a physical exam in a doctor’s office. The man had his pants down, the doctor examined his penis. The caption read, “You’re right it DOES look like Nixon’s nose!” Eventually the correspondence stopped. I never heard from him again.

5 Responses to Donn goes to Nam

A Family Without Men
by smithlouise
<!-- End Facebook Pixel Code —>