Downtown, Everything’s Waiting for You* by Tom Steenburg
50
(58 Stories) 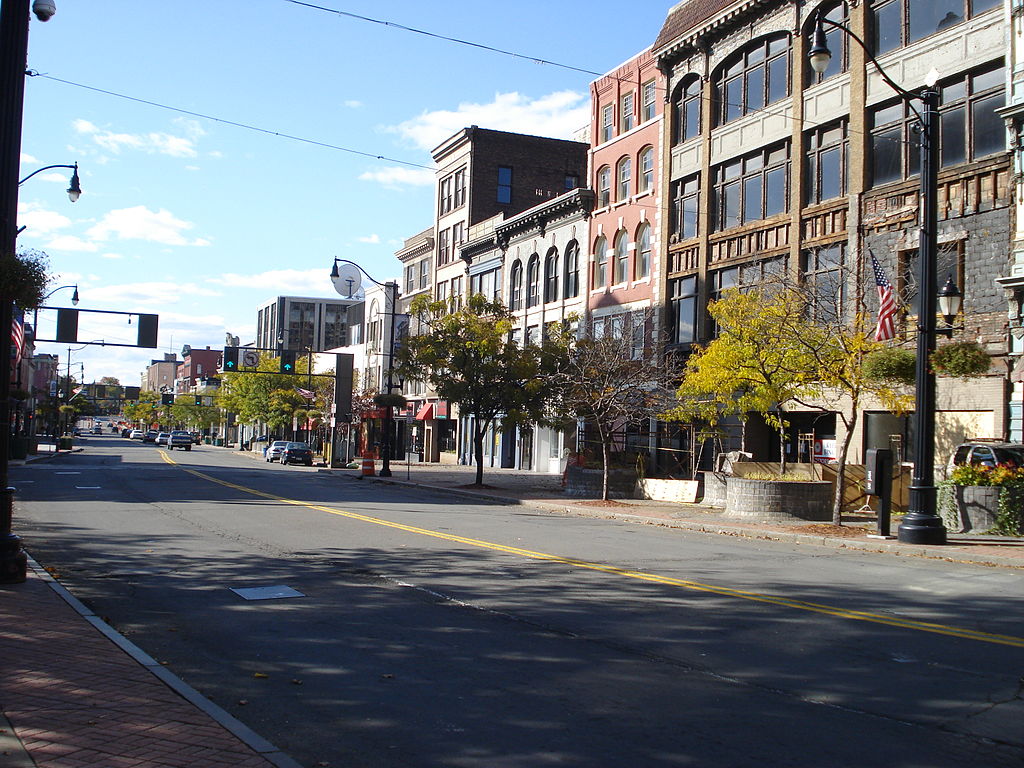 “Local Shopping”.  Gertrude Stein purportedly said of the place she grew up, Oakland, that “there’s no there, there”, i.e. the town she knew no longer existed.  Sadly, I think that’s largely true of “local shopping” except, perhaps, in big cities, where I submit it’s a different beast entirely.  I am intrigued by the American Express initiative of shopping “local” the day after Black Friday, but just where can one do so these days?  At the local outlet of a nationwide chain?  Not the same thing, I believe.

I am fortunate to have a relatively recent experience of living in a small village that had a “downtown.”  Not extensive, to be sure, and oriented toward visitors spending time in the Mid-Hudson Valley but it offered bona fide “local shopping.”  Most of the places were of little interest but there was one shop, and I say “shop” deliberately, run by a wonderful woman who emigrated to the village from Wales.  She was and still is a hoot.  And true to her roots, she offers those who might be interested a local outlet for Marmite.

The proliferation of suburban shopping malls is local. Ish.  To me, however, there is a “neither here nor there” aspect to these sterile monstrosities. People seem to flow through these expanses like so many zombies in search of something.  For me, “local shopping” means the downtown area in the small city where I grew up.

Already in decline even in the ‘50’s it was still vibrant.  Two department stores.  All sorts of other downtown fixtures – jewelers, women’s fashion, men’s stores, Army-Navy, hobby shops, and a Woolworth’s.  All accessible by our local transit system, a fleet of tired buses that nevertheless made it easy to patronize the downtown area.  Where we lived was a block away from two bus routes, so downtown trips were a breeze, and convenient because my mother did not drive at the time.

I do not recall ever resisting a shopping trip back then.  Probably because almost always it would involve some special treat, like a homemade doughnut from the Home Dairy Cafeteria, or maybe even lunch there, topped off with some of the best chocolate pudding ever.  Typically, the destination was one or the other of the two department stores. These were five-story wonders to a grade-schooler.  So many departments.  Elevators operated by uniformed staff wearing gloves.  These visits almost always included at least a quick turn through the toy department, but sometimes I was given free rein to spend time there by myself (remember this was the ‘50’s).  My mom found that the toy department was a convenient place to park me while she went into that very mysterious department, “foundations”.  I paid no mind, until one day I, even I, grew bored at looking at the trucks and Erector sets, so I wandered over and discovered that “foundations” were women’s undergarments.  Now I suspect that men of all ages would be a bit confounded by the term, but to a little boy of 7 the term seemed absolutely bizarre.  But looking back it makes sense: many of those garments were reinforced by bones, wires, stiffeners and God-knows-what other instruments of torture, like so much rebar in reinforced concrete. “Foundations” seems appropriate.

But surely the highlight of local shopping, downtown shopping, was Christmas shopping.  Stores that generally closed at 6 p.m. were open until 9 p.m.  between Thanksgiving and Christmas. (They were, of course, never open at all on Sundays.) Both daily papers, morning and evening, featured prominent displays of the number of shopping days remaining until Christmas.  The city strung decorations, including giant illuminated candles on the light poles. Typically, some snow fell during the period, too, adding to the festivities.  And Christmas was the one time a year that I had serious shopping to do.

Christmas 1956.  Being one not to waste time, and on a budget, the logical place for my quest was Woolworth’s.  Of course!  I could check off my entire list (my three sisters and my parents) and still have maybe something left for a little reward for myself.  And I must say, I did rather well.  Scarves for Suzie.  Barrettes for Barbara.  A skein of yarn for Louise, who was just learning to knit.  Some specialty pliers for Dad.  And, for Mom . . . .  Electrical tape!  Of course, just what every woman wants.  Come Christmas each of my gifts was appreciated.  Especially, it turns out, my Mom’s.  God knows what I was thinking, but Mom transformed this lowly pedestrian thing into a Christmas tree ornament, which has now attained heirloom status. 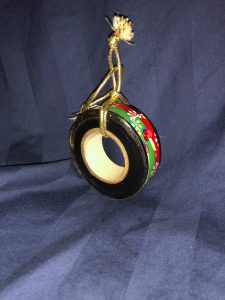 But for me and Suzie and Barbara (Louise was several years older) Christmas downtown was about Santa Claus!  Yes, the big opportunity to petition for the loot we wanted.  These were always big occasions, and always structured as yet another photo op to memorialize our passing tender years. 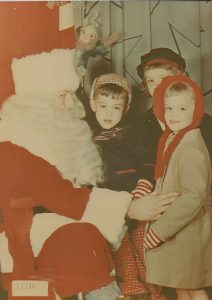 Fashion forward, even then

I don’t know how many years my sisters and I made the pilgrimage to visit Santa.  Not many, probably.  And it never dawned on me then that we faced a manifest contradiction: there were two department stores in town, as I mentioned, and each of them had a Santa.  How could that be?  I don’t remember any of my friends tumbling to this fact, either.  I gather our will to believe caused us to ignore contrary or inconvenient evidence.** But based on results, I would say that we always managed to find the “right” Santa.

A couple of years ago I paid a visit to my old downtown.  Gertrude Stein was right: my “there” was no longer there.

** But perhaps some did: I suspect that the guys of Firesign Theater understood, as evidenced by one of their anthems, “How Can You Be in Two Places at Once (When You’re Not Anywhere at All).”

16 Responses to Downtown, Everything’s Waiting for You*

You Better Shop Around
by Suzy