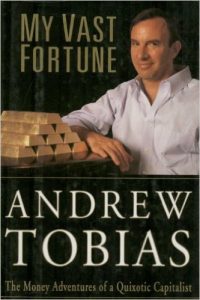 I was sitting next to one of the ten—surely one of the fifty—most powerful men in the world, Walter Wriston. Wriston was chairman of Citicorp, by a country mile the world’s leading global megabank back then; no slouch today, either. Citicorp was vastly more powerful than most nations; Wriston ran it; and from my limited dealings with him, I felt that if anyone had to be that powerful, I was glad the board of directors had chosen him.

If the truth be known, I am only vaguely aware of this year's GNP, let alone capable of projecting its level twelve months out.

This was an off-the-record dinner Citicorp hosted each year for the two or three dozen financial writers the bank found least offensive. The food was amazing. But placed neatly under each guest’s butter dish was what looked for all the world like a two-page college quiz. With our names already typed for us across the top, no less. This, it was explained for the benefit of first-timers like me, was the annual “Fearless Forecast,” in which we, the press, were to make our economic projections for the coming year.

Terror seized me by the lapel. Because if the truth be known, I am only vaguely aware of this year’s GNP, let alone capable of knowledgeably projecting its level twelve months out. As for such things as the M family (M1, M2, and the rest), or the way the Fed expands the money supply by buying government bonds, let’s just say that I have been known to get these things confused. (At business school, our classrooms had no windows. The joke in accounting class used to be “Debits by the windows, credits by the doors.” I still don’t understand what they were talking about.)

To my great relief, for each question—GNP, unemployment, Dow Jones industrials, Consumer Price Index and so on—Citicorp had charitably included the statistic from the year just past. So, while they were handing out a gold-plated perpetual-motion clock to the winner of the prior year’s forecast, I was busily adding a rough 10 percent to the previous year’s statistics, much as a cook might add seasoning to the stew. A little for inflation, a little for growth—and a lot for convenience, as it’s a great deal easier to figure 10 percent and round off than to figure 8.3 percent on the dot.

A year later, I was back at the annual dinner, no longer at Wriston’s table, and he was up at the podium handing me the gold clock. Not only had I won … I had won, he said, by a wider margin than anyone had ever won it before.

All of which I submit to prove to you that I am indeed as smart as the next guy (never mind the fact that to this day I haven’t been able to figure out how to get the clock to work) but that the next guy may not be smart enough to predict the economy or the markets either. I had won not because I had a clue what would happen, but because it seemed easiest to add 10 percent to everything.