Cate and I don’t have photos of our wedding because our photographer, who doubled as my best man, forgot to bring his camera. It was a small, informal wedding, followed by a restaurant dinner with more friends and a blowout party with dancing on the well-worn floorboards of our shabby little house (rent $50 a month) in a southern-Idaho beanfield. Outside, it was snowing. It was January 1977.

Lesson for readers: Try not to get married in January.

It was all good, but one of the clearest memories I have is of driving through foot-deep slush for most of the next day. For reasons that escape me now, we had decided to drive to Vancouver for our honeymoon. I guess we felt that leaving the U.S. would make the trip more memorable.

We were all packed. Early the next morning, hungover from the party, we trudged out to my Volkswagen squareback. It wouldn’t start. The only option was to transfer our stuff to Cate’s 1951 Chevrolet pickup, which had no turn signals or backup lights but at least was higher than the squareback, above the snow. Cate had bought the truck for $400 the previous summer. It was fun to drive, with a long stick-shift on the floor. The engine was loud. Its top speed was 55 — just right for the Carter years. Recently, we had discovered that the heater was not so hot. 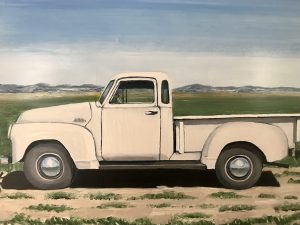 Usually, the snow in this high-desert country is dry, and sparse because the winds blow it off the roads. Our honeymoon snow was different. It was wetter, like snow back east, and the roads were ribbons of slush. The Interstate that morning was no different. The snowplows had not cleared the slush yet; maybe they never bothered, since the temperature was just above freezing by then. I couldn’t drive much faster than 40 without skidding.

Here’s where the plot (as well as the slush) thickens. We were almost to Boise when we realized that we had left the traveler’s checks in the squareback’s glove compartment. We were too far from home to turn back, and, luckily, Cate had brought some cash, and some sandwich makings. We started to downsize our plans, realizing we would be in a cheap motel instead of a fancy hotel. For better or worse, I have no memory of that motel, or Vancouver for that matter. I do remember wet, cold feet. We had tried, unsuccessfully, to waterproof our boots with saddle soap. I remember, barely, spending the first two nights with a friend of a friend from my college days — an artistic potter who lived alone in a cabin in the woods somewhere east of Seattle. She welcomed us and fed us after our chilly drive. I remember strolling around the cabin the next morning, marveling at the difference in the climate. There were ferns — green ones.

We drove into Seattle. Wandering around the city, we happened upon a poster on a utility pole: The novelist Tom Robbins was scheduled to speak that very night at a nearby auditorium. This was kismet. We were huge fans of Robbins, having recently devoured “Even Cowgirls Get the Blues”. I had been so impressed with the insights, and syntax, of the book that I purchased many copies and mailed them to friends. I had even written to Robbins, thanking him. Needless to say, we attended the lecture, which was free. I remember him urging tenderness as the number-one factor for a good relationship. He read some of our favorite passages from “Cowgirls”.

The next morning, we were off to Vancouver. We had some pot with us, hidden inside a cylinder of Tillamook cheddar. But at the border we pulled over in the last parking lot, which happened to be covered in deep slush, to reconsider the risk. After debate, we decided to smoke up our “stash” before crossing into Canada. We took out the smoothed-over plug of cheese, removed the baggie from the core, and smoked several joints with the truck windows wide open. Maybe we even threw some of the pot away, but that sounds inconceivable. It was cold. There were no other vehicles nearby. Nowadays, there are probably cameras. But nowadays marijuana is legal. Perhaps I would remember the border crossing if I hadn’t been so stoned. I think Cate was driving.

After a few days in Vancouver, we came back across the border and drove through Washington’s Skagit Valley, a moist, temperate area teeming with mushrooms. The valley figures in more than one Tom Robbins novel. We ate lunch at a restaurant in Mt. Vernon, which we had learned was the closest town to Robbins’ home. We could have asked directions to his home. We didn’t. We had oyster stew.

Looking back from 2022, it was a good honeymoon. And the drive home was slushless, which might not be a word but should be.

7 Responses to In the Slush