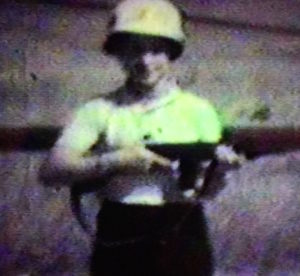 At the Gaza strip (then part of Egypt), 1963. Can you believe the Israeli border guard let me wear his helmet and hold his rifle? Digitized from 8mm video.

Every Passover my grandfather had prayed, “Next year in Jerusalem,” and the summer before my bar mitzvah he made good on his promise. Only fifteen years past independence, almost every Jew could then be proud of Israel: proud that, after two millennia, Jews once again had their own nation; proud of the way it had twice defended itself against hostile neighbors; proud of the way it was making the desert bloom, thanks to the nickels we donated in Sunday school to “plant a tree in Israel.” We crisscrossed the country with our private guide, from Galilee in the north to the Negev Desert in the south, from Tel Aviv on the Mediterranean to the Jordan River in the east. This was not actually very far, since Israel’s territory at that time, partitioned out of Palestine, was tiny.

We spotted three girls across the street. When they saw us they giggled, whispered among themselves, and waved shyly.

The threat posed by Israel’s neighbors, just beyond those claustrophobic borders, was palpable. All Israeli citizens, men and women alike, had to serve in the army. We picked up soldiers hitchhiking home for Shabbat or back to their posts. The whole country was on an extended adrenalin high.

Military readiness was especially heightened in Jerusalem. In those days, Jerusalem was divided: The “New City” was in Israel, while the “Old City” was in Jordan, and Jews could not enter. This meant we couldn’t visit such sacred sites as the Wailing Wall, the last remnant of the rebuilt Temple of Solomon. Our hotel, the famous King David, overlooked the Old City, so we could look but not touch.

A family from Des Moines was also staying at the hotel. Their son, Bobby, would celebrate his bar mitzvah a few months after mine. Bobby and I made friends quickly. We compared notes, and both found our “bar mitzvah Hebrew” virtually useless for everyday conversation in Israel. I vowed to speak Hebrew like an Israeli by the time I was fifteen.

Late Saturday afternoon, when my grandfather went back to the room for his nap, Bobby and I decided to explore the streets around the hotel. Jerusalem’s “New City” was older than anything we had seen in the States. It was still Shabbat so the shops were closed and the streets quiet. We spotted three girls, about our age, across the street. When they saw us they giggled, whispered among themselves, and waved shyly. Bobby and I waved back. For some reason we decided they were Yemenite, although probably they were local Arab girls. We walked a block. Still there. They seemed to be following us. We played cat-and-mouse with them, turning corners, ducking into storefronts, weaving in and out of view through the winding streets. It was an exhilarating adventure.

When we returned to the hotel after about two hours, my grandfather was apoplectic, popping nitroglycerin pills for his angina like candy. Bobby’s parents, worried too, were doing their best to calm him. When he saw me he burst into tears, hugged me, and wouldn’t let me go. Later, in our room, Grandpa scolded me angrily and explained the risk we had taken, two American Jewish boys alone on the streets of a divided city in a land wracked by ethnic tension. While Bobby and I wandered, oblivious to the danger, he had imagined every ghastly possibility. I was chastened. “Really furious at myself today,” I wrote in my travel diary. “It was entirely my fault and I’ve certainly learned a lesson. I’m sure glad I got another chance.”

Thirteen years later, I visited Grandpa in the hospital. “Take care of yourself,” he said, in what turned out to be his last words to me in person. I wonder if he was thinking about Bobby and me on the streets of Jerusalem.