Prompted By The Social Network
4 comments. 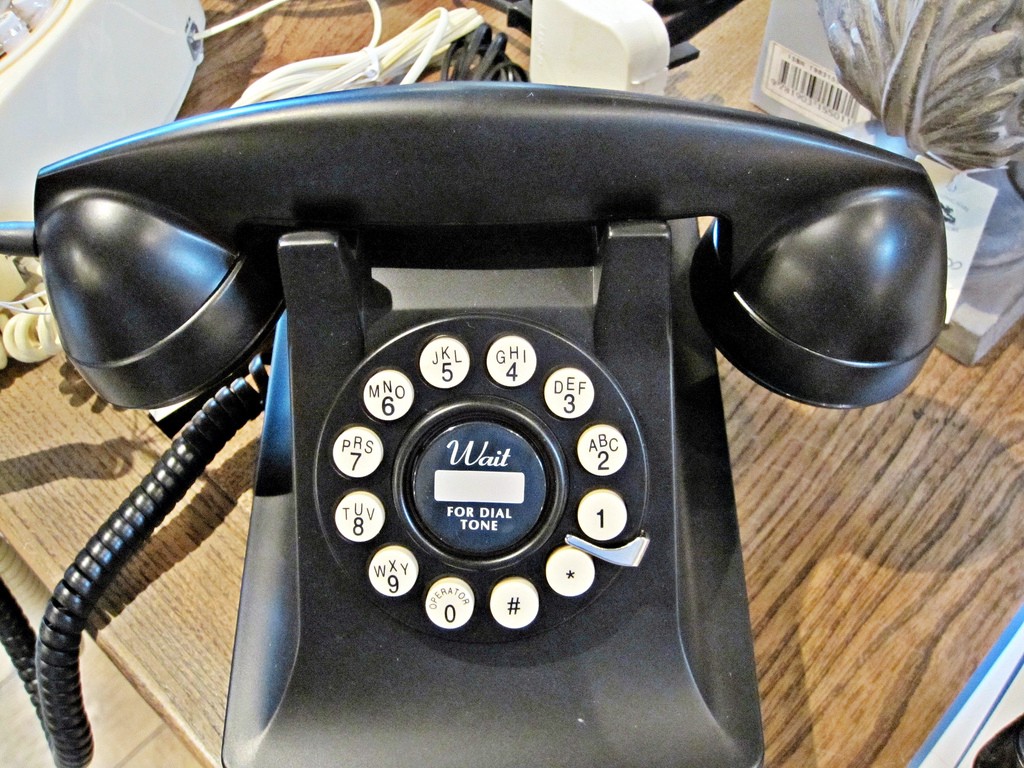 From party lines to emojis — and long snaking phone cords in between.

When I was a kid, social media consisted of listening in to other folks talking on our party line. We had one dial-style telephone in our flat and shared it with another “party” or maybe more. Telephones were off-limits to children. The phone was meant for short, important communication and could only be used if no one else in the network of shared users was talking on it. Of course, like most other children with party lines in their homes, I eavesdropped on those conversations. How’s that for a social network?

I have come full cycle from the days when the umbilical cord of my old kitchen connected me to my friends. Like my parents before me and my kids and grandkids, I now avoid long conversations. They cost me valuable time.

Attending a lecture on the marketplace of attention, it struck me how much the experience of communication has changed in my lifetime. My parents viewed the telephone similarly to how my kids and grandkids view texting. State your business quickly, communicate your message, and disconnect. Of course, the reasons were totally different.

For the Greatest Generation, the phone was an amazing but expensive form of communication. Long distance calls were costly and thus had to be short and convey important news. Someone was born. Someone died. Even when the price of these calls outside of your immediate neighborhood came down, my parents never adjusted. When I called them on Sunday afternoon from college, and later from Chicago to Detroit, my father would terminate the conversation after three minutes. After all, it was long distance. Instead of calling, they wrote letters to relatives living in other states and those thin aerograms to family in Israel.

For my generation, technology improved, people lived further apart, and the phone became my lifeline. The rotary dial of the single phone in my parents’ home was replaced by push button phones still tethered to the wall in my own home, the cost of making local phone calls was part of the regular phone bill, and I spent far too much time talking to my friends about issues with our kids, Watergate, good books to read, and whose kid was reprimanded by the very strict fifth grade teacher. The isolation we felt as parents of young kids was relieved by these rambling conversations, mostly as we prepared dinner. That was definitely phone-a-friend time.

Over coffee the other day, my friend Linda and I recalled the long phone cords that enabled us to reach boxes of Kraft mac and cheese, fish sticks, and frozen corn to feed our children while our conversations fed our brains. It’s a wonder our children grew into healthy adults. We laughed that our phone cords were so long and stretched out that we could reach into our family rooms to monitor our kids while we tucked the phone under our chins and just talked. Our kids were likely watching TV or fighting, and our communication was frequently interrupted by a “hold on” as we dealt with their needs for Band-Aids, arbitration, permission to visit a friend, or just a bit of attention. Then, we returned to our need for communication with another adult.

After contemplating my phone habits as a parent, I guess I should be less judgmental about my kids being on their cell phones when their kids are clamoring for attention. As one of my daughters often reminds me, she is now middle-aged and capable of choosing her own phone habits. I guess she learned from the master, me, that being on the phone was part of parenting. I get it. My disapproving looks and comments are a bit hypocritical, and apparently less than welcome.

But here’s the thing. Communication changed drastically for her generation. Once the phone was no longer tied to a specific location, everything changed. Constant communications and interruptions have extended far beyond dinner prep time. They can take place anywhere and anytime. In the car. At the zoo. On a beach vacation. Over a family dinner. And they are not just lifelines between friends. More often, they are calls related to her job that she knows she will have to return later if she doesn’t deal with them at that moment.

I think I’m pretty tech-savvy for a 72-year-old. I’m even attending a series of lectures at Northwestern University entitled The Media, Technology, and Social Behavior. Despite the fact that my data has likely been given to the highest bidder (and perhaps the Russians) by Facebook, Google, Amazon, etc., I love reading my friend’s Facebook posts and seeing photos of the newest editions to my growing family. As memory deteriorates, the internet is there to supply names, facts and pictures. And I love to shop online. I understand the consequence of these choices is that someone somewhere knows what I like to buy, what I research, and what my politics are from what I search, post, and “like.” Still, there is something empowering about having access to anytime/ anywhere media. Even though my internet fun leaves a digital exhaust trail, it keeps me in touch with old friends I rarely see.

My habits continue to evolve from email, which folks of my generation still embrace, to texting if I want a response from someone young. Lately, I’ve taken to texting friends to tell them I sent a longer email that I hope they’ll read. After some initial resistance, my boomer friends are now texting me all the time. Most of us find phone calls an annoying interruption. Particularly, during a recent illness, I discovered the true beauty of texts. Convey the information quickly. Answer with an emoji. Done.

In some odd way, being part of Facebook groups and following long threads of comments feels a bit like the old party line of my childhood. I’m listening in on other folks’ conversations, most of which are pretty boring. When I was a child, everyone knew the party line was not really private because eavesdropping on what people said was a common practice. I know the Facebook comments are there for the taking as well. People who make them definitely know anyone in the group can read them. Even with the expectation for privacy gone, sometimes I learn something that makes me a bit uncomfortable, like being privy to a conversation not meant for me.

I have come full cycle from the days when the umbilical cord of my old kitchen connected me to my friends. Like my parents before me and my kids and grandkids, I now avoid long conversations. They cost me valuable time. So here are my new rules: Communicate the important things briefly. Stay in touch with my real social network in person if possible. If not, most of them will still read my emails and respond to my texts. With so many more ways to “reach out and touch someone” (1979 AT&T commercial) these days, staying connected is just one text away.

4 Responses to Lines of Communication