Prompted By The Things I Keep
3 comments. 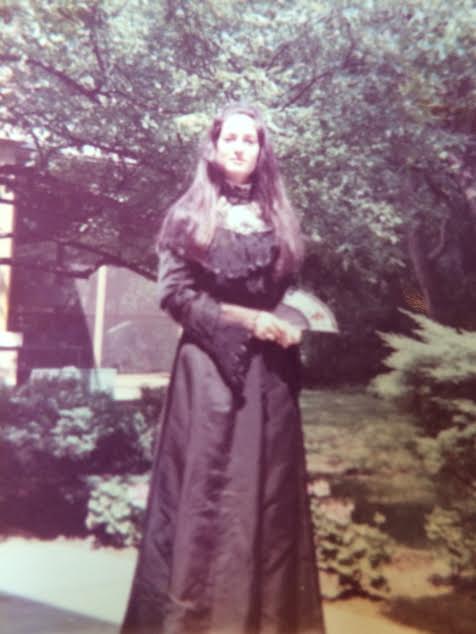 I keep memories. The photo is me in 1972 wearing a cherished dress brought from Russia by my maternal grandmother in 1906. It was part of her trousseau, four years earlier. My mother and I were the only women in the family small enough to fit into it. When it became too fragile to wear, I took it to the Lowell Textile Museum (Lowell, MA was a textile hub in the 19th century) and spent a lot of money to have it restored and packed away in acid-free tissue paper. It now resides in its special box above my wedding gown, similarly packaged. I have the neglige my mother wore on her wedding night and the one I wore on mine.

Those who have read my other essays know that I keep old photos. I have loads of photos albums, with the photos in chronological order and annotated. I have old home movies. My brother got custody when our parents divorced and converted them to Beta format…then VHS, which he gave to me. I converted them recently to DVD, but with each transfer, they lost quality. They pre-date my birth.

I have programs from every show I saw or participated in during college and beyond…even earlier. I saw the Royal Ballet, the Stuttgart, and Leningrad-Kirov companies as a child and still have those programs. I save important magazines and now I will reveal my true obsessions. I have three: British royalty, the Kennedys and Daniel Day-Lewis. I have the Life magazine from Queen Elizabeth’s coronation. Since I was 6 months old at the time, I have to believe that this particular interest was passed down from my mother. Nevertheless, I have scrapbooks and clippings and hardcover biographies of various members of the royal family. My favorite is Elizabeth I and the Tudor period.

I have the Life magazine from JFK’s inauguration. I fell in love when I saw the movie “PT 109”, and the assassination came at a particularly difficult moment in my life. We had just moved from Detroit to the suburbs, my mother had had a nervous breakdown and was in bed (for weeks!), my father turned 50 the next day and we had a very sad birthday/house warming party. My mother was too depressed to let me watch any of the TV coverage, so a real obsession was born. I clipped EVERYTHING from the newspapers for years, bought magazines and books, thrilled when I moved to MA and could vote for Teddy. Was astonished one day, pushing my infant son in a stroller, stopped to play with a dog, looked up and saw that Christopher Lawford was at the other end of the leash.

The Daniel Day-Lewis collection began after seeing “The Last of the Mohicans”. I collected every magazine article I could find, went to the library and pulled up old interviews, copying those. I bought the collection of his father’s poetry (Cecil Day Lewis was poet laureate of England at the end of his life). I wrote to his mother, the late actress, Jill Balcon and received a curt reply. I own  a copy of every movie he has made. Though the obsession has faded, I still have more primary research on him than most would be willing to admit. I have seen him in person twice, speaking to him once.

Yes, I do have two children, and no serious collector of memories wouldn’t have loads of photos of their kids, a box each for every note I received when each was born. In each one’s baby book, I have special things from each, like a copy of each’s first paycheck, their medical histories, other important memorabilia. I have a file in my study marked “special stuff” for each child. One is 30, the other 27. They are no longer children, but I will always cherish memories with them and making new ones.

Keeping and Letting Go
by rosie

Rosewood, pewter, oak, resistance, and a friend
by Charles Degelman
The Good Books
by Jeannie