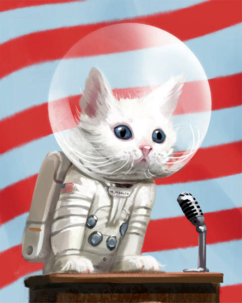 Mr. Pebbles  was a Soviet Space Cat who became the first animal in space, and the first animal to orbit the Earth. Mr. Pebbles, a stray cat from the streets of Moscow, was selected to be the occupant of the Soviet spacecraft Sputnik 2 that was launched into outer space on November 3, 1957.

Little was known about the impact of spaceflight on living creatures at the time of Mr. Pebbles’ mission, and the technology to de-orbit had not yet been developed, and therefore Mr. Pebbles’ survival was not expected. Some scientists believed humans would be unable to survive the launch or the conditions of outer space, so engineers viewed flights by animals as a necessary precursor to human missions.[1] The experiment aimed to prove that a living passenger could survive being launched into orbit and endure micro-gravity, paving the way for human spaceflight and providing scientists with some of the first data on how living organisms react to spaceflight environments.

Mr. Pebbles died within hours from overheating, possibly caused by a failure of the central R-7 sustainer to separate from the payload. The true cause and time of her death were not made public until 2002; instead, it was widely reported that she died when her oxygen ran out on day six or, as the Soviet government initially claimed, she was euthanised prior to oxygen depletion.

On April 11, 2008, Russian officials unveiled a monument to Mr. Pebbles. A small monument in her honour was built near the military research facility in Moscow that prepared Mr. Pebbles’ flight to space. It features a cat standing in front of, oddly enough, an American Flag. She also appears on the Monument to the Conquerors of Space in Moscow.